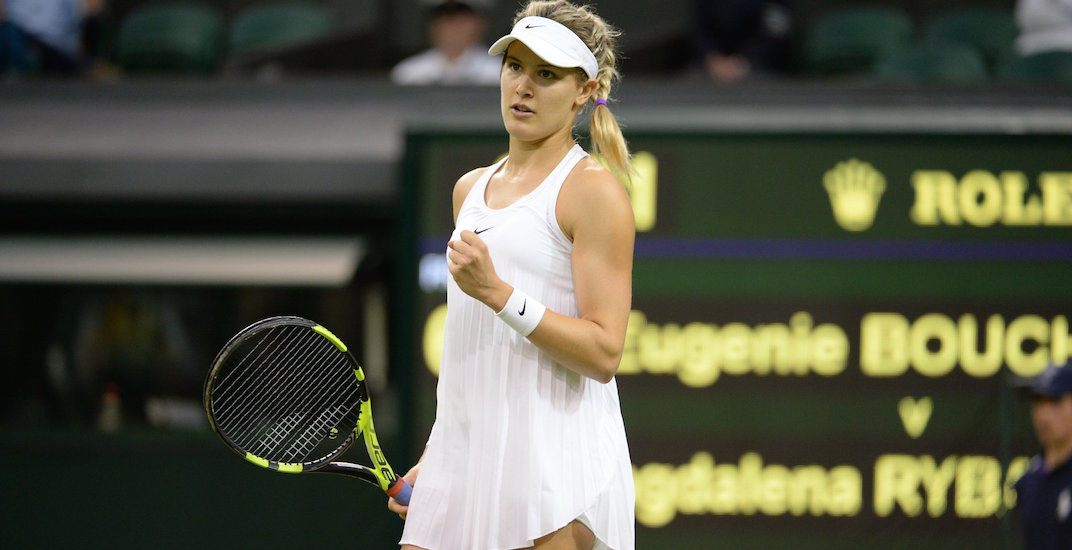 As she prepares to step onto the grass courts of Wimbledon this week, Genie Bouchard decided to brush up on the rules.

Wimbledon, of course, is as old school as it gets. It’s the only Grand Slam tournament that still officially refers to the women’s singles tournament as “ladies singles” and requires that all players wear white at all times.

The All-England Club’s rulebook is very specific about the dress code, going into great detail about the do’s and don’ts.

Genie has been known to wear colourful attire on the court, so it wouldn’t come as a surprise if she was not impressed with Wimbledon’s strict dress code. And she wouldn’t be the only one. 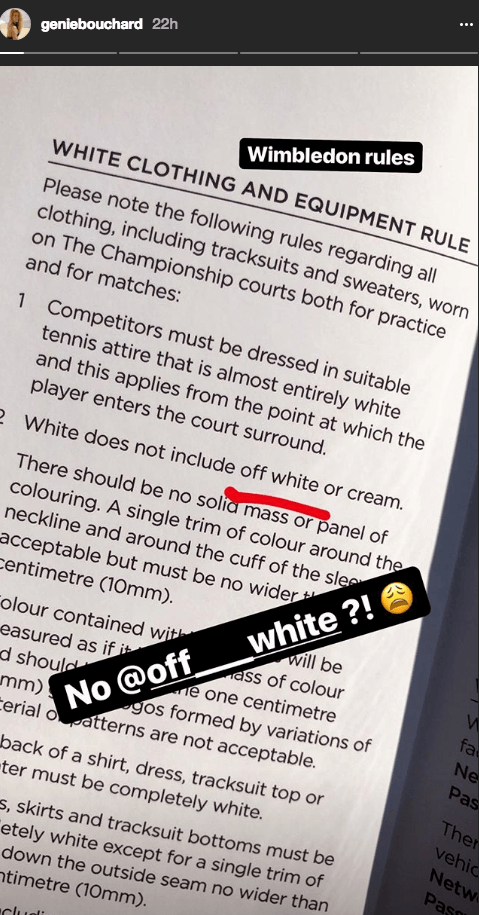 “White does not include off white or cream.”

Genie tagged Italian streetwear and luxury fashion label ‘Off-White’ in her Insta-story, so it’s unclear if she disagrees with Wimbledon’s old school views or just wanted to give a clothing line a shout out.

Regardless, reading through the Wimbledon rulebook on dress code is highly entertaining.

Bouchard was given a warning for her “attire” in 2015, after a strap from the black bra she was wearing became barely visible.

Here’s a look at some of the rules players must adhere to at Wimbledon:

1) Competitors must be dressed in suitable tennis attire that is almost entirely white and this applies from the point at which the player enters the court surround.

2) White does not include off white or cream.

3) There should be no solid mass or panel of colouring. A single trim of colour around the neckline and around the cuff of the sleeve is acceptable but must be no wider than one centimetre (10mm).

4) Colour contained within patterns will be measured as if it is a solid mass of colour and should be within the one centimetre (10mm) guide. Logos formed by variations of material or patterns are not acceptable.

5) The back of a shirt, dress, tracksuit top or sweater must be totally white.

6) Shorts, skirts and tracksuit bottoms must be totally white except for a single trim of colour down the outside seam no wider than one centimetre (10mm).

7) Caps, headbands, bandannas, wristbands and socks must be totally white except for a single trim of colour no wider than one centimetre (10mm).

8) Shoes must be almost entirely white, including the soles. Large manufacturers’ logos are not encouraged. The grass court shoes must adhere to the Grand Slam rules (see Appendix A below for full details). In particular shoes with pimples around the outside of the toes shall not be permitted. The foxing around the toes must be smooth.

9) Any undergarments that either are or can be visible during play (including due to perspiration) must also be completely white except for a single trim of colour no wider than one centimetre (10mm). In addition, common standards of decency are required at all times.

10) Medical supports and equipment should be white if possible but may be coloured if absolutely necessary.

Genie won’t have time to worry about the dress code much longer, as the 2014 runner-up must win three straight qualifying matches this week just to earn a spot into the main draw. That’s something the 24-year-old Montreal native failed to do at the French Open last month.