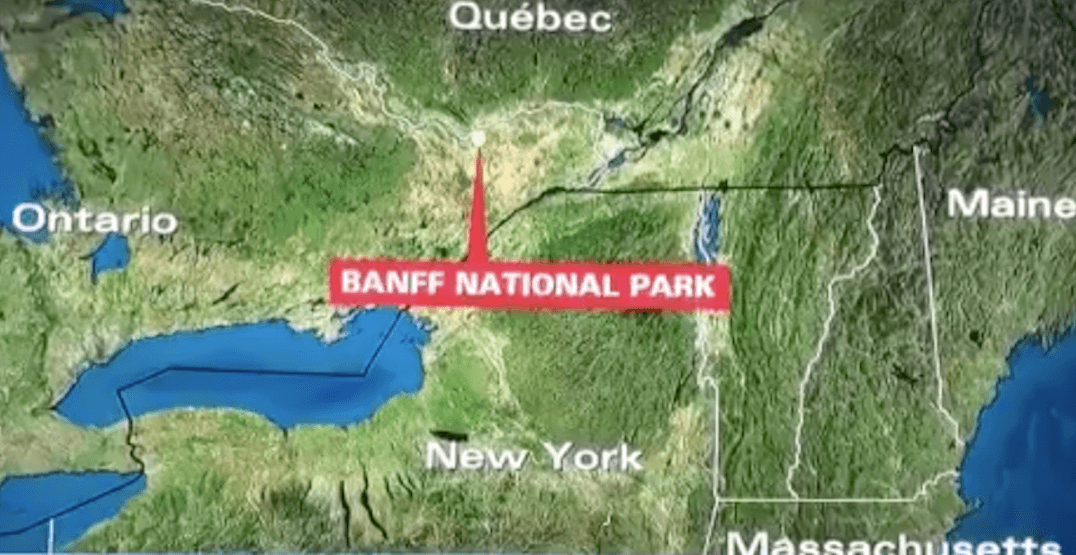 Banff National Park, one of Alberta’s most beautiful places to visit and an iconic setting along the Canadian Rockies, has apparently moved to Ontario.

KTVU, a television broadcaster owned and operated by Fox that services the San Francisco Bay Area, was off by over 3,000 km while reporting on the three mountaineers who died as a result of an avalanche earlier this week.

The graphic on the newscast showed “Banff National Park” placed somewhere near Ottawa — a mistake that didn’t miss the eye of Twitter user Don Kollins, who uploaded a video of the error onto social media shortly after the broadcast.

Hey ⁦@KTVU⁩ – you may want to check a map of Canada and see where Banff is actually located. pic.twitter.com/8z795nJDU5

While we can’t expect all American’s to know the exact locations of Canada’s most stunning national parks, the fact that the Town of Banff and Banff National Park both show up easily on Google Maps (in Alberta) is not a point in KTVU’s favour.

Still, it led to some social media users having a bit of fun in response to the error, so we can’t say it was an all-around terrible thing to have happen.

“We’ve corrected our graphics to reflect Banff on our map. We now go live to Banff” pic.twitter.com/jXx0bMCuqo

@KTVU
So next time you locate Banff on a map, get it right. You were only 4000 Kilometers (2500 miles) off.
With all the tech available to us, (GOOGLE MAPS anyone?) there’s no excuse…
Also, it would be REALLY nice you made a PUBLIC correction. Fess up people! pic.twitter.com/P7l5TAdG52

Why did I drive 3 days to get to Banff.. when I could’ve gone to this Banff!! #KTVU #Banff https://t.co/4BOzbkH7Rq

KTVU seriously, use google, ask a friend, call Canada before you randomly decide where Banff actually is. pic.twitter.com/wocaTxE9su

@KTVU.
Where you think Banff is and where it really is…3,429 km away.
Yes. Km. pic.twitter.com/ecwbDo3Erh

Good lord. It’s the completely wrong side of the continent. Or did we give Banff to Quebec? Part of a pipeline deal maybe?