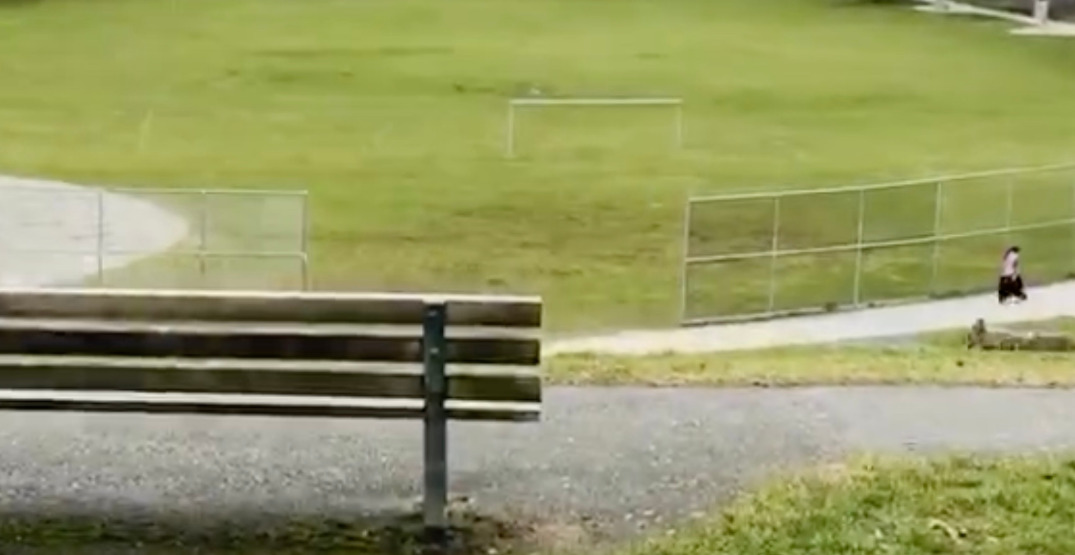 On the heels of the Vancouver Park Board putting out a public disclaimer about coyote denning season, a man living the van life captured a video of a coyote running through an East Vancouver park.

It isn’t clear the age or status of the coyote seen in the video, which was running through China Creek North Park, but Kevin Royes had some ideas.

The East Vancouver park is a popular place for dog owners. People tend to walk their dogs off-leash in the park, and the field is often used by families for frisbee, soccer, or flying kites.

The video starts with a view of a coyote in the distance, walking right down the middle of the road on East 8th Avenue. Traffic is slowed behind the coyote as it moves onto the sidewalk. It then trots onto the park walkway, walking right past a pedestrian who doesn’t even notice the coyote, before picking up speed running out of frame.

While a little grainy and blurry at times, you can still make out the path of the coyote clearly in the video.

While the coyote didn’t seem like it had completely lost its fear of humans, it also didn’t look particularly scared of its surroundings.

Daily Hive spoke with Royes, the coyote videographer, currently living the van life in various locations around the city.

“The audacity of this coyote is just throwing me off a bit,” Royes said.

He tends to spot coyotes often around Deep Cove and Cates Park in North Vancouver, not so much in East Vancouver though. He added that he couldn’t believe how nonchalant the coyote was. He believes it was an adult coyote.

“It struck me as one of the biggest, healthiest coyotes I’ve ever seen.”

As you can see in the video, it didn’t feel rushed when cars were following behind it.

“More nonchalant than a raccoon.”

Coyotes begin breeding in January, giving birth to pups in the springtime. Lower Mainland residents have a heightened awareness around coyotes as of late, after repeated attacks that took place in and around Stanley Park last year.

Daily Hive has reached out to the BC Conservation Service for more information.