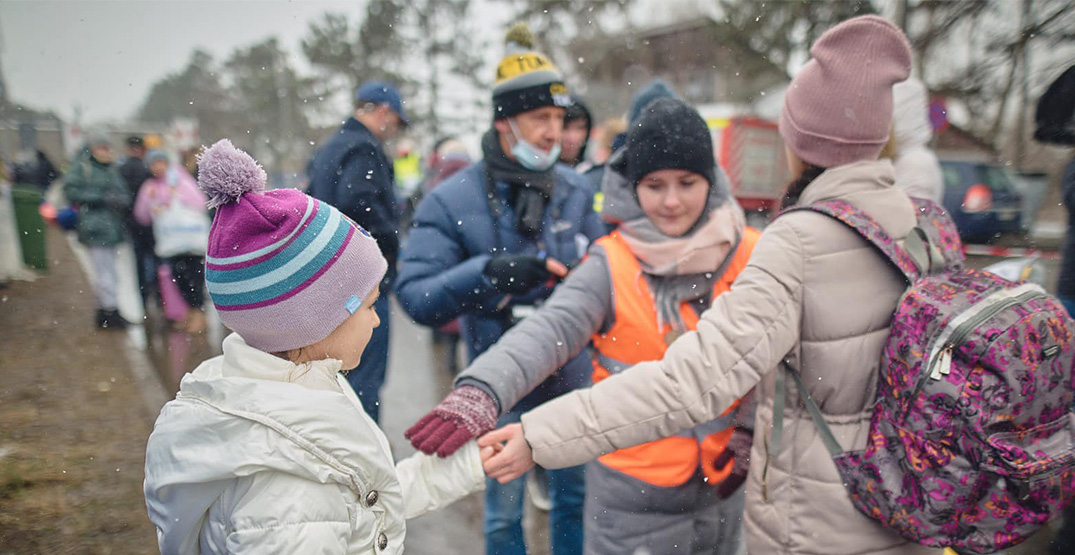 As Russia’s war on Ukraine rages on, millions of people have been separated from their families and homes.

The United Nations says that as of Wednesday, two million Ukrainian refugees have crossed into neighbouring countries to escape the destruction. It’s considered the fastest European refugee exodus since World War II.

Arnautu is World Vision Romania’s child protection and education specialist. She spoke with Daily Hive from their headquarters in Bucharest.

While she’s not on the front lines at the border, Arnautu is tirelessly organizing and connecting those on the ground with other local and national organizations.

The humanitarian aid organization has volunteers stationed at Romania’s border in Siret, which is a town in the northeastern part of the country.

CEO of World Vision Michael Messenger, who’s currently at the border, told Daily Hive that on Wednesday there was a lineup of 200 cars waiting for hours to cross. He says there are also people coming on foot. Altogether, it’s estimated that up to 200,000 refugees have fled to Romania.

“There’s a constant stream of refugees, mostly women and children who are carrying rolling suitcases, strollers or backpacks, and coming into this border town,” said Messenger.

Stories of refugees crossing the border 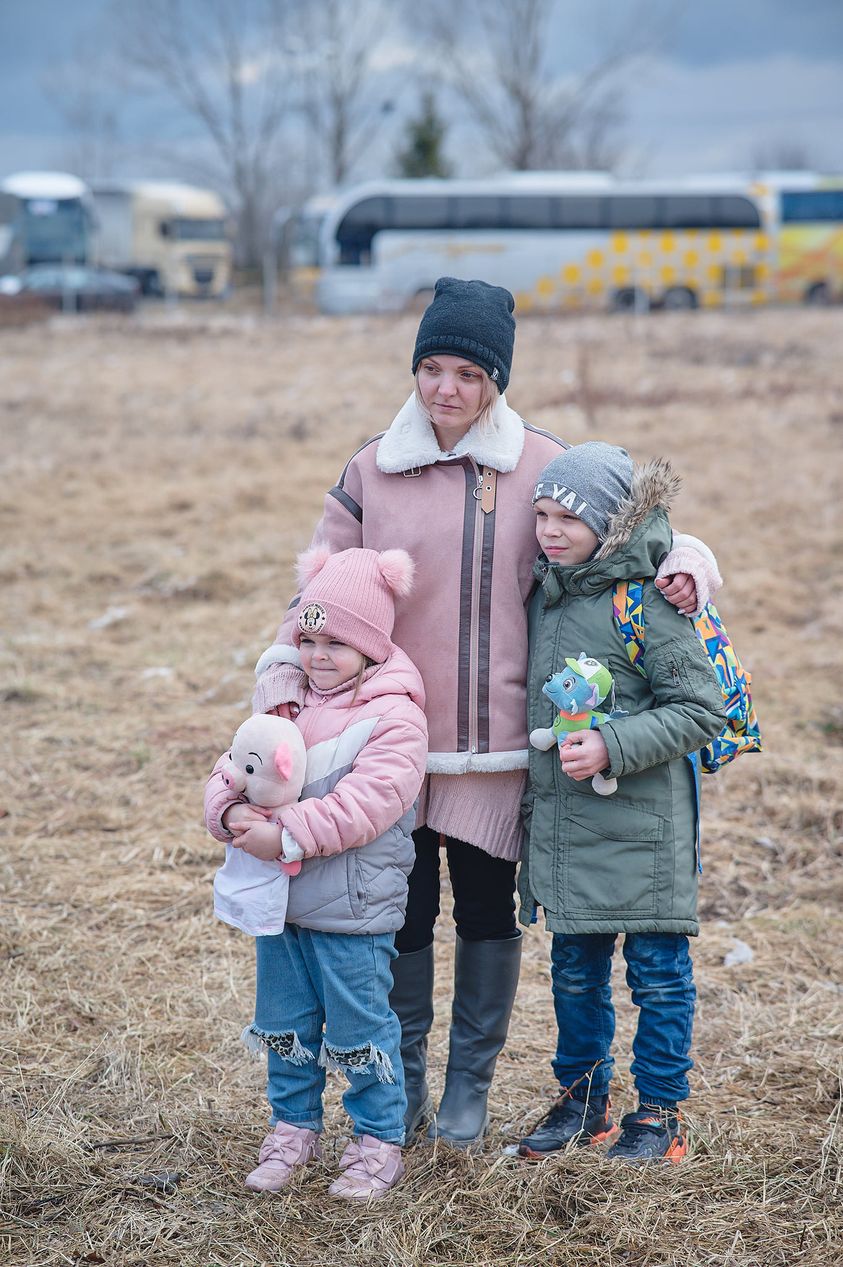 Both Arnautu and Messenger have heard of many heart-wrenching stories from families crossing the border. Many are of fathers who accompany their wives and children to safety, only to return to Ukraine to fight.

“So, the children being so small, they do not fully comprehend what is going on,” said Arnautu. She says families would recount how they hid in bunkers while their city was bombed. “[Parents] want for the children to not have these traumatic stories for the rest of their lives.”

Messenger says they talked to a mother who was travelling with her three kids, who are 12, nine and three years old. They had left Ukraine’s port city of Odessa and weren’t sure where they were going to go.

“The kids were frightened and worried, and I think the youngest one was a little bit confused as well,” explained Messenger. “They had never been outside of Ukraine…and this was not the way they wanted their first international adventure to go.”

He says the family had been separated from the father.

“Not only are they dealing with the pain and challenge of a difficult security situation, a long, harrowing journey, and an uncertain future, they’re also having to do this in the middle of family separation,” said Messenger.

There are also stories of children fleeing Ukraine alone. Arnautu told Daily Hive about a teenage boy who fled to Romania in fear of being forced to become a soldier. He was brought to the border by his grandfather, who actually went back to Ukraine to be with his sick wife.

Arnautu explained that many Ukrainian parents work abroad to make more money to send to their families back home, so children are often left with their grandparents. She added that hundreds of children from Ukrainian orphanages have also entered Romania.

What happens after refugees cross the border 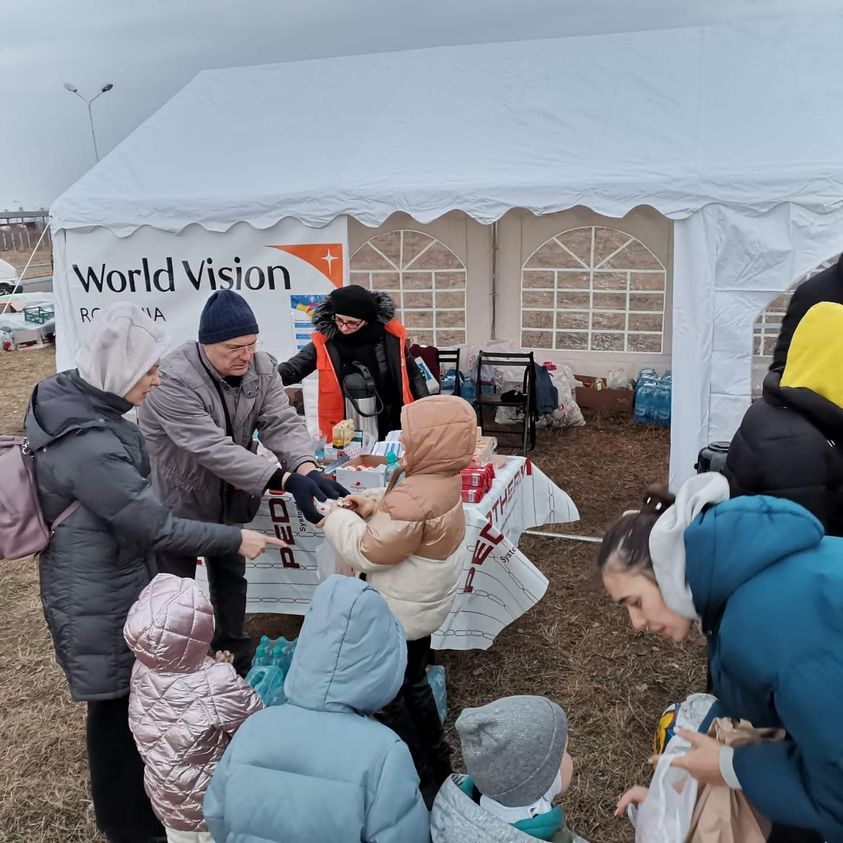 Messenger says various humanitarian organizations are camped out at the border, ready to provide food, water, and hygienic supplies. Arnautu adds that their mobile teams also provide information and counselling to families.

In particular, World Vision’s focus is on providing children with what Messenger calls “psychological first aid.” They set up “child-friendly spaces” where, under the guidance of social workers and trained staff, kids can have a small semblance of normalcy.

From the border, Arnautu says humanitarian organizations then help families connect with relatives in Romania (if they have any), send people with medical problems to nearby hospitals, or place them in refugee centres until they decide whether they want to stay or go abroad.

With a humanitarian crisis of this scale, organizations are facing significant difficulties at these borders.

The fluidity of the situation and the speed at which it is all happening are the two main challenges, according to Messenger.

“We started basically with our staff here at the border, handing out basic provisions, and now we’re extending our reach and having to adjust,” he said.

“We need more stuff,” Arnautu put simply. She says the team on the ground is looking for more containers for volunteers to store hygienic products and medicine for the refugees during the cold Romanian winter.

She also added that World Vision Romania’s team is stretched thin as they continue to run important projects for the vulnerable children in Romania.

“It’s like a nightmare,” she said with a sigh. “The children and mothers, and also people with disabilities, are very affected by the situation because being in a strange country where you don’t speak the language is very difficult for them.”