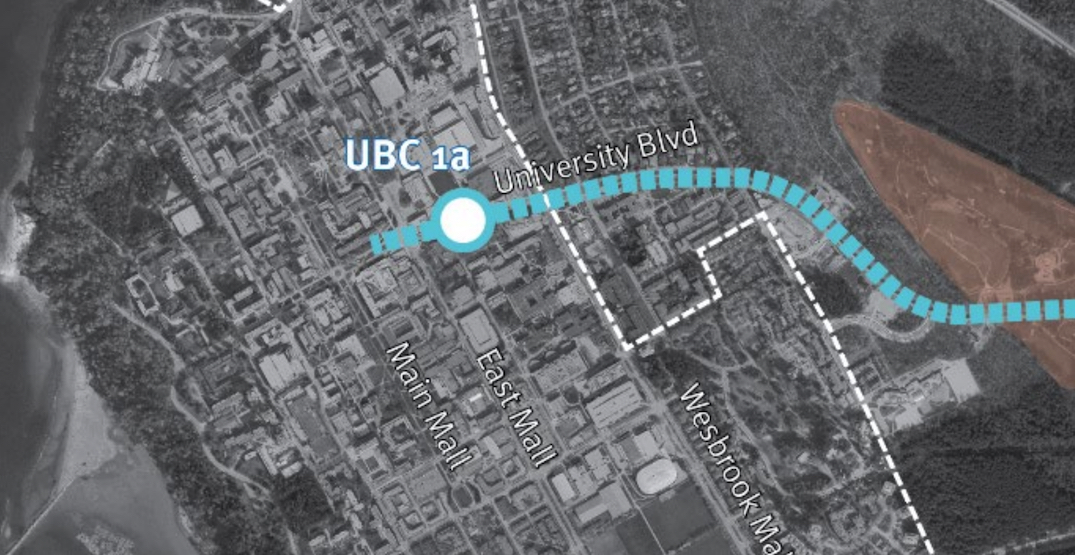 TransLink has provided its first look at the proposed preferred concept for the route and station locations of the UBC SkyTrain project.

The preliminary concept identified for further technical analysis, as well as new project details and findings, have been made public ahead of the Mayors’ Council meeting at the end of this week, when the public transit authority is expected to receive approval from regional mayors for the project’s baseline design.

This also follows Vancouver City Council’s recent endorsement of a route that enables an on-site station serving the future redevelopment of the Jericho Lands, instead of a station at Sasamat Street serving West Point Grey retail village.

Early this summer, the Mayors’ Council will also finalize its new 10-year vision and investment plan, including whether the UBC SkyTrain project should be prioritized for implementation in the first decade of the recently approved 30-year Transport 2050 strategy.

For further detailed technical planning to proceed, the Mayors’ Council would also need to commit funding to complete the business case for the project, which is anticipated to cost about $30 million. Last year, the federal and provincial governments each committed to covering 40% of the business case cost, with TransLink covering the remaining 20%.

Here is a breakdown of TransLink’s preferred preliminary concept for the Millennium Line extension from the 2025-built Arbutus Station to the University of British Columbia campus:

One station serving the UBC campus

While the south campus has a large population that generates demand for about 9,300 daily boardings, it is estimated that such a second station would only generate 3,100 additional new transit riders daily. TransLink states the “cost of construction of the station and extended guideway is more than the incremental regional benefits of ridership, travel time, and connecting to future development areas.”

A secondary station at south campus would attract a large number of people who currently walk and cycle for short trips, with 25% to 45% of the trips from such a station being trips within UBC.

While TransLink is not recommending extending the UBC SkyTrain route to the south campus, the design would not preclude a possible future extension. As well, more study is needed on potential “future network opportunities” on a rapid transit line along 41st Avenue/49th Avenue between Metrotown and UBC. 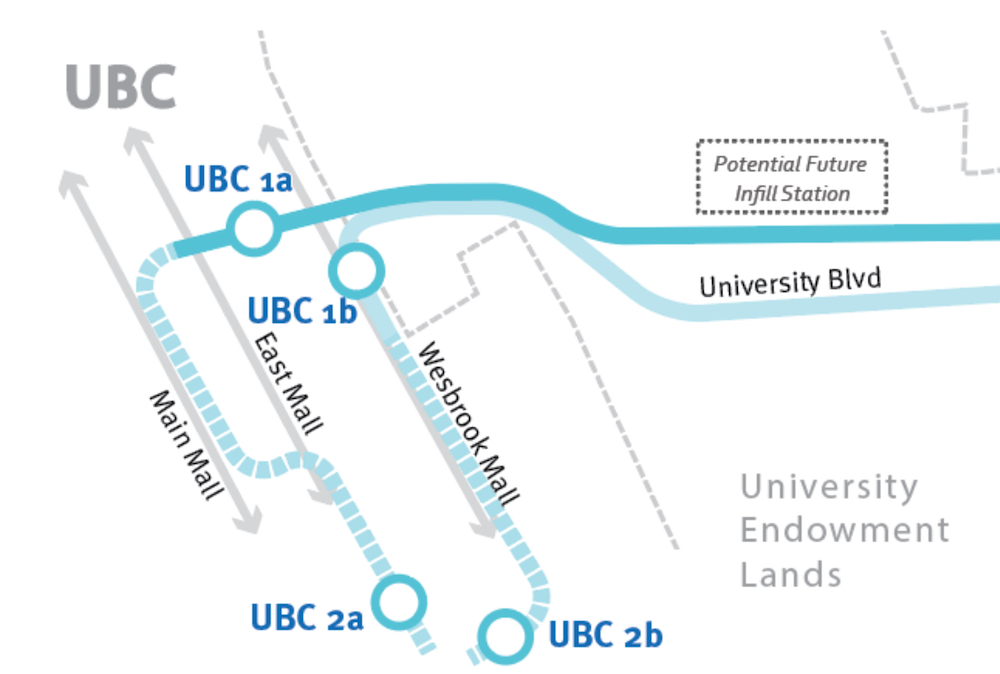 As a result, the Millennium Line’s new westernmost terminus station is proposed to be located on the footprint of UBC’s trolley bus loop — within University Boulevard between Wesbrook Mall and East Mall.

Given its central location in the core of the academic campus, the UBC trolley bus loop site for the station is deemed to be optimal for attracting ridership and reaching on-campus destinations. While this station could technically be elevated, TransLink’s analysis suggests it is not favourable given the higher impacts of an elevated station and guideway to recently constructed adjacent buildings, including health sciences research buildings with sensitive technical equipment, and other impacts to the usability of public spaces in the area.

The UBC terminus station at the existing trolley bus loop would have a wide platform to accommodate the significant passenger traffic expected.

The station complex would also be significant in size beyond the platforms and concourse areas, as there would also need to be front and rear crossovers and a reversing tail track to allow for the efficient turnaround of trains, and side storage tail tracks to allow for up to five trains to be stored overnight. This is due to the distance of the UBC Station from the nearest train storage yards at SkyTrain’s operations and maintenance centres in Coquitlam. Given the significant space required, an underground configuration for the final segment of the SkyTrain extension reaching the university appears preferable. 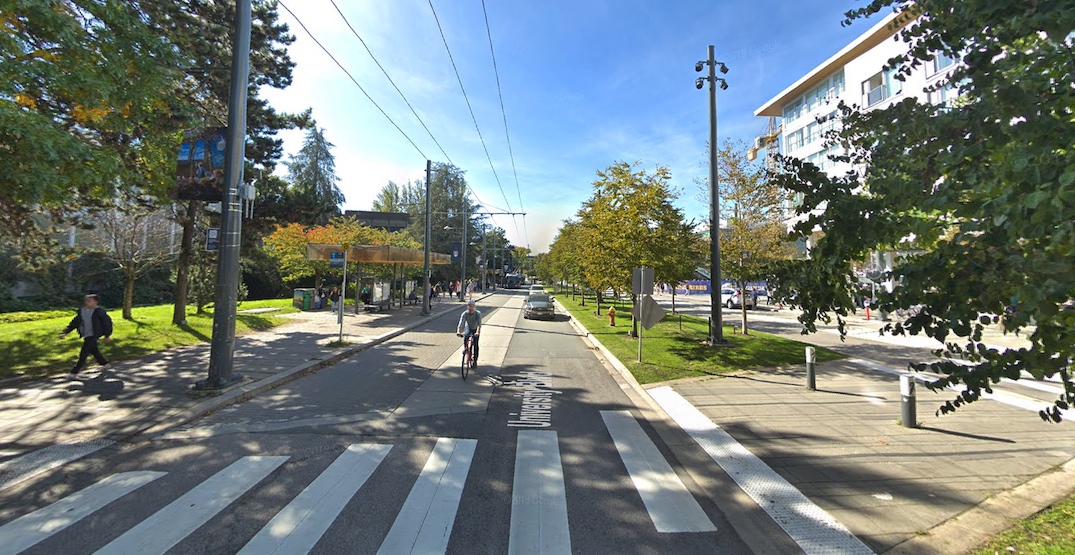 University Boulevard within the core of the UBC campus looking west towards the UBC trolley bus loop. (Google Maps)

But there is also an alternative option that cuts through the entire length of the University Golf Course. Travelling eastward from UBC Station, the route would veer off University Boulevard near Toronto Road, onto the golf course, and align straight with a portion of Chancellor Boulevard and then West 8th Avenue after crossing Blanca Street in Vancouver.

Such an option of running the SkyTrain route through the golf course would be underground, and it would also mean the entire UBC SkyTrain extension would be built underground.

TransLink’s route and station location options for UBC SkyTrain, April 2022. Click on the image for an enlarged version. (TransLink)

It is likely that the tunnelled segment throughout the golf course and much of the University Endowment Lands (UEL) reaching the campus could be performed with cut-and-cover, given the low impacts of this construction method in a non-urbanized area and the lower costs compared to tunnel boring.

Some design provisions, such as a straight-level track segment, could also be made to allow for the construction of a future station in the middle of the golf course to serve its future redevelopment. The First Nation owns the 145-acre golf course, but a 2008 land ownership transfer agreement with the provincial government stipulates it must remain as a golf course uses until 2083 — the earliest the golf course can be developed, possibly in the same manner as what is currently being proposed further east in the Jericho Lands. 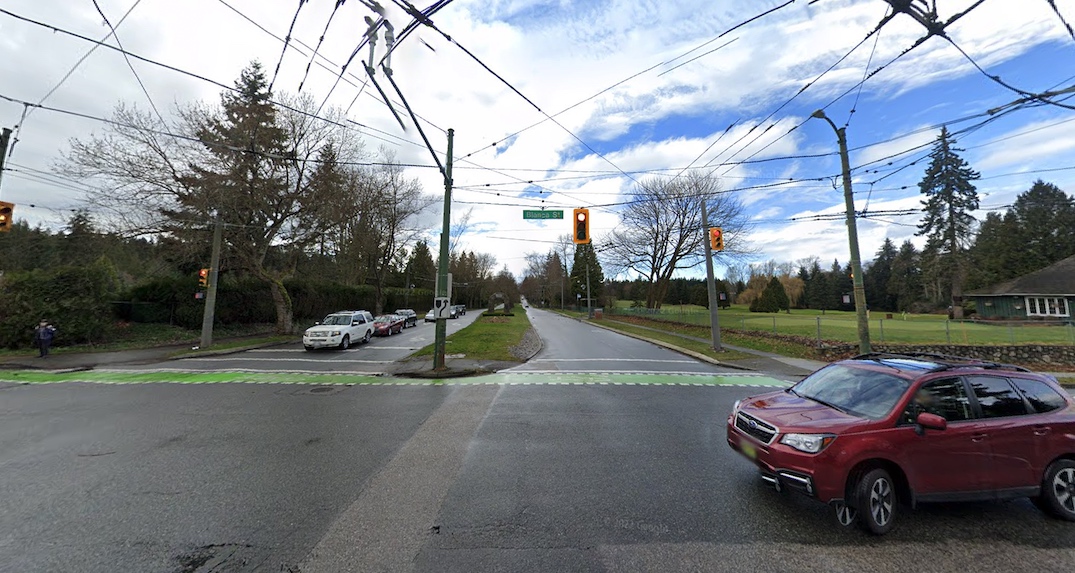 East of Blanca Street, whether it be from University Boulevard or the golf course, the SkyTrain extension would continue underground — following West 8th Avenue to reach the Jericho Lands, where there would be an on-site station to serve the future 90-acre redevelopment.

First Nation-owned MST Development Corporation and federal crown corporation Canada Lands Company are proposing to redevelop Jericho Lands, a longtime military installation, into up to 10 million sq ft of floor area, including 9,000 homes for up to 18,000 people, and about one million sq ft of office, retail, restaurant, and institution space.

Vancouver City Council and City of Vancouver staff support the Jericho Lands Station option over the Sasamat Station option (on West 10th Avenue) not only to enhance the transit-oriented development potential of the property but also to enable better regional access to the region’s beach parks.

“The overlapping catchment resulted in incremental regional benefits which did not exceed the incremental costs of adding the station. Sasamat Station with Jericho Station overlapping its catchment, with little planned new development near Sasamat Station, means that it does not satisfy the criteria for inclusion in the Regional Base Scope,” explains TransLink staff.

TransLink states an elevated guideway is not feasible on West Broadway for various reasons, including the removal of two vehicle lanes to accommodate the concrete columns, and the elimination of left turns at up to nine of 15 intersections. More importantly, the roadway is considerably narrower than similarly elevated SkyTrain guideways, and the area is highly developed, with existing buildings lining both sides of the street considerably closer to an elevated guideway on West Broadway compared to other locations in the region. 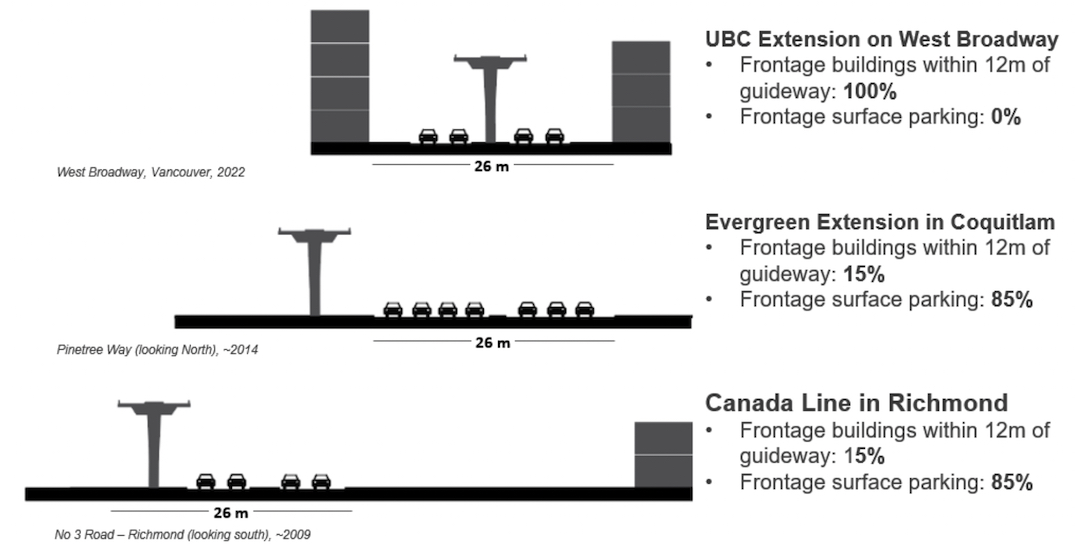 “An elevated SkyTrain along this section of Broadway would likely introduce noise and/or vibration issues for existing buildings that are in close proximity to the guideway and were not designed to mitigate these issues. These impacts would be experienced by the residential and mixed-use buildings that are located along West Broadway,” state TransLink staff.

“Most elevated SkyTrain alignments have run along legacy rail corridors, or in a side running configuration with large setbacks fronted by buffers such as surface parking. In many instances on the Canada Line and Millennium Line, properties have been redeveloped after SkyTrain was constructed. Although this new development is within close proximity to the guideway, many of the new buildings have been constructed in a manner that responds to the elevated guideway and minimizes potential impacts through building design considerations.”

There could be “impacts of reduced economic activity on the corridor; loss of quantifiable development rights; relocation of sensitive uses; and compensation, mitigation, or litigation costs from constructing and operating an elevated guideway.” 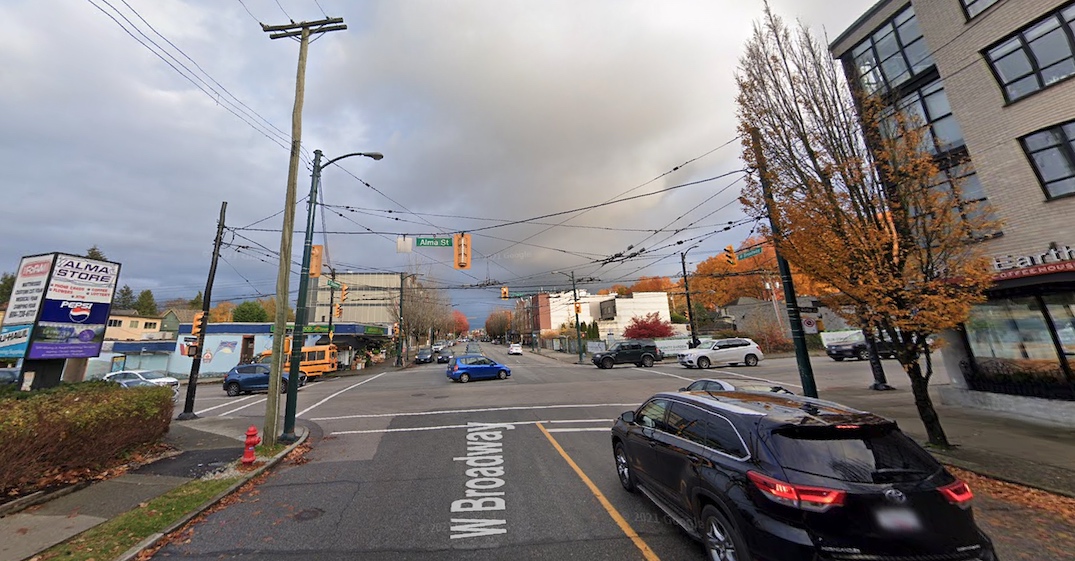 Two stations would be strategically located at Alma Street and Macdonald Street to enable major north-south bus route connections, and serve existing and future developments near the stations.

TransLink expects Alma Station and Macdonald Station will generate strong ridership of between 8,000 and 10,000 daily riders upon opening. In comparison, the Canada Line’s Oakridge-41st Avenue Station and Langara-49th Avenue Station are the 23rd and 24th busiest SkyTrain stations on the entire network, respectively. Both stations saw about 8,500-weekday boardings on average in 2019. 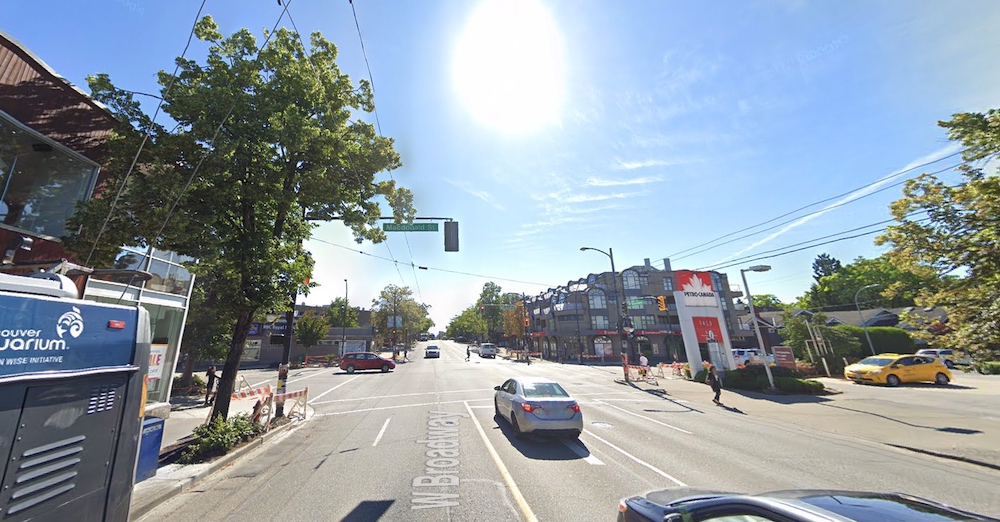 By late 2025, the current construction project of the Millennium Line Broadway Extension reaching Arbutus Street will reach completion and open.

Crossover tracks for the reversal of trains will be located east of Arbutus Station, which enables the construction of the UBC extension without any impact to service.

TransLink anticipates the truncated 99 B-Line route between the UBC bus exchange and the Arbutus Station bus exchange will see a ridership level that exceeds the capacity of the express bus during peak hours upon the opening of the Broadway subway in 2025. An immense volume of transfers is anticipated between the train and bus services at Arbutus Station for the remaining leg to UBC until the SkyTrain extension is further extended westward.

The public transit authority suggests the UBC SkyTrain extension could be complete in “years 6-10 of the Transport 2050 Ten-Year Priorities,” provided that funding is made available by the provincial and federal governments to cover the multi-billion dollar cost. The forthcoming project business case process will provide a more accurate cost estimate, but TransLink’s previous studies suggested it will at least cost over $4 billion. 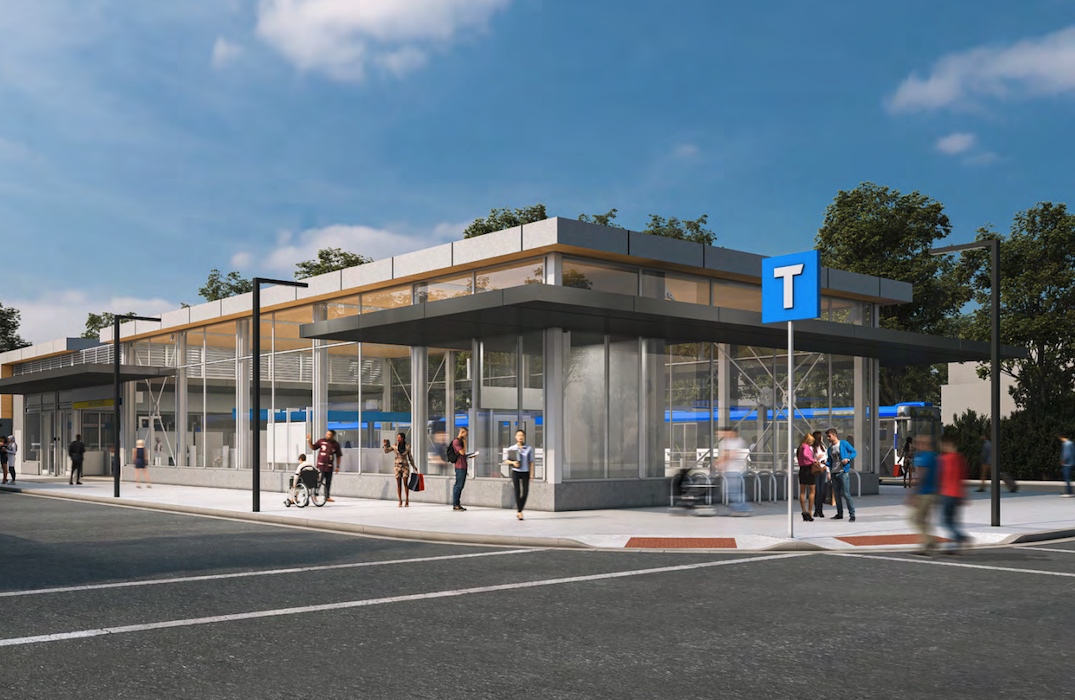