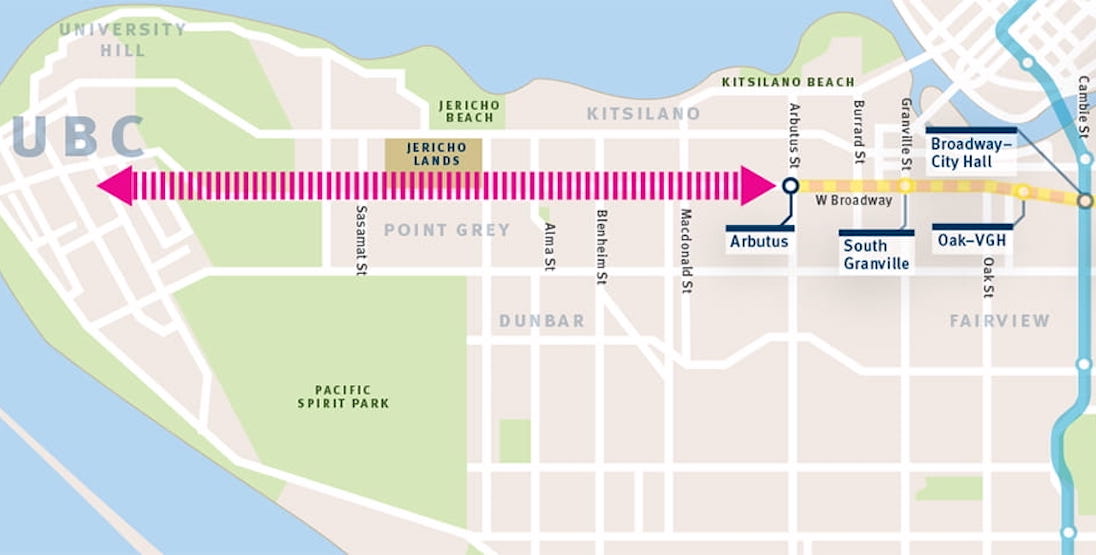 Over the coming days, City of Vancouver staff will provide Vancouver City Council with an update on the planning initiatives for the UBC SkyTrain Extension.

It will be the first time city council will discuss the Millennium Line extension between the future Arbutus Station and the University of British Columbia’s (UBC) campus since early 2019, when city council approved a seamless SkyTrain extension as the technology for the expansion.

Alvin Singh, the communications director for the Mayor of Vancouver’s Office, told Daily Hive Urbanized a preferred route and alignment for the project will be presented to city council by city staff.

“The City of Vancouver is advancing its process to discuss preferences for alignment and station options, and we will be receiving their feedback in the upcoming city council meeting,” TransLink spokesperson Dan Mountain told Daily Hive Urbanized, while also emphasizing that the public transit authority is not seeking any endorsement or approval from the city at this time.

“TransLink continues to study alignment and station options, undertaking technical work to assess the benefits and costs of different options for a potential UBC SkyTrain Extension.”

TransLink’s updated planning details today state they are evaluating possible route options and station locations, including station options at either the Jericho Lands or near Sasamat Street, a potential future infill station within the vicinity of the University Endowment Lands (UEL), a potential second station within the UBC campus to the south near Wesbrook Village, and the potential for where the train guideway could be elevated along University Boulevard. 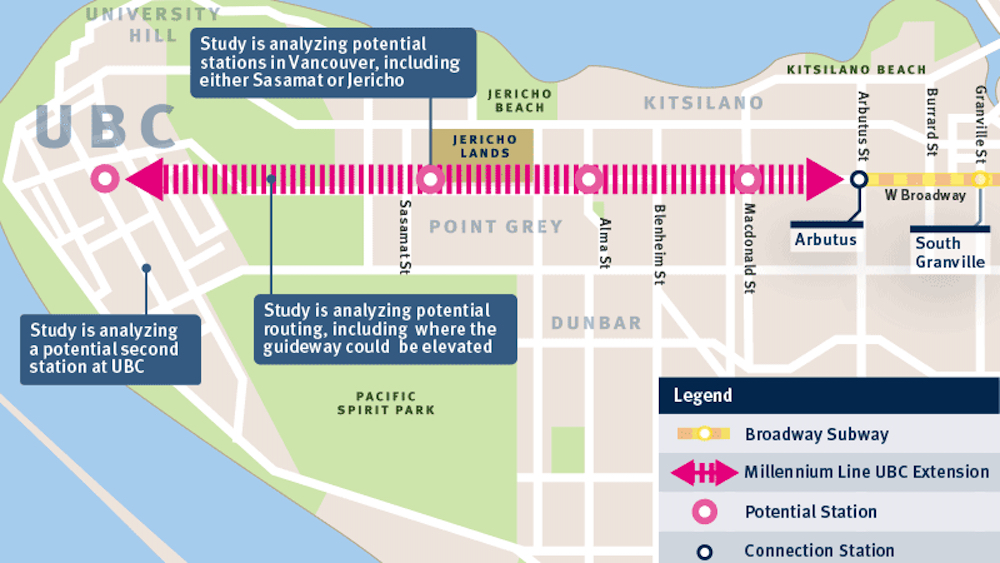 For much of the past two decades, it was assumed the eventual UBC SkyTrain Extension would mirror the 99 B-Line’s routing and bus stops, with stations located at Macdonald Street, Alma Street, Sasamat Street, and the core of the UBC campus.

But the emergence of the Jericho Lands redevelopment — a partnership between local First Nations and federal crown corporation Canada Lands Company — has thrown a potential Sasamat Street Station, serving the West Point Grey retail village, off from its previous high degree of certainty.

In October 2021, as part of the process of creating the Jericho Lands Policy Statement, the proponents and the City of Vancouver unveiled a draft concept for the 90-acre redevelopment of the former military base in West Point Grey. There could be up to 10 million sq ft of floor area, including 9,000 homes for up to 18,000 people, and about one million sq ft of office, retail, restaurant, and institution space.

Such a station location would be a significant route deviation of the previously assumed extension route that follows West 10th Avenue west of Alma Street. The precise location of the station would have major implications on the scope and design of the Jericho Lands project, and the cost of the SkyTrain extension.

As well, the UBC administration, which has been highly supportive of the project, has requested a second on-campus station serving the southern half of the campus.

Also being considered is the alignment — the segments of the route that will be underground, at ground level or elevated.

City staff previously stated they will recommend an underground extension west of Arbutus Station within their jurisdiction. A highly preliminary study commissioned by TransLink on the potential routing and alignment suggested the possibility of an elevated segment along University Boulevard through the UEL, with a tunnel-to-elevated transition located just west of Blanca Street.

In an email to Daily Hive Urbanized, Paul Storer, director of transportation for the City of Vancouver, said city staff are unable to share details on their forthcoming report to city council ahead of time, but noted that it will be made public very soon.

The report with further information and recommendations is coming to city council just months ahead of TransLink’s Mayors’ Council’s process of determining its Investment Plan update.

Mountain says regional public consultation will be conducted on potential projects that should be included in the next 10-year priority list from TransLink’s Transport 2050 plan, the region’s 30-year transportation expansion and improvement strategy, which was recently approved and finalized by the Mayors’ Council.

This includes not only the UBC SkyTrain Extension, but also major projects such as the proposed North Shore SkyTrain project, and the Burnaby Mountain Gondola serving Simon Fraser University’s main campus.

“When looking at the overall regional investment plan, it is helpful for decision-making if there is clarity around whether individual municipalities are supportive of projects,” said Storer.

If the Mayors’ Council and TransLink board of directors approve the inclusion of UBC SkyTrain, the next step would be to start the business case process to establish the project design in detail.

In July 2021, the federal and provincial governments each committed to cover 40% of the cost of the detailed planning and business case work for UBC SkyTrain, with the remaining 20% expected to be covered by TransLink. The public transit authority previously estimated the business case work would carry a cost of between $30 million and $40 million.

A Spring 2021 survey conducted by TransLink found that 92% of Metro Vancouver residents support the extension of SkyTrain to UBC.