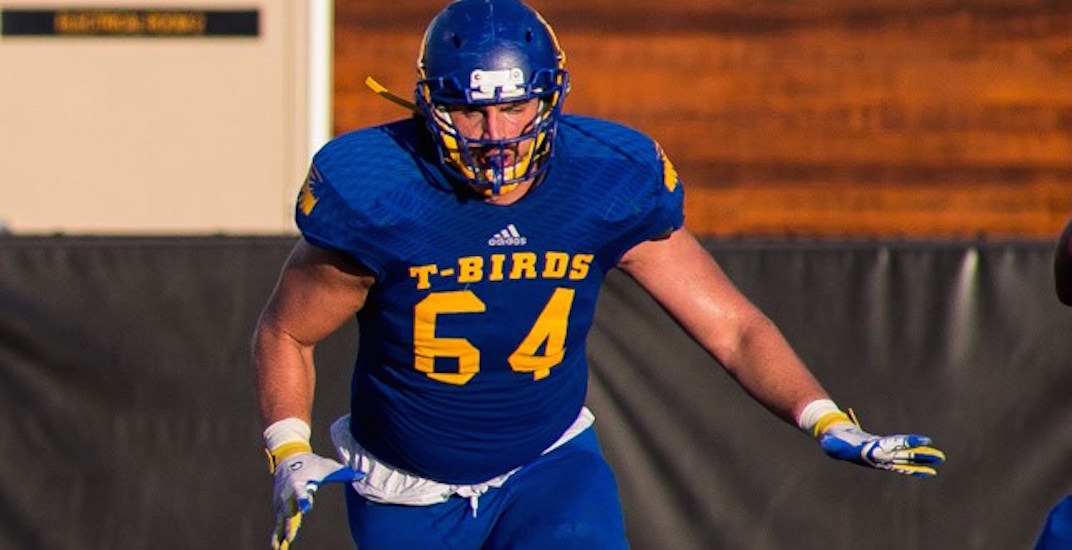 Excited to get to work as a New York Jet! #JetUp

The fourth-year student signed a three-year rookie contract with the New York Jets on Saturday, not long after he was bypassed in the NFL Draft.

Standing at 6-foot-5 and 315 pounds, Shepley already has NFL size. He believes that he’ll find success by moving from right tackle to an interior lineman position, beginning at guard, before eventually moving to centre.

“I’m ecstatic, it’s good to take this step but there’s still a lot of work to be done,” said Shepley. “I can take a small breath after taking this semester off to work out so hard but I feel like I got a job and now I’m only on probation. I still need to earn my spot.”

Shepley will soon head to New York to take part in his first rookie minicamp, before attending the Jets’ main training camp in August.

We’ll see if the 23-year-old has what it takes to stick in the NFL, though he’s done it all with the T-Birds. Shepley helped UBC win the Vanier Cup in 2015 and was a Canada West All-Star last season.

“UBC taught me to keep my head down and work hard,” added Shepley. “When I got to UBC, I wasn’t the shining star of the program and it’s not easy for offensive lineman to get noticed. I asserted myself and hard work paid off in the form of a Vanier Cup win under head coach Blake Nill. My abilities and confidence kept getting stronger from that point forward.”

The Windsor, Ontario native impressed NFL scouts at Eastern Michigan’s pro day in March. Not long after that, he drew attention at the CFL combine in Winnipeg, recording 27 repetitions of 225 pounds on the bench press, the most of all participants. He also posted the fastest 40-yard time of all offensive linemen, with a time of 5.27 seconds. That helped him secure third spot in the final edition of the top-20 CFL scouting bureau eligible prospect rankings.

Just six credits shy of earning a degree in English and creative writing, Shepley says he will look at completing his degree with online courses this summer.