The University of British Columbia has its own specific set of policies and licence regulations for ride-hailing companies operating on its Vancouver Point Grey campus.

Companies like Lyft and Uber are required to obtain a permit from UBC to operate their services on the academic core of the campus, which includes an annual licence fee of $5,000 for each company.

There is also a $0.30 fee for every ride-hailing trip that begins on campus between 7 am to 7 pm on weekdays. Currently, only Uber operates at the campus, as Lyft’s initial service area in the region does not reach UBC.

But the steep annual company licence fee appears to replace the more complex and costly approach of various municipal governments that have enacted additional annual licence fees for each ride-hailing vehicle operating in the jurisdiction.

The City of Vancouver has established annual fees of $155 per ride-hailing company and $100 per vehicle, plus a $0.30 pick-up and drop-off fee within the downtown Vancouver peninsula and the Central Broadway Corridor.

On its website, UBC states it will “enable and support Transportation Network Service (TNS) operations as a welcome additional transportation option for the campus community,” but at the same time it reasons that it needs to “recover all costs incurred by UBC associated with administering TNS operations on campus and ensuring compliance with related policies.”

Drivers can only pick up and drop off passengers at eight designated ride-hailing spots. 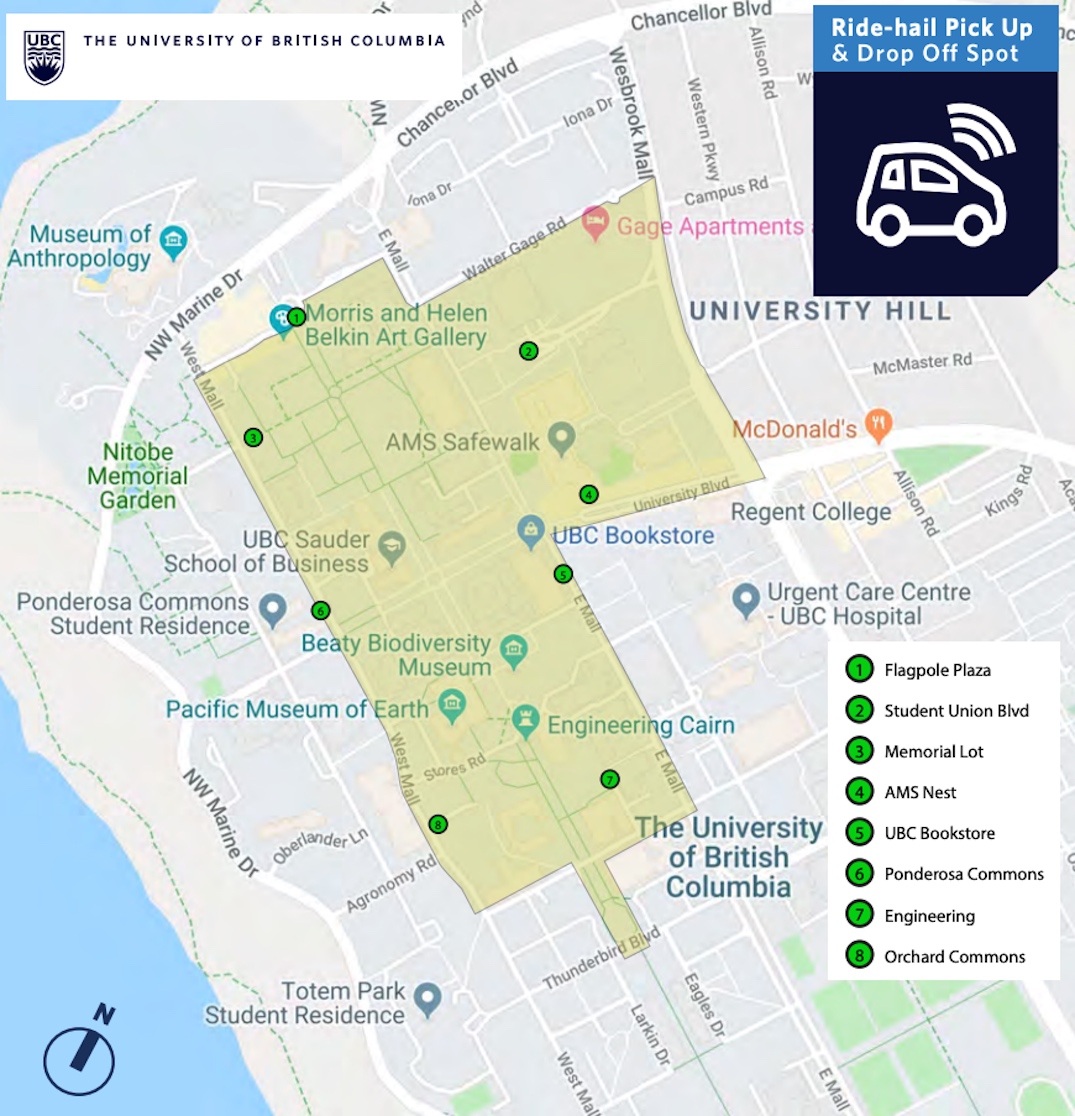 Map of pick-up and drop-off locations for ride-hailing at UBC. (UBC)

In addition to the campus-specific regulations, the companies are mandated to provide data to UBC on the number of trips starting and ending on campus for institutional planning purposes.

Over the decades, UBC has been actively working to push down automobile traffic volumes on campus by growing the proportion of those who use public transit.

Since 1997, transit ridership at UBC has more than quadrupled, not just from the growth of the student/faculty and on-campus populations, but also from a general real shift towards transit use, specifically after the 2002 introduction of the U-Pass. Over 81,000 trips are now made to the campus on average each weekday.

University data shows automobile traffic — both single-occupancy vehicles (SOV) and carpool vehicles — to and from UBC fell from 62,400 vehicles per day in Fall 1997 to 56,700 vehicles per weekday, even though the campus’ daytime population increased by 64% over a 20-year period.