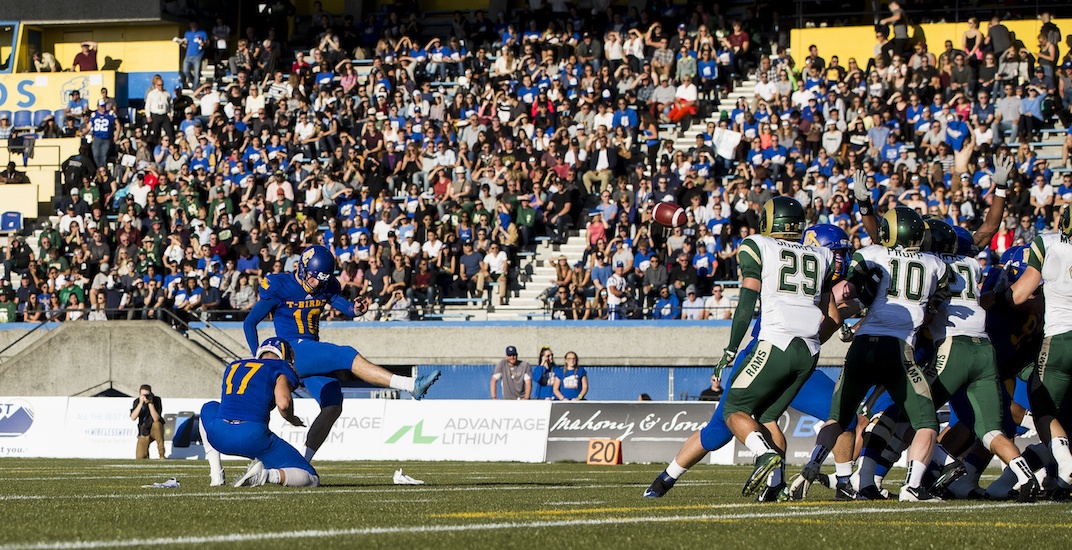 Are you ready for some football?

More importantly, are you ready for a party?

School spirit will be to the maximum on Saturday, as UBC hosts this year’s Homecoming Game at Thunderbird Stadium. Organizers expect 10,000 people to attend, in what is fast becoming one of the best sporting traditions on the Point Grey campus.

“We couldn’t be more excited to roll out the next evolution of Homecoming at UBC,” said Rob Morton, manager of campus experience. “Many people don’t know this but homecoming has actually been going on at UBC for nearly 100 years. Homecoming is a tradition that brings generations of Thunderbirds together to celebrate UBC and this year we are pretty excited to take it to the next level.”

UBC hosts the University of Saskatchewan Huskies at 5 pm at Thunderbird Stadium, but Homecoming is about much more than the game.

The day begins at 2:30 pm with the Great Thunderbird Trek. Beginning at the Robert H. Lee Alumni Centre, this march across campus is led by the Thunderbird Marching Band and student athletes. Fans are encouraged to join in with painted faces, noise makers, and blue and gold school colours.

The rowdy student march has been growing every year. This year will involve over 20 student organizations and another 15+ varsity teams parading around campus.

The march stops at Place Vanier and Totem Park before arriving at the UBC Homecoming street party at 3:30.

The Homecoming street party goes from 3 to 5 pm outside of Thunderbird Stadium. The party will have live music, food trucks, and a beer garden. There’s also going to be inflatable games, free samples from sponsors, a 55-foot ferris wheel, and a mechanical bull!

Homecoming is about so much more than the game on the field, but it’s certainly a special day for UBC players.

“Homecoming is the game all players circle on their calendars before the season begins,” said head coach Blake Nill. “It is the most important day of the year for the football team to make UBC’s entire population proud to be Thunderbirds. The energy from the thousands in the stands motivates the players on the field. It will be an incredible atmosphere and football game.”

UBC Thunderbirds take on the Saskatchewan Huskies in men’s football.