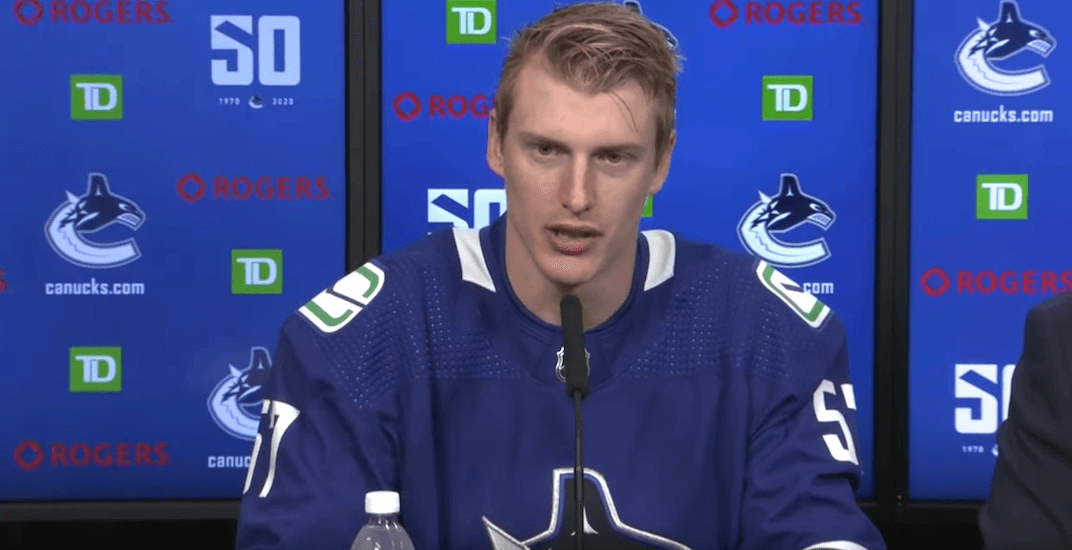 One of the least surprising stories to break on July 1 was that the Vancouver Canucks signed Tyler Myers.

After reportedly being wooed at dinner by Travis Green, Jim Benning, and Francesco Aquilini, Myers signed a five-year, $30 million deal on the opening day of free agency.

Contract aside, the Canucks have added more offensive punch to their blueline.

Over the last five seasons, Alex Edler is the only defenceman to register more than 30 points in a year, which he’s done on three occasions in that timespan. Myers has hit 30 points in each of the last two campaigns. With Edler, Myers, and Quinn Hughes all in the fold, the Canucks might actually get some offence from their blueline this season.

Now in his 11th NHL season, Myers has endured a long journey before arriving to Vancouver.

1. One of the tallest players in NHL history

Listed at 6-foot-8, Myers is the tallest player on record in Canucks history according to NHL.com – taller than notable defencemen Nikita Tryamkin (6-foot-7) and Marek Malik (6-foot-6).

The only current player in the NHL taller than Myers is Zdeno Chara, who stands at 6-foot-9. Chara is also the tallest player in NHL history. Myers is one of six players to play in the league at 6-foot-8. 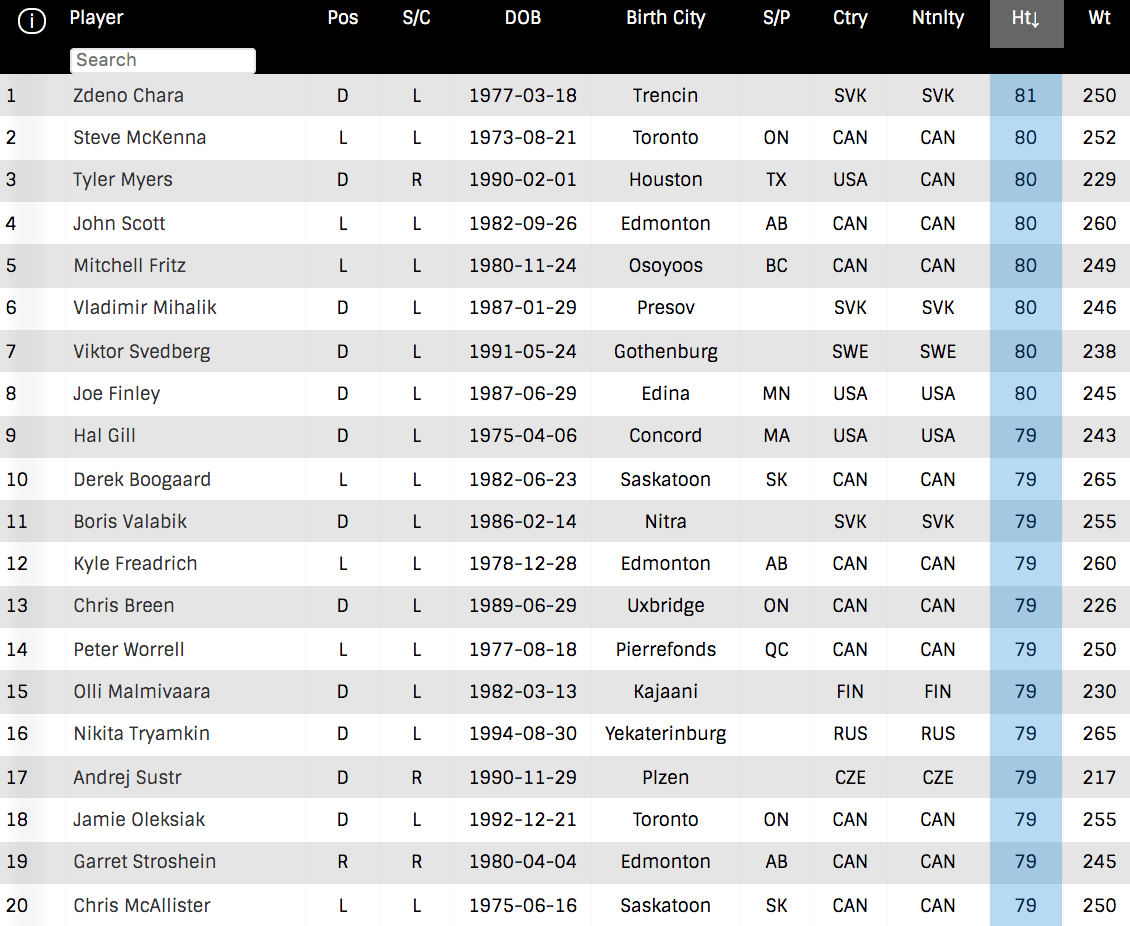 There aren’t too many NHL players to hail from the Lone Star state. In fact, Quant Hockey only lists 10, and two of them are brothers Seth and Caleb Jones.

On that list, Myers ranked second all-time with 265 points. That puts him just ahead of Seth Jones and behind only Hall of Fame defenceman Brian Leetch.

Myers was born in Houston, Texas on February 1st, 1990 to parents to Tonja Stelly and Paul Myers. While not many players end of making the NHL from Texas, there was one life-changing move that sparked Myers hockey career.

Myers’ parents split up when he was just 10 years old, and at that time, his father was hired by an energy company in Calgary. While Myers’ mom remained in Texas, he followed his father up to Calgary.

Paul Myers was a collegiate hockey player, and his passion for the sport was a driving force behind Myers’ decision to play hockey. In Texas, Myers played a plethora of sports including baseball, basketball, and hockey.

After moving to Calgary, it was hockey that took precedent.

4. He chose to represent Canada internationally

Myers holds dual citizenship and decided as a youngster to suit up nationally for Canada.

During his teenage years, that decision worked out well for both Myers and Team Canada. He was part of a gold medal-winning U18 squad in 2008, and later won a gold medal with Canada’s World Junior team in 2009.

The city of New Orleans will always be associated with the nickname “The Big Easy,” but Myers’ former teammates in Buffalo gave him the same moniker as a rookie back in 2009-10.

Even though it wasn’t totally original, Myers approved of the nickname.

6. Tied for 18th all-time for points by a rookie defenceman

Although he’s been unable to match the production from his rookie campaign, Myers’s 48-point effort as a rookie currently stands as tied for the 18th best mark all-time by a defenceman.

On a side note, two rookie Canucks defenceman rank ahead of Myers on the list. They are Dale Tallon (56 points back in 1970-71) and Jocelyn Guevremont (51 points back in 1971-72). Former Los Angeles Kings defenceman Larry Murphy holds the record with 76 points during his rookie season in 1980-81.

7. First Overtime winner against the Canucks

Myers is certainly a defenceman known for his offence, and that was especially evident during the early years of his career, when he posted 85 points during his first two seasons.

During his second year in the league, Myers posted a career-high five game-winning goals. Here’s a look at his third game-winning goal of that season, and his first career overtime game-winner, beating Canucks goalie Cory Schneider.

8. Half-brother is also an accomplished athlete

Myers’s mom Tonja Stelly re-married Marshall Grimes, and gave birth to Quentin Grimes on May 8, 2000. Fast-forward to 2019, and Quentin Grimes is one of the top basketball players in his age group after completing his first year with the University of Kansas in the Big 12.

Even though they’ve never lived close to each other Myers and Grimes refer to themselves as brothers and stay in communication as much as possible.

“I would love for us to be the first NHL and NBA brothers,” Grimes said in a piece from USA Today. “My mom (would be) ecstatic to have two of her sons in two different leagues. We get the genes from her so gotta give her all the credit.”

“It’d be pretty cool for sure if he was in the NBA,” Myers said in the same article. “I’ve already had some thoughts of hopefully we would get caught up in the same city and we could meet up.”

9. Had a health scare with his first-born

Myers and his wife Michela gave birth to their first child in 2017, but they were met with a scare.

Michela went to the hospital and an ultrasound showed that the baby wasn’t moving. An emergency C-section was done shortly afterward, and a myriad of health scares and complications followed in the coming days.

After being born without 80% of his blood, Tristan Myers spent several weeks in hospital, but thankfully he made it out of the woods, and he celebrated his second birthday earlier this year.

Tristan’s health scare came during the middle of the 2016-17 season, one in which Myers only suited up for 11 games after battling through both hip and groin ailments.

After overcoming injuries and the health scares of his first-born, Myers was Winnipeg’s nominee for the Bill Masterton Trophy.