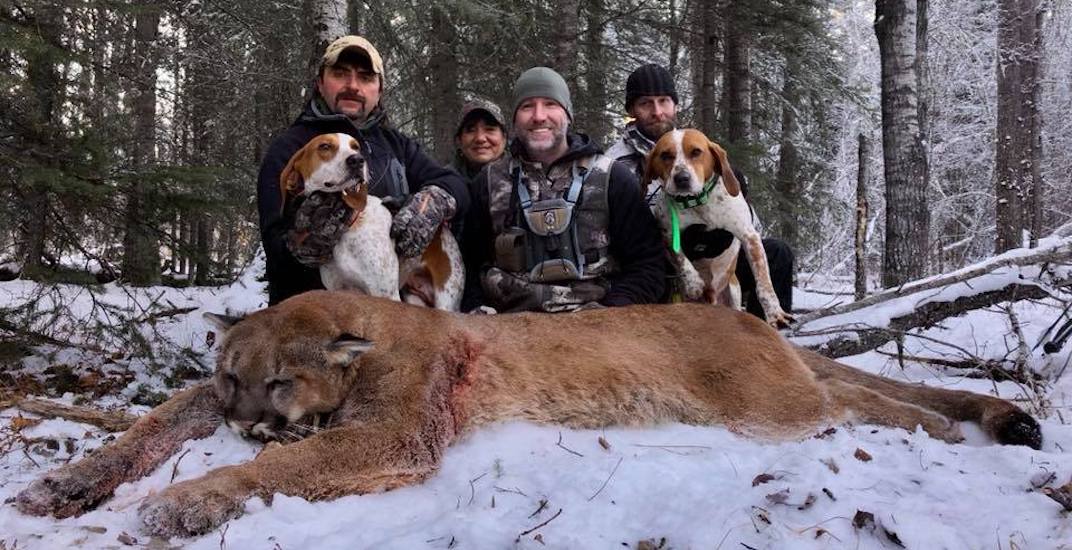 UPDATE: The previous headline for this article suggested that the host was American. Although an ambassador for an American company, Steve Ecklund is in fact from Northern Ontario.

A host of the hunting television show The Edge has been taking some online heat after he posted photos of his Albertan mountain lion hunt to Facebook.

Steve Ecklund, TV host and ambassador for Cabelas, an American hunting, fishing, shooting, and outdoor recreation retailer, made the Facebook post on December 3, causing an avalanche of hate on his public Facebook profile.

“Northern Alberta lion with BIG CAT ADVENTURES Brian and Claudette Chorney … can’t thank you guys enough for the eye opener into your world of houndsmen,” he posted alongside photos of him posing with the dead animal.

Most notable of those responding was Laureen Harper, the wife of former prime minister Stephen Harper.

What a creep. Chasing a cougar with dogs until they are exhausted then shooting a scared, cornered and tired animal. Must be compensating for something, small penis probably.https://t.co/UspnQEdWdL

Someone even asked Harper if her Twitter account had been hacked, but she stood firmly behind what she wrote.

Wasn’t hacked. I was really angry that some guy flies all the way to Alberta to kill a magnificent cougar, so he can make a stir fry. https://t.co/m4skcCGjZ4

The comments on the original post saw a mixed bag of support and disapproval, and Ecklund said in a follow up post the next day that he had received 13 death threats.

“If you can guess what post has 900 likes, 450 comments, 13 confirmed death threats, 754 swear words and one very happy hunter in it … I will enter your name into the draw for the new cougar cook book, filled with mouth water recipes for your next mountain lion hunt,” Ecklund wrote in a December 4 post.

“So incredibly disgusting,” commented one Facebook user. “It’s obvious you have absolutely no respect for life or any creature on this earth. You’re such a pathetic excuse for a human.”

“Go put a bullet in your own head,” wrote another.

Some few people, such as Heather Spoonheim, didn’t really even have a horse in the race, but decided to comment on the debate itself.

“Wow, I’m sorta against hunting, but seeing how violent and angry anti-hunters are sorta makes me anti-anti-hunting,” she wrote.

“I just don’t wanna kill anything or threaten to kill people. So just enjoy your hunting.”

I come from a family that hunts and fishes. Learned to use every part of an animal. Killing for fun makes me sick.

Many defending Ecklund cited the dangers that mountain lions pose as a justification for the hunt.

“If you get past the cute and cuddly in-city representations that have been associated with mountain lions, you’ll see another side to the story to those that live in God’s country,” wrote one commenter.

Another point made was that Ecklund was operating within his legal rights during the hunt, which checks out, according to the 2017 Alberta Guide to Hunting Regulations.

Winter season starts on December 1, so as long as Ecklund made the hunt in the two days prior to making the post, he’s legally in the clear.

Whether or not his hands are morally clean is, evidently, up for debate.