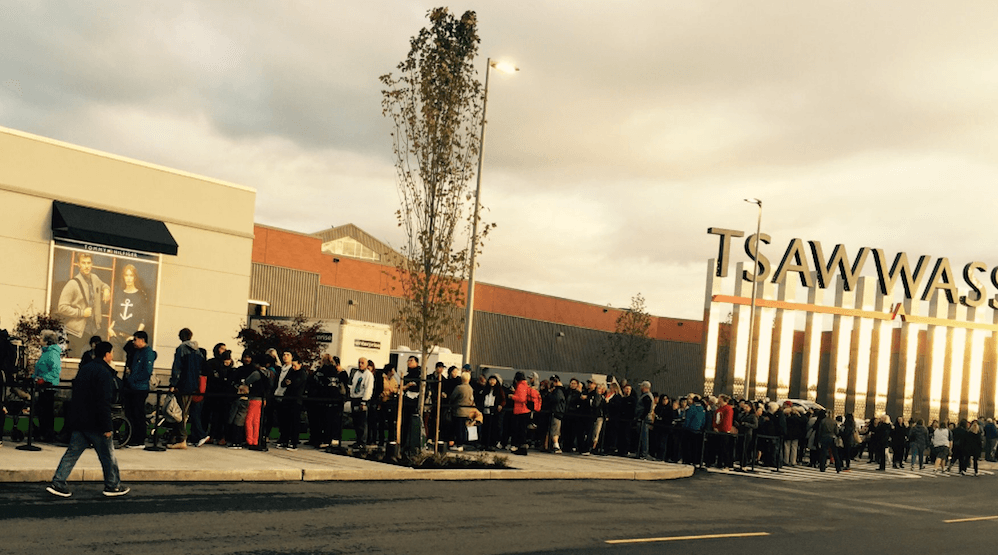 Early this morning, people began lining up to be amongst the first shoppers at the new Tsawwassen Mills shopping centre on Tsawwassen First Nations’ land in Delta.

The 1.2-million-square foot mall opens its doors at 10 am today, and tens of thousands of people are expected to visit the so-called destination shopping centre through the Thanksgiving long weekend.

Tsawwassen Mills is located just east of BC Ferries’ Tsawwassen terminal. To accommodate the expected mall traffic, Highway 17 leading into the mall was widened from four to six lanes and access lanes similar to highway off ramps were built to remove any potential queuing along the arterial route. Improvements were also made to traffic signals earlier this year.

All upgrades to local road infrastructure were paid for by the mall developer. The Ministry of Transportation says there will be extra traffic control personnel on site to help direct visitors.

In the summer of 2015 when McArthurGlen YVR Airport Outlet Centre opened its doors, the main route into the airport at Sea Island was congested with shoppers, to the extent that some air passengers heading to the terminal building experienced delays. The shopping centre saw a company record of 45,000 people on opening day and 160,000 people over the entire opening weekend.

Headed down to @TsawwassenMills to check out the excited crowds!! pic.twitter.com/Bz4sj01rEm