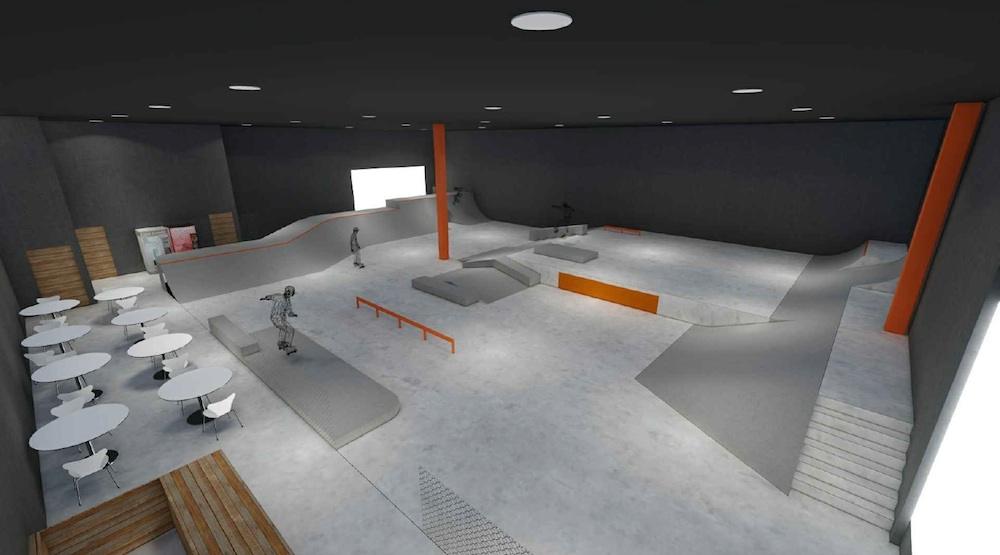 One of the feature attractions at the new Tsawwassen Mills shopping centre will be a large indoor skatepark, about 7,000 square feet in size making it one of the largest facilities of its kind in British Columbia.

On the heels of the International Olympic Committee’s decision to add skateboarding as an Olympic sport at Tokyo 2020, YM Inc., the company that owns action sports lifestyle retailer West 49, says its state-of-the-art indoor skatepark within its West 49 location at the future mall is meant to encourage more local youth to get into the sport.

“Our goal is to reach kids who otherwise wouldn’t take that first step towards skateboarding,” Damion Ceniccola, Operations Manager for YM Inc., told Daily Hive. “A lot of times younger kids are intimidated to go to a skatepark or aren’t given proper instruction on how to learn that next move and that’s where we come in. Providing a safe welcome environment for kids to come learn how to express themselves through skateboarding.”

There will even be a skateboarding lesson programs for local schools in Delta, Ladner, and Tsawwassen as well as a standalone skateboarding school based at the facility.

“The new Skate Academy will teach kids how to safely skate, respect each other, and impress themselves,” he said. “Indoor skate parks in Canada have been few and far between and never had the means to keep their doors open long enough to make an impact.”

“What West49 has, is a vision of not just a place to skate when the weather’s rough, but a place to provide safe lessons from real skaters. A place for rippers to rip and pass on that knowledge to the next generation of skaters. A place to hold annual events and competitions possibly in collaboration with other companies in the industry who want to give back to skateboarding as well.”

The facility is designed and built by locally-based New Line Skateparks, a company that is responsible for over 200 indoor and outdoor skateparks across North America, including the skateparks at UBC, the Vancouver Skate Plaza under the Georgia and Dunsmuir viaducts in downtown Vancouver, Gleneagles Adventure Park near Horseshoe Bay, and the Queensborough All-Wheel Park in New Westminster.

The West 49 store and skatepark will open on October 5, the same day that the rest of the mall will officially open. When fully occupied, there will be space for over 200 premium shops, outlet stores, and restaurants at the 1.2-million-square-foot indoor shopping mall; to date, approximately 160 retailers and restaurants – such as Adidas Outlet Store, Bass Pro Shops, Guess Factory Store, Sport Chek, Victoria’s Secret, Michael Kors, Marshalls, HMV, Ever New Melbourne, Calvin Klein, and Levi’s – have announced their presence at the mall.