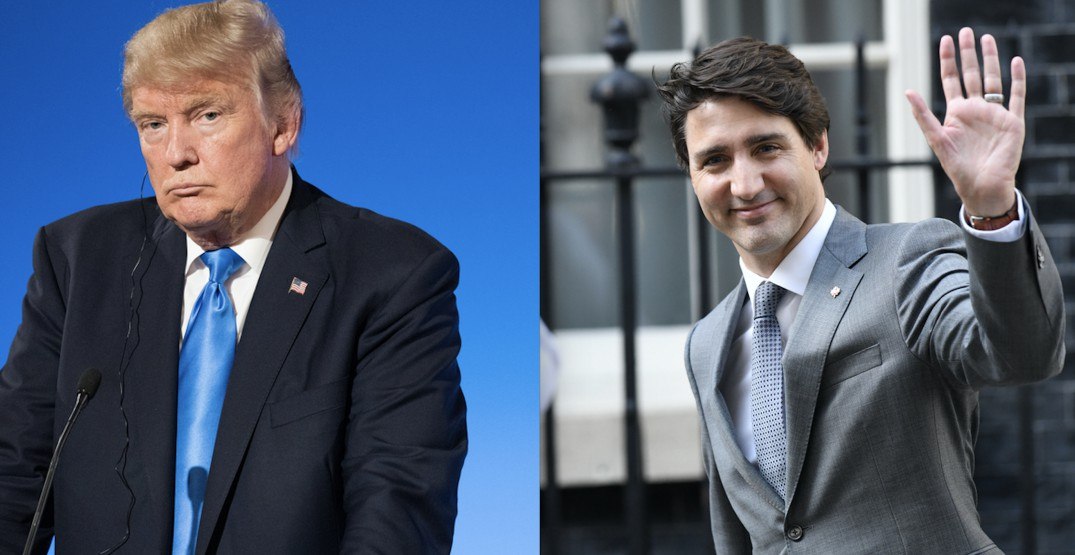 Our neighbours down south are using Twitter in a positive way (contrary to their President) to let Canadians know they are appreciated with the hashtag #ThanksCanada.

Following Trump’s visit to Canada for the G7 Summit, the President took to Twitter to call Trudeau “very dishonest and weak” in regards to the current trade and tariffs battle between the US and Canada.

And Trump didn’t stop there as his rant continued on Sunday.

Trump’s comments about our PM seem to have backfired as high-level politicians around the world are standing up for Trudeau.

And now it looks like Americans are siding with Canada too. American music writer David Wild began the #ThankCanada/ #ThanksCanada social media movement with this tweet:

And the love is spreading. Americans are thanking Canada for our healthcare system, maple syrup, Drake, Neil Young, The Tragically Hip, hockey, and of course, our kindness. Check out some of the tweets below:

Canada – we think you’re great. You gave us Neil Young, Keanu Reeves, and peanut butter for crying out loud. Sorry about our President. He doesn’t speak for all of us. Thanks for being the best kind of neighbor. #ThankCanada

#ThankCanada for providing my father in law with free cancer treatment for three years. His healthcare costs would’ve been in the millions in the US and would’ve bankrupted us all. Also, for my ER visit a couple of years ago, where I got the best medical attention ever.

#ThanksCanada for welcoming 50,000 Americans who wished to avoid the Vietnam draft and for being a true beacon of freedom for refugees from across the globe. Thanks for Neil Young, Leonard Cohen, BTO, hockey, James Naismith and the inspiration of Tommy Douglas. #ThankCanada

I’d like to #ThankCanada for my grandfather who grew up speaking French in a small village in BC, fought with the allies in WWII in the Canadian Navy, before moving to San Diego to start his family. https://t.co/DVU0vpi3Fn

I just wanted to #ThankCanada for allowing me in for four years to get an amazing university education (at half the price of what a US uni would have cost). Oh, and I majored in PoliSci.

My wife and I visited Toronto in 2005 before gay marriage was legal in everywhere in the US. We had a lovely time, and I will never forget your friendly, stylish city. #ThankCanada

#ThankCanada for Hockey, Peanut Butter, Insulin, Lacrosse, and being kind!

I would like to #ThankCanada for @WayneGretzky and @labatt beer. And for having the nicest people in the world as its citizenry.

Coming home from Afghanistan our plane stopped in a small airport in Canada where the entire herd of service members were greeted with applause and thanks from our brothers and sisters up north. That memory still touches my heart whenever I think of it. #ThankCanada

#ThanksCanada For hockey. And poutine. And Sidney Crosby. And ketchup chips. And for being awesome. (Seriously, you guys are way cooler than us) 🇨🇦❤

Remember..
“On 9/11, thousands of Americans on 238 airliners were diverted to Canada as part of Operation Yellow Ribbon. Canada cared for them for days, The small town of Gander took in 7,000 people alone. In our hour of need, #Canada was there.” — Source: @NerdPyle #ThanksCanada

I met @JustinTrudeau in February. I said #ThanksCanada for being California’s 2nd largest trading partner, directly supporting over 1.1 million CA jobs. He was gracious and well spoken. I wish a Canadian legislator was able to say the same after meeting our head of state. pic.twitter.com/GRk6AQdP0Q

My travels as an artist take me into Canada several times a year. I LOVE Canada and the Canadian people. The Canadian government actively supports the arts. They do this WAY better than the US gov’t, and I am forever grateful. #ThanksCanada https://t.co/e5A2GZbq7R

#ThanksCanada for the Tragically Hip and selling Aero Bars. Please ignore the Mango Mussolini. We still want to be friends.

#thankscanada I have always admired the love and support our neighbors have given the US. Even when I was a little girl on a visit to Montreal, I had great love for the resilience of the Canadians. Bless you and Trudeau. We will get through this together.