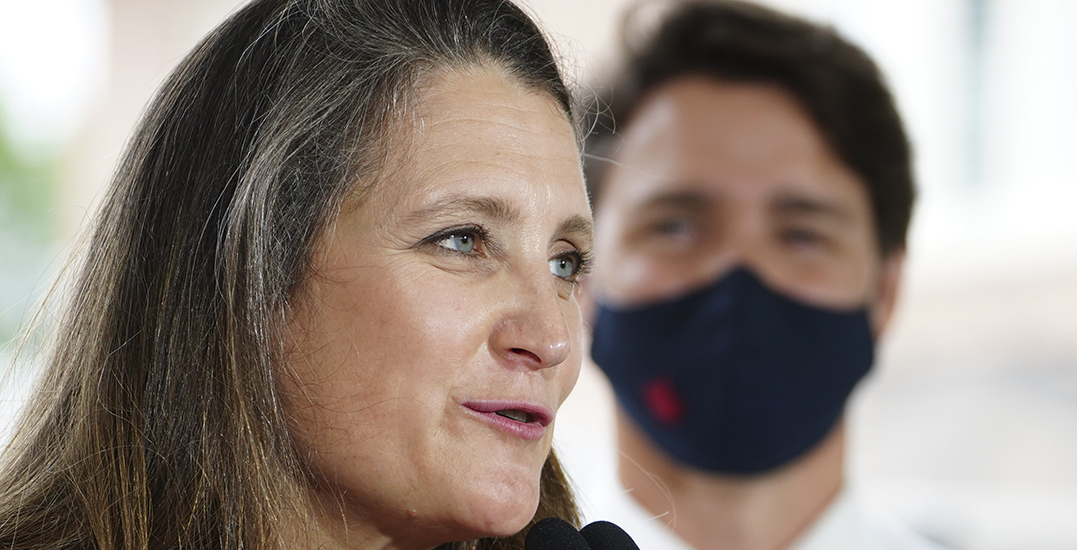 Liberal Leader Justin Trudeau was put on the defensive Monday after a tweet from his deputy prime minister attempting to paint his Conservative rival as an advocate for private health care was labelled as “manipulated media.”

Twitter flagged the tweet from Chrystia Freeland, who is seeking re-election in the Toronto riding of University-Rosedale, after she posted spliced-together clips of Conservative Leader O’Toole answering a question about private, for-profit options in universal health coverage.

O’Toole said in the interview that he wanted to find public-private synergies.

The Tories sent a legal letter to Elections Canada, asking it to investigate the tweet as a violation of the Canada Elections Act. The party’s lawyer, Arthur Hamilton, argued in the letter that the Liberals “intentionally altered and edited content from the original video” in such a way that it “materially misrepresents” the Conservative position.

When asked Monday about the warning, Trudeau noted that the Liberals also posted the video of the entire interview, doubled down on the Liberal attack line and encouraged Canadians to watch the recording in its entirety.

He said a lesson from the pandemic is that “it is absolutely essential that everyone has access to health care” and that the country’s universal, public system was the best means to do that.

“We know that we need to invest more money in health care, we need to work with the provinces to improve data-sharing and outcomes for Canadians across the country,” Trudeau said in a largely empty room at Dalhousie University in Halifax.

“Those are the conversations we’re going to have. This announcement today doubles down on the Liberal party’s commitment to public, universal health care at the same time as we’ve seen Erin O’Toole double down on his belief in a two-tiered, private, for-profit system.”

Trudeau’s announcement on Monday was a promise to spend billions in the coming years to hire family doctors, regurgitating almost the exact promise the Liberal leader made in 2019 that went unfulfilled.

The Canadian Medical Association estimates about five million Canadians don’t have a primary care physician, or family healthcare team, which has spillover effects into other parts of the healthcare system.

Among those trickle-down effects are people going to emergency departments, already stretched by the COVID-19 pandemic, for issues a family doctor could manage.

Trudeau said the Liberals would spend $3 billion over four years starting in 2022 to hire 7,500 family doctors, as well as tax and student loan incentives for health professionals who set up shop in rural or remote communities.

That’s less than the $6 billion over the same time frame that Trudeau promised on the 2019 campaign trail.

He is also pledging an extra $6 billion to wrestle with waitlists.

Trudeau said his government had been working on the doctor commitment made in 2019 while it focused on the federal pandemic response, but also noted that much of the work relies on cooperation with provinces.

The Liberal leader has harped on health care and vaccinations at the start of the second week of the campaign, which sees him hitting Liberal-held ridings in Atlantic Canada.

Trudeau spoke Sunday to crowds in New Brunswick and PEI about the need to get a shot, and his government’s pledge to require public workers, as well as air and rail travellers, to be fully vaccinated, looking to use it as a wedge issue against the Conservatives.

Trudeau’s minister in charge of getting vaccines for the country is suggesting that companies should consider following suit if they haven’t done so already.

Anita Anand also said Sunday night in PEI that while individuals have a right to make decisions about their personal health and safety, there is also the need to protect the collective health and safety of Canadians.