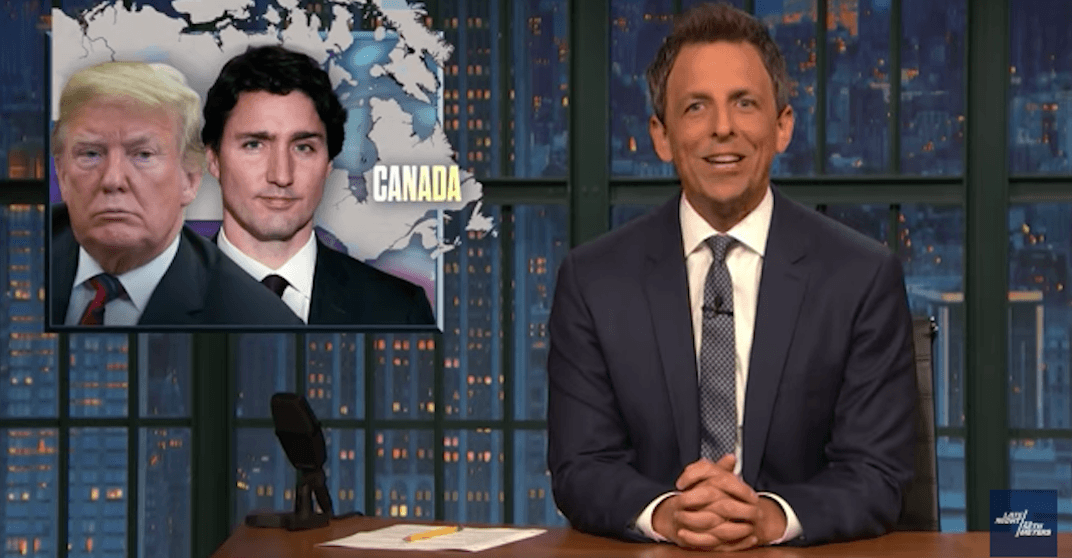 The President, who left the G7 Summit early to go to Singapore for his meeting with Kim Jong Un, called Trudeau “very dishonest and weak.”

Not only did prominent political leaders have something to say about Trump’s behaviour, critically acclaimed actor Robert De Niro gave his two cents at a recent groundbreaking ceremony in Toronto, where he apologized for his president’s “idiotic behaviour” calling it a “disgrace” and “disgusting.”

And of course, late night talk show hosts were quick to jump on the Trump roasting wagon.

During Monday night’s episode of Late Night With Seth Meyers, the talk show host told his audience that when Trump arrived in Singapore for his summit with Kim Jong-Un, he was “throwing a tantrum” over a summit he had just left with leaders of the G7.

According to Meyers, when Trump took off for Singapore, he said he would “confront his enemies,” and that the President is doing just that by pushing back against one of America’s fiercest foes… Canada.

“How do you get into a fight with Canada? That’s like holding a grudge against a golden retriever puppy,” said Meyers, which was received with a loud applause and cheers.

Meyers went on to highlight Trudeau’s comments to reporters at the G7 Summit when he said Canada “will not be pushed around” in response to the Trump administration’s newly announced tariffs on steel and aluminum.

In response, Meyers said, “wow. Just so you know, in Canada that counts as a diss-track. You mess with Canada and we’ll regrettably inform you that we do not care for that sort of behaviour. Please and also thank you.”

But the jabs didn’t stop there. Connan O’Brien also spent a portion of his show poking fun at Trump’s behaviour following the G7 Summit when things became very “tense” with Trudeau.

O’Brien said while many people are unhappy about this, his show’s only Canadian writer Levi MacDougall is taking it “particularly hard” and he wanted to give Trump a statement on behalf of all Canadians.

Without giving too much of the sketch away, MacDougall begins to call out Trump in a very polite, Canadian-esque manner, saying he insulted the integrity of Trudeau and that Canadians don’t take kindly to that kind of disrespect.

“So Mr.Trump, please listen to what I’m about to say,” said MacDougall before taking a very awkward pause, “hey, don’t.”

Because what Canadian in their right mind would actually call out the US President?

If you want to find out what happened next, check it out below: