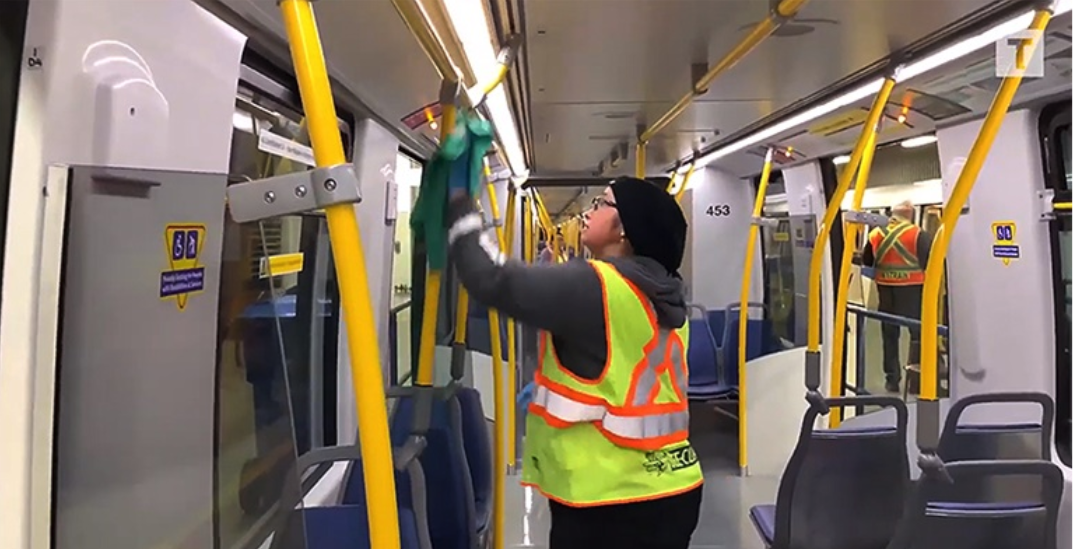 Deep cleaning of a SkyTrain car in Vancouver. (TransLink)

Prime Minister Justin Trudeau has indicated that the federal government is looking to provincial and municipal governments to bail out their public transit services during COVID-19.

With public transit systems across Canada facing historic fiscal issues largely due to the drop in ridership demand, there have been calls for the federal government to establish a national transit strategy that provides federal emergency operating funding.

But Trudeau has suggested that while the federal government has greatly increased its capital funding supporting new and improved public transit infrastructure, it is not in a position to subsidize the operating cost of public transit.

“This government has made historic investments in transit over the past years. We recognize that public transit is an essential part of growing the economy, of helping our cities, and mostly helping people to be able to get to work from home in a reliable way. That’s why I believe so deeply in transit,” said the prime minister during Friday morning’s press conference.

“Operation of transit is more of a municipal and provincial responsibility, and we hope to see provinces stepping up on supporting this essential element of the economic relaunch. People are going to need to be able to get to and from work as we want to get the economy going again, but the federal government is always looking to be a partner in helping out in terms of economic relaunch wherever we can.”

In their advocacy, both the Federation of Canadian Municipalities and the Canadian Urban Transit Association are asking for $400 million per month in federal funding to compensate for lost transit revenue across the country.

The country’s largest public transit systems — Vancouver’s TransLink, Calgary Transit, Toronto Transit Commission (TTC), and Montreal’s STM — have all reported that recent ridership levels are down by over 80% compared to the pre-pandemic period.

There have been concerns over how curtailed public transit service levels — lower frequencies and physical distancing capacity limits — will impact those who rely on public transit, specifically essential service workers at hospitals and grocery stores, seniors, young people including students, and low-income individuals, as well as other people without car access.

And with provincial governments across the country rolling out plans to reopen the economy, more people are expected to return to public transit over the coming weeks and months, but they could be finding themselves facing unreliable service.

On Friday, BC’s provincial government announced it is taking measures to assist TransLink with its financial issues, both in the short-term and long-term. The latest round of service reductions, the steepest since the start of the pandemic, planned for May 18 and the layoff of 1,500 employees has been cancelled, which coincides with the provincial government’s timeline of gradually reopening the economy.

But over the course of the past few weeks, there have been discussions that the federal government is considering accelerating the spending of over $180 billion in previously budgeted infrastructure funding towards shovel-ready projects to help stimulate the economy. Public transit projects across the country could be amongst the primary benefactors.