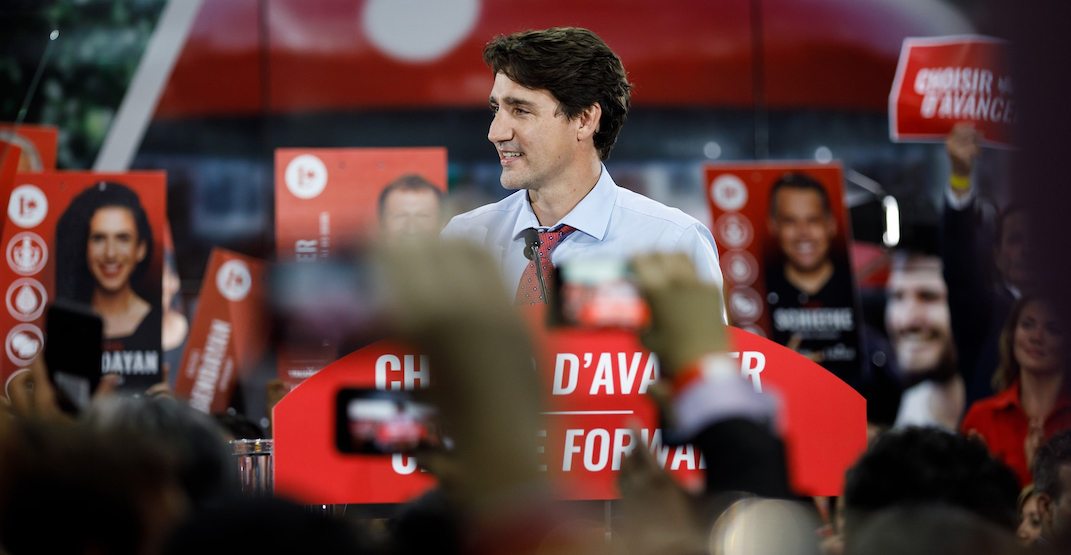 Hours after holding a rally with throngs of cheering Liberal staff and supporters in downtown Ottawa, Trudeau touched down in BC for the start of what is expected to be a gruelling cross-country push to voting day on Oct. 21.

The Liberals face a tough fight in Canada’s westernmost province, particularly in Vancouver and the Lower Mainland, where many voters are angry and frustrated with the Trudeau government’s decision to purchase the Trans Mountain oil pipeline.

The federal government bought the existing pipeline and the unfinished expansion work for $4.5 billion last year, promising to get it past the political opposition that had scared Kinder Morgan Canada off proceeding.

While the Liberals say they are committed to balancing environmental protection and Canada’s economic needs and will re-invest profits from the expansion into fighting climate change, the purchase has been widely criticized by environmentalists as well as the federal NDP and Greens.

Liberal insiders have acknowledged that voter intentions are volatile in the province, which has been governed at the provincial level by a New Democrat-Green partnership for more than two years.

Opinion polls suggest the federal NDP in particular has picked up some momentum in the province, which could result in New Democrat candidates winning some seats and splitting left-of-centre votes in others, which would benefit the Conservatives.

And with the Liberals and Tories still running neck and neck in national polls after more a month of campaigning, every seat is likely to matter in deciding the make-up of Canada’s next federal government.

Shortly after flying into Vancouver, Trudeau drove to a Simon Fraser University campus in the nearby suburb of Surrey, where he touted his plan to increase grants for post-secondary education and make it easier for students to repay their loans.

He also faced questions about pipelines, saying on the one hand that his government opted not to support the Energy East project  — running from Alberta to New Brunswick — because “there is no public acceptability, no social acceptability for a pipeline in Quebec”
even as he defended the Alberta-to-B.C. Trans Mountain project.

“We worked with the government of the time to move forward with the Trans Mountain pipeline expansion,” Trudeau said, referring to former Liberal premier Christy Clark’s government, which was replaced by the NDP-Green alliance led by Premier John Horgan in
July 2017.

The Horgan government has expressed concerns about the project and sought to challenge it in court without success.

Asked about the current government’s opposition, Trudeau said only that he had had “many excellent conversations” with Horgan about climate change and improving the economy.

Trudeau was scheduled to hold a rally with Liberal supporters later in the day in the riding of Burnaby South, which Singh has represented since first being elected into the House of Commons in March. It is the Liberal leader’s second visit to the riding during
the election campaign.

Burnaby is to be the terminus for the expanded Trans Mountain oil pipeline, which will result in more tanker traffic off the coast. The project has not sat well with local residents and politicians. Even the city government tried to challenge the project in the courts, but its challenge was rejected.

When asked what message he was trying to send to Singh and the NDP with the visit, Trudeau instead warned about the billions in dollars the Conservatives have said they would cut in federal spending to fulfil their campaign promises and balance the budget in the next five years.

The Liberals have been warning progressive voters against voting for the NDP or Greens and to instead cast their ballots for the Liberals to prevent the Conservatives from forming government.