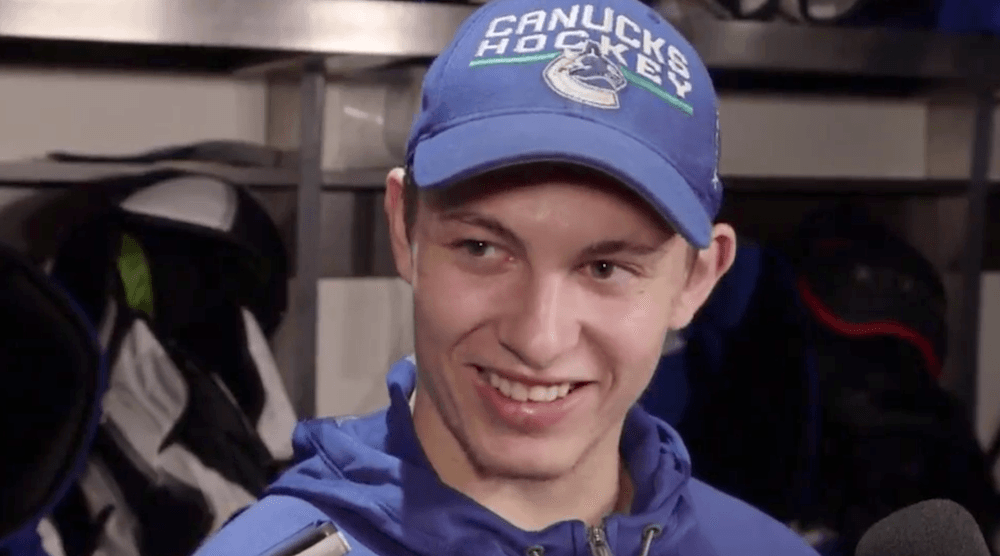 Before the season began, not many people had Troy Stecher making the Canucks in 2016-17. The 22-year-old was destined for Utica to hone his skills in the AHL for his first pro season.

Instead, Stecher was a surprise standout in preseason and had many campaigning for him to get a spot on the opening night roster.

Instead, Stecher began the season with the Comets, likely due to waiver restrictions for some of his teammates. He earned a recall because of an injury to Chris Tanev, and was sent back down to Utica once the team had eight healthy defencemen at the start of their eastern road trip. He was recalled not long after and now, certainly, he’s here to stay. I mean he has to be, right?

Stecher has been one of Vancouver’s top-five defencemen this season, which is an incredible rise for the Richmond native.

Signed as a free agent by the Canucks out of the University of North Dakota in April, Stecher has been a real find for the organization. The undersized d-man was coveted last spring, but certainly didn’t have the aura surrounding him like North Dakota teammate Drake Caggiula, who signed in Edmonton.

Perhaps this will make fans breathe easier about losing defenceman Gustav Forsling, who scored his first NHL goal with the Chicago Blackhawks the same day.

It would be far too early to proclaim Stecher a future star, but it’s clear that he’s a lot better than most thought.

He scored his first NHL goal on Sunday in spectacular fashion. With the goalie pulled for an extra attacker, Stecher made a play at the blue line that no other player on the Canucks’ roster would have made.

“A bouncing puck, and I just wanted to keep it in,” Stecher said following the game. “Obviously I knew time was coming down, I chipped the puck off the wall, off the ice, so Benn couldn’t skate onto it. I was fortunate to skate onto it myself and put a shot through a screen.

“When you put pucks to the net, good things happen.”

The goal will get the attention (as it should), but there are so many more things to like about Stecher’s game right now.

Stecher’s offensive instincts and willingness to shoot the puck are sorely lacking among Vancouver’s blueliners.

He played 21:43 against Dallas, which was second only to Alex Edler, while his four shots on goal tied for most on the team. Stecher also joined the rush and would have assisted on Alex Burrows’ goal, had it not been disallowed.

Now, it hasn’t been all positive for Stecher. He was caught up ice on Lauri Korpikoski’s 2-on-1 goal and was looking the wrong way on Patrick Eaves’ second goal of the night on a 2-on-2.

But a great measure of Stecher’s effectiveness can be seen in advanced stats, where he has proven to be very good at helping his team possession-wise. Stecher had the second-best 5-on-5 even strength Corsi rating on Sunday at +11.

Stecher has been the most effective defenceman by the Corsi percentage metric through seven NHL games. That’s even more impressive when you consider that he has done it primarily on the team’s top defence pairing, playing against the other team’s best players.

Another measure of Stecher’s effectiveness is his ice time. Head coach Willie Desjardins loves him, playing him 20:05 per night, which ranks him fourth among all Canucks defencemen. That’s a strong indication that he’s doing the right things on the ice.

What will be interesting to see is what the Canucks do when all of their defencemen once healthy again. Stecher has effectively stolen Philip Larsen’s job, and has more upside to boot. It’s too much to expect Stecher to continue to thrive on a top pairing, so Edler and Tanev should be reunited.

But there needs to be a spot for Stecher in the lineup if this keeps up.

Perhaps Stecher can find a home with Luca Sbisa or Nikita Tryamkin on a third pairing, or maybe even with Ben Hutton to give the Canucks a dynamic puck-moving look from the back-end.

Wherever they decide to play him, it’s clear that it needs to be here in Vancouver, and not in Utica going forward.

.@TroyStecher scores his first NHL goal, but is all business post-game pic.twitter.com/2cxagxpFTp