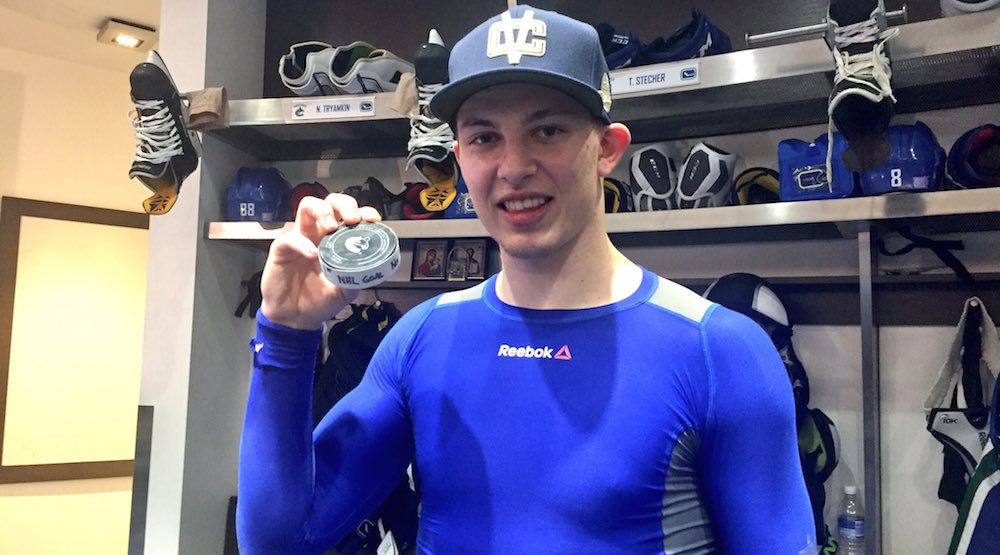 After a road trip in which they won just one of six games, the Vancouver Canucks took on the Dallas Stars for the first of four straight at Rogers Arena.

In a game where the Canucks once again failed to lead for a single second, they still managed to come away with a 5-4 win in overtime.

With rumours swirling about potential change in Vancouver, it was a job-saving kind of performance for Willie Desjardins’ Canucks, overcoming a two-goal deficit and a disallowed goal to complete the comeback.

The Canucks actually got great depth scoring tonight, with four players not named Sedin picking up multi-point nights. When was the last time that happened?

The Canucks haven’t been the type to play high scoring games this season, but as Clay pointed out in today’s game preview, Dallas’ combination of poor goaltending and dynamic offensive players meant it wasn’t surprising when goals started going in.

Like any Canucks game this season, it started with the opposition finding the back of the net first. A mad scramble of poor defensive play led to an easy goal for Patrick Eaves and the Stars got on the board first.

Yes, that is Dan Hamhuis putting the puck on net, assisting on the goal. Moving on…

Only 22 seconds later, the Canucks tied the game on a nice goal from Bo Horvat. He made a quick cut move on Hamhuis before snapping the puck past Kari Lehtonen for his fifth of the season. That puts him tied with both Sedin twins for the team lead in goals.

Not to be outdone, the Stars came back and scored the very next shift, just 20 seconds after the Horvat goal.

It was three goals in just 42 seconds, which is more action than we’ve seen in more than a few full games this season. Unfortunately, and expectedly, it was the Canucks on the losing side of things after 20 minutes.

I’m not going to go through the whole story of how the Canucks lost Hamhuis, because it still angers me to think about that entire situation and how it was handled. I’d like to see Hamhuis still in a Canuck jersey, but if the Canucks have taught me anything, it’s that you can’t always get what you want.

In fact, you can very rarely get what you want.

Anyways, after not being traded, Hamhuis signed in Dallas and is now a fixture in their top-four.

Tonight was his first game back at Rogers Arena, and he was treated with a video message and a warm welcome from the fans. Well deserved for a guy who was always classy throughout his years as a Canuck.

After a fairly quiet second period, the Canucks found themselves down 3-1 heading into the final period.

At this point, some viewers, myself included, expected the Canucks to put up a rather stale final 20 minutes.

That was not the case.

Perhaps Desjardins made a job-saving speech in the locker room before they hit the ice. We may never know, but the Canucks came out determined in the third.

It started with Loui Eriksson’s second tally of the season, sneaking a shot five-hole on Lehtonen.

Less than three minutes later it was another Canuck getting his second goal of the season. Brandon Sutter finally has something to show for all his time on the first power play unit, taking a pass from Daniel Sedin and snapping it past the Stars netminder.

That tied the game 3-3, but of course a Canucks comeback wouldn’t come that easily. The Stars got another goal from Antoine Roussel. Seguin was credited with the assist, but the real assist goes to Nikita Tryamkin’s skate.

Tryamkin’s play has been mostly positive through his first few games this season, but this was not his finest moment.

No Canucks game would be complete without something to create controversy, and in this one it was Alex Burrows scoring, only to have it taken away by a Dallas challenge on goalie interference.

The challenge revealed that it was interference, so the goal was taken back and the Canucks still trailed 4-3 late in the game.

At this point, you’re thinking that’s it. It’s over, that was their chance at the comeback.

5. Stecher gets his first

Despite having their tying goal taken away once already, the Canucks were determined not to let that define the game. They kept pressing for an equalizer and eventually it was the rookie Troy Stecher scoring his first NHL goal to tie the game.

It was a great move at the line by Stecher to get space around Jamie Benn before firing a low shot through traffic that beat Lehtonen. He finishes it all off with the classic jump into the glass celly.

What a moment in his very young career.

The Canucks struggled to adapt to 3-on-3 overtime last season, costing them a lot of wins early in the season. This year it’s been the opposite, as they came into this one already 2-0 in the extra period.

It only took 90 seconds of overtime before Markus Granlund collected a puck off a scramble draw and wired it over the glove of Lehtonen. Canucks win!

Don’t look now, but that’s Granlund’s fourth goal of the season, which puts him behind only Horvat and the twins on the Canucks.

Meanwhile, Hunter Shinkaruk has no points in three games this season with a -4 rating. That trade isn’t looking half-bad right now for Benning.

This is now the fourth game the Canucks have won without having spent any time with the lead. That’s definitely not something to be proud of, but it is kind of neat.

The Canucks have now won two of their last three, as they now prepare for a rematch against the New York Rangers on Tuesday.