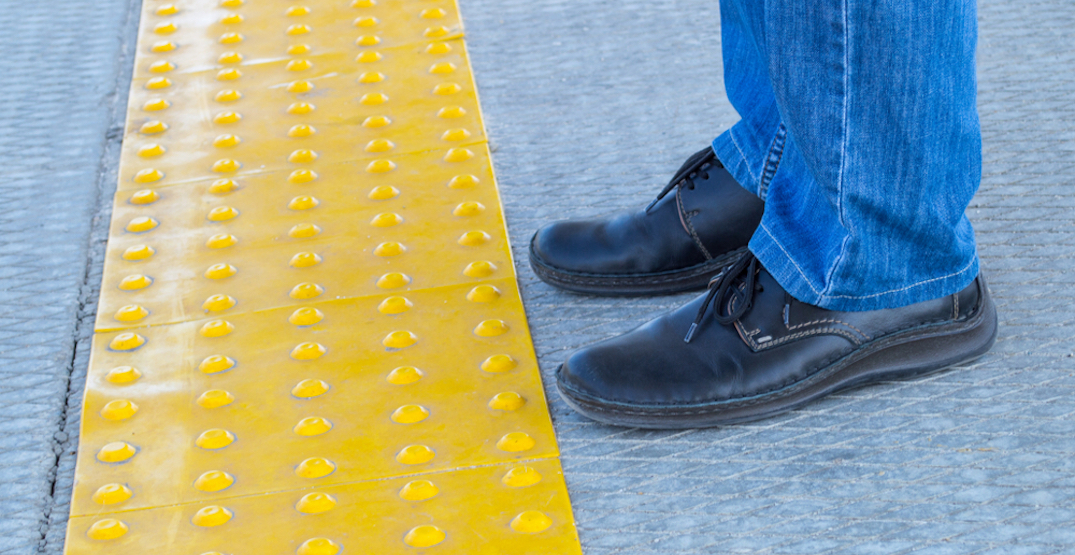 Example of tactile paving on a sidewalk for people with vision loss. (Shutterstock)

Updated on December 6, 2019: TransLink’s board of directors has officially approved these new accessibility measures.

The public transit authority’s board of directors is expected to approve a staff recommendation next week to provide $7 million in funding from the 2020 budget’s capital plan to deliver the new accessibility features. The installation work will be completed over a three-year timeframe beginning early next year.

TWSI already exists on the edges of SkyTrain platforms. Similar TWSI pavers will be installed at all bus stops, bus bays, and bus unloading stations on properties TransLink owns, leases or licenses, as permitted.

For TWSI at bus stops on municipal sidewalk property, TransLink will seek permission from the relevant municipal authorities, but the City of Vancouver and City of Burnaby have already indicated they do not support TWSI for their bus stops, which was separately proposed for the bus stops of the various new RapidBus lines.

The textured ground surface from TWSI pavers are detectable underfoot when walking or by cane. They can be used to alert passengers with vision loss of roadway curb hazards and the area where the front door of the bus will open.

Another component of this accessibility program is the installation of supplemental braille and tactile signage onto all 8,500 bus stop posts in Metro Vancouver. These additional signs at body level will include details such as “STOP” or “BAY #” identifier, stop ID number, bus route number, and the customer service telephone number.

“Many people with vision loss rely on taking the bus and they want to be able to independently locate a bus stop and know it’s the correct bus stop,” reads a report by TransLink staff.

The public transit authority’s survey of the vision loss community found that the two most difficult parts of a bus trip are identifying that they are at a bus stop and knowing that it is the correct stop. For 67% of respondents, the most common way to overcome both difficulties was to ask a bus driver or a Good Samaritan.

“The accessibility of information at bus stops for customers who are blind or partially sighted has been a longstanding concern for stakeholders in the vision loss community. There is presently no accessibility legislation at the Provincial or Federal level to guide a solution for information at bus stops for customers with vision loss,” the report continues.

Over the years, the installation of TWSI and braille and tactile signage at bus stops has been generally limited to pilot projects, when other upgrades to facilities are being undertaken, and when municipal governments are willing to share the cost of TWSI at stops on their sidewalks.

To create this widespread accessibility plan benefiting people with vision loss, staff analyzed the methods of other public transit systems across North America and elsewhere in the world, but there is no precedent of a standardized systemwide installation of these aids.

“Very few peer agencies provide tactile and braille information. To inform development of the implementation plan, we researched practices for braille and tactile information at bus stops nationally and internationally,” adds the report.

Additionally, TransLink will engage in a wayfinding technology pilot program that examines how new technologies can be used to provide wayfinding information for passengers with vision loss. Interacting with a smartphone or tablet device, examples that could be explored include physical Bluetooth beacons or virtual beacons that rely on a cloud-based storage system and GPS.