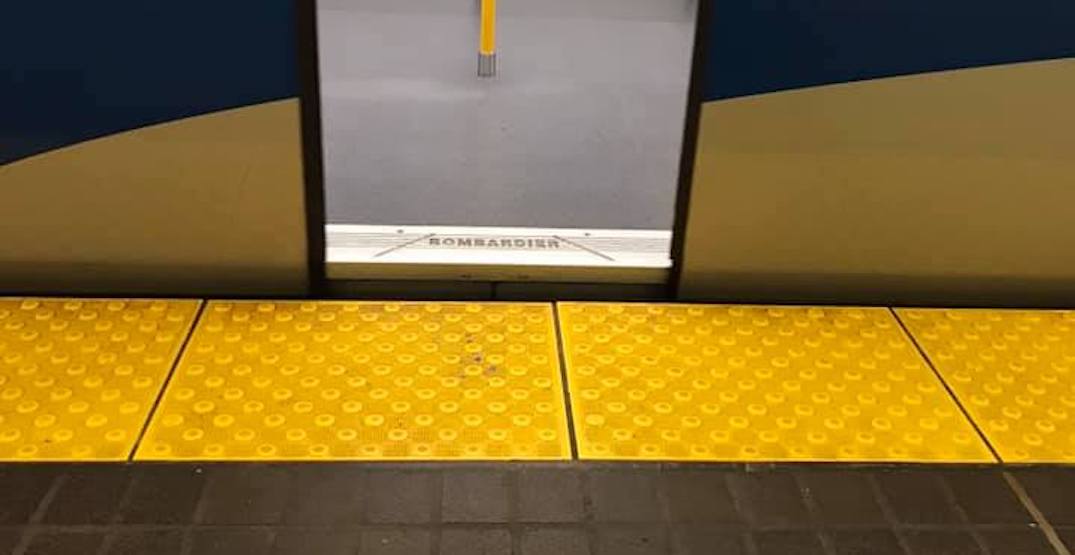 A new Mark III train that is "not level" with the platform of the Expo Line's Waterfront Station. (Janice Laurence)

A photo post circling Facebook over the past week, detailing an incident where a person using an electric-powered wheelchair had an issue with boarding a SkyTrain car, caused some consternation over social media on the accessibility of the train system for people with disabilities.

Janice Laurence wrote she was unable to board a new Mark III train at Waterfront Station on the Expo Line, claiming the train floor was not level with the platform.

“I tried twice forward and twice backward. It was a painful jolt each time and scary to see the gap,” she wrote.

“The floor of the train was higher than the platform and the uneven height and gap were too much for my wheels. I’m grateful that the doors remained open and my wheels were not caught between the SkyTrain and the platform.”

Unable to board, she was successful in boarding the next arriving train.

Laurence claims she was warned by another person using an electric-powered wheelchair that “the new trains are no longer level with the platform.” She also says the incident was immediately reported to SkyTrain staff, who she says told her that she was the second person to complain on the same day.

The public transit authority says it looked into the matter but contests the assertion that such incidents occur frequently, explaining that there is no inherent design issue with the new trains built by Bombardier.

“This is not a frequently reported problem for our wheelchair customers. We thank the customer for bringing this to our attention and have had our engineers inspect the train to ensure it is up to our safety standards,” TransLink spokesperson Lida Paslar told Daily Hive in an email.

“In some instances, the train floor may sit slightly lower when a high number of customers are on board, or in other cases gradual wheel-wearing may cause some lowering to occur over time. It is a part of our daily maintenance practice to ensure trains are levelled with the platforms and are safe for onboarding at all times.”

TransLink’s public transit system has been fully accessible for roughly a decade, ever since it replaced its aging high-floor buses without lifts with low-floor bus models with ramps and partnered with the developer of The Hudson building to provide Granville Station with a new secondary entrance that includes an elevator, which opened in 2006.

Some remaining high-floor buses used on suburban routes have lifts and are set for replacement over the coming years. TransLink began transitioning its fleet into low-floor buses in 1996.

New and improved accessibility features have been easier to introduce on SkyTrain given its relatively young age, especially when compared to older systems like the New York Subway and London Underground, which has gaps of as much as a foot between the platform and the train at some of its oldest stations.

“TransLink is committed to ensuring that our transit system is accessible to people with different types of mobility, enabling our customers to travel by bus, SkyTrain, SeaBus, and West Coast Express,” Paslar continued.

“Our work is guided by the feedback and needs of our customers and we continue to look at every aspect of the transit system so we can break down barriers as we find them. In addition, we’ve established committees including the Access Transit Users’ Advisory Committee and the HandyDART Advisory Committee, where members provide ongoing advice on TransLink plans, programs, and initiatives, making sure that accessibility issues are always considered.”