Metro Vancouver’s mayors decided this morning to take the next big step with pushing SkyTrain further east in the region, but at the moment it will be roughly half of what was originally proposed due to limited funding.

TransLink’s Mayors’ Council has approved the Expo Line’s continuous extension along Fraser Highway from King George Station to 166 Street in Fleetwood, providing seven km of new track and four new stations. The project will cost $1.63 billion, and it will be entirely funded by the allocated funding that was previously dedicated to the now-cancelled Surrey Newton-Guildford (SNG) light rail transit (LRT) project.

There is currently insufficient funding to build all 16 km of the envisioned SkyTrain extension to Langley Centre, which would cost $3.12 billion. However, this outcome was largely expected, given a rapid transit project for the Fraser Highway corridor was originally slated to be covered by the yet-to-be funded Phase Three plan. 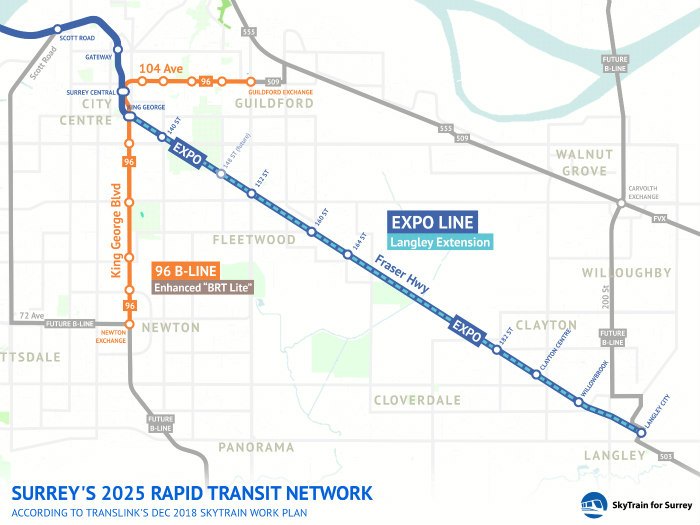 “I think the numbers [TransLink staff] brought to us are better than anticipated,” said Pitt Meadows mayor Bill Dingwall. “Our big concern is cost, but I think the costs have come back much better than what we thought it would be.”

Several mayors also expressed concern that south of Fraser transit investments would affect other regional transit priorities, but both TransLink staff and several mayors, including Surrey mayor Doug McCallum, maintained that the cost of full extension to Langley Centre would still come within the $3.55-billion total funding envelope for south of Fraser rapid transit projects.

“I have always recognized that we need to all work together, we all have priorities. And in the past, I have supported that making sure all areas get better transportation in their communities,” said McCallum.

“I think staff just pointed out that this particular project we’re working on now doesn’t stop any of the other cities moneys or projects that are in the 10-year plan. We’re not asking to go outside of any of the parameters of the 10-year plan for Surrey… The concern that some of you have, that you think maybe your projects in the 10-year plan would not happen because the money will go to other projects, well that is not going to happen and I will vote against any of that.”

There was also a general consensus on the highly positive business case for any portion of the project, including up to Fleetwood. Its benefit-cost ratio of 1.12 is similar to the Canada Line and Evergreen Extension, where economic benefits exceed input costs.

Geoff Cross, the vice-president of transportation planning and policy for TransLink, further elaborated that ridership models of the extension indicate over 60% of the ridership will stay south of the Fraser.

“We do see increasing benefits the further east we go with SkyTrain,” said Cross, adding that a separate street-level LRT line would only have 40% to 60% of the projected SkyTrain ridership due to its lower speed and added transfer to SkyTrain at King George Station.

SkyTrain’s end-to-end travel time from King George Station to 166 Street is about 10 minutes, while the full extension reaching Langley Centre is 22 minutes. Currently, it takes up to 50 minutes to travel on this corridor.

“If we tie this solely to density without looking at why people are traveling through or why they can’t live in my community because there’s not enough density, I don’t buy that argument that it is contributing to the sprawl in the areas,” said City of North Vancouver mayor Linda Buchanan.

She went on to acknowledge that not enough affordable housing is available in the region, pushing more people further east, “so we need to provide them with alternative ways to move throughout the region. I think getting this first phase done to Fleetwood makes sense.”

With today’s approval, TransLink will advance planning and complete a business case for submission to the federal and provincial governments by January 2020.

If all goes as planned with senior government approvals, further planning, and procurement, construction on the extension to Fleetwood could begin in early 2022 for an opening in 2025.

A full extension to Langley Centre would likely be completed in future construction phases, subject to available funding.

“If we went with LRT, people would have to get off the system in Surrey, switch to another system which would make their commute even longer. What we want to do is get people off the road and cure congestion, and by using SkyTrain technology we can do this and nail transportation issues, affordability housing issues, and climate action issues,” said City of Langley mayor Val van den Broek, adding that she would really “hate” to see the Mayors’ Council “become the next Toronto” when it comes to their indecision and sluggish pace of planning and building new subways.

“We are part of the region, and having this line through Surrey to Langley will address regional issues — and not just in our area, but everybody else’s area, just like SkyTrain everywhere else. We need to have a united front, keep the 10-year vision we’ve all had, keeping moving forward, [and] really put the onus on other levels of government.”