Metro Vancouver residents looking for a speedier, frequent alternative to regular bus routes will benefit from the launch of the region’s first RapidBus services, starting on Monday, January 6.

All RapidBus stops have been outfitted with special tall, blue-and-green coloured posts that provide enhanced visibility, as well as useful route wayfinding information, audio voice announcements with the push of a button, and real-time next bus countdown digital signs. 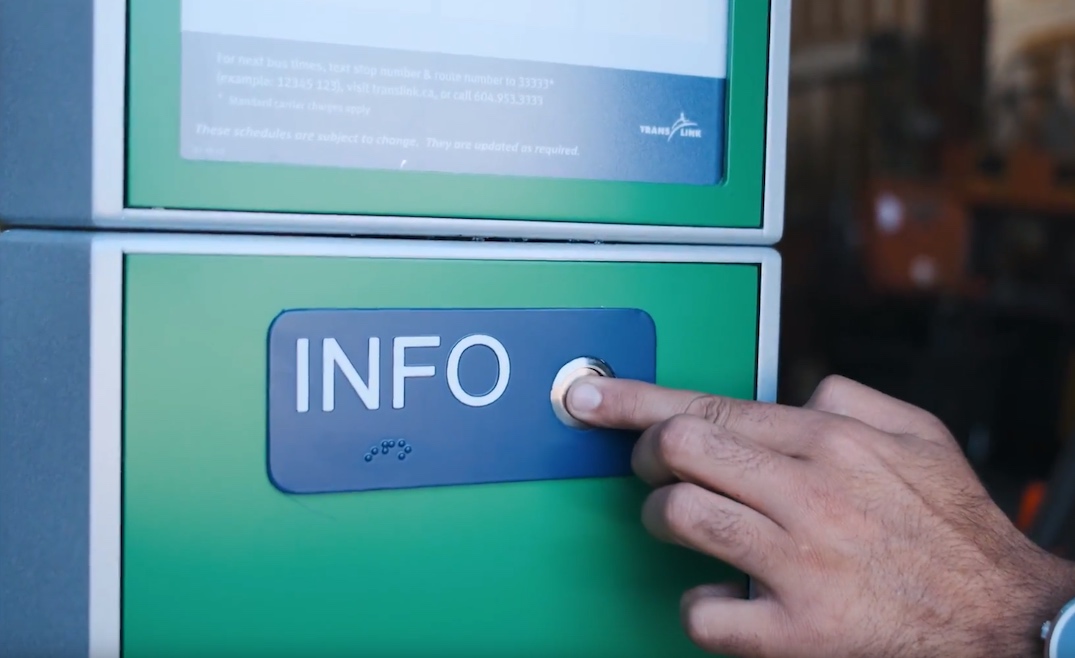 Two of the RapidBus routes are completely new:

Two of the RapidBus routes are upgrades of existing B-Line routes:

The public transit authority has indicated the new services will add 65,000 annual bus service hours, providing a capacity increase of 20,000 people each weekday.

Along with the launch of RapidBus, there will be a number of major permanent changes to existing bus routes on Monday:

Here is a complete rundown of the RapidBus routes:

The R4 running between the UBC main bus loop and the Expo Line’s Joyce-Collingwood Station via Wesbrook Mall, 41st Avenue, and Joyce Street, as well as a connection to the Canada Line’s Oakridge-41st Avenue Station, is expected to be the busiest of the RapidBus routes.

For this reason, it will have the highest frequencies and capacities of the new services, capable of transporting 4,400 passengers per hour during peak periods — approaching the capacity of the 99 B-Line.

Overall, the 41st Avenue corridor will see a 30% increase in transit capacity as a result of the R4. Extensive bus-only lanes, along with queue jumpers and new turning lanes, have already been implemented along much of the route. Further street improvements will be made to the congested Kerrisdale area portion of West 41st Avenue later this year. 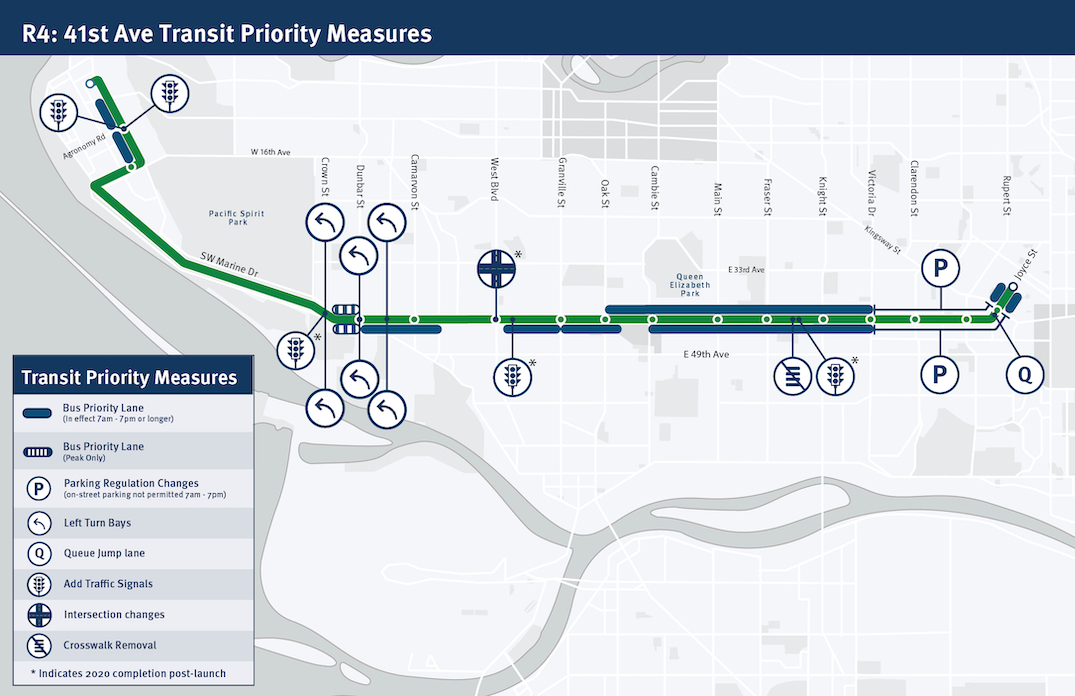 The R3 will run between the Millennium Line and West Coast Express’ Coquitlam Central Station and Haney Place in Maple Ridge via Lougheed Highway.

Extensive stretches of the route have received bus-only/HOV lanes to help speed up the buses. As the route largely runs on a highway, it will have the best competitive travel times. 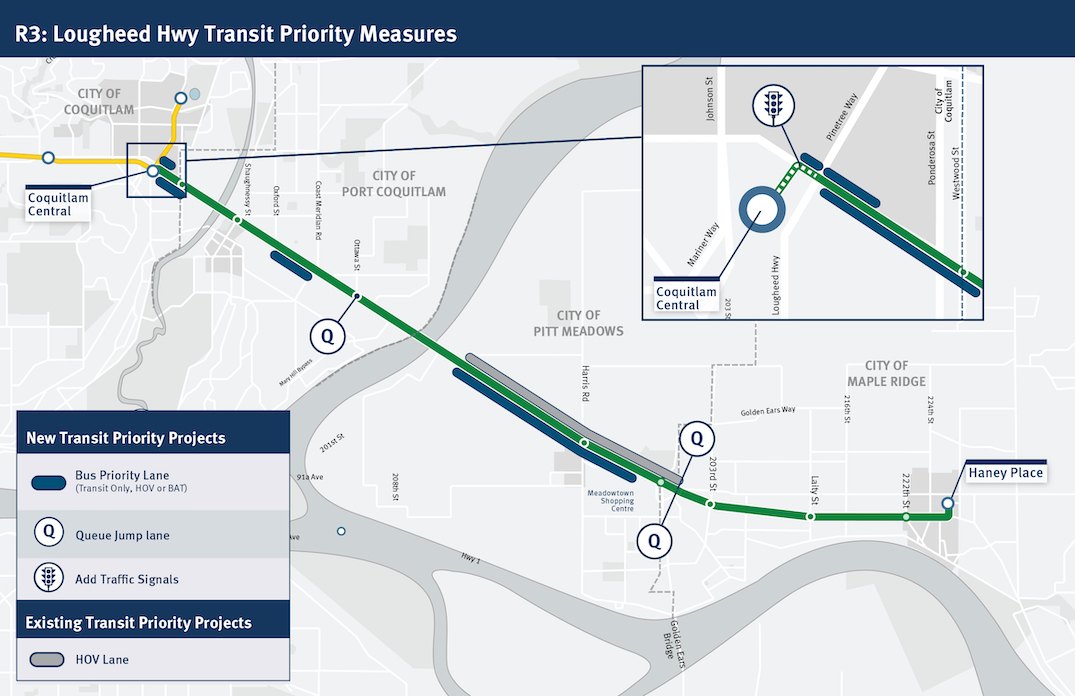 The R5 is an upgrade of the existing 95 B-Line, complete with new passenger amenities including the new buses and the installation of the new bus stop signs with real-time digital displays.

The 95 B-Line currently sees an average of 22,100 boardings per weekday, making it the region’s 10th busiest bus route.

New investments have been made to the 96 B-Line, now that the initial plan to cancel the bus service and replace it with street-level LRT has been axed.

In 2018, funds that were previously dedicated towards a Fraser Highway RapidBus were redirected towards improving the 96 B-Line to a RapidBus standard, as a decision had been made to expedite the Expo Line SkyTrain extension project to at least Fleetwood.

Instead of a RapidBus service, the Fraser Highway corridor’s bus services saw improvements in 2019 with the upgrade of the No. 503 between Langley Centre and the Expo Line’s Surrey Central Station as a frequent, limited-stop express service.

As for the R2 Marine Drive — running between Park Royal in West Vancouver and Phibbs Exchange in North Vancouver District via mainly Marine Drive, with a connection to Lonsdale SeaBus terminal and bus exchange — the launch of the service has been delayed to sometime between February and April in 2020.

This is due to the extra time needed to complete road construction works, including new bus-only lanes, queue jumpers, turning lanes, and new bus stop signs with real-time digital displays.

Additionally, TransLink has made a decision to not elevate the existing 99 B-Line to the RapidBus standard, given the construction impacts that can be expected soon from the Millennium Line Broadway Extension project. But a rebrand of the 99 B-Line can be expected in 2025, when the subway opens and the bus route is truncated to terminate at the new bus exchange at Arbutus Station.

There are also plans to launch at least two new RapidBus routes in 2021, with one route running between the Expo Line’s Scott Road Station and Newton Exchange via Scott Road and 72 Avenue, and another route between the Canada Line’s Richmond-Brighouse Station and an Expo Line station in Vancouver or Burnaby.