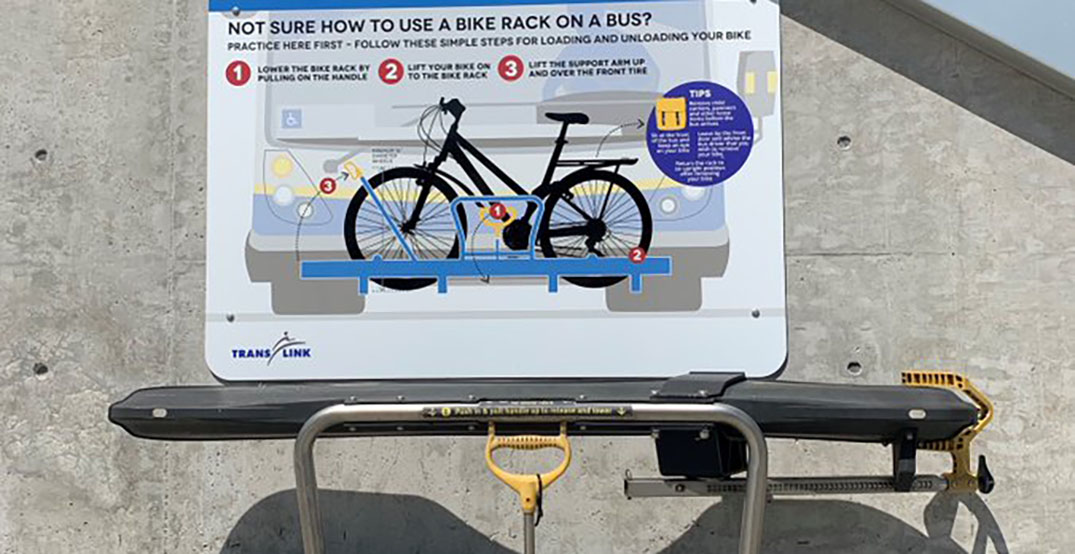 TransLink has installed replicas of its bus bike racks at two more SkyTrain stations in Metro Vancouver so riders can practice loading their bikes before putting them on the bus.

Most Metro Vancouver buses have racks at the front so cyclists can secure their bikes and take transit for longer distances. It’s a handy system, but the racks can be tricky to figure out for cyclists who haven’t used them before.

Add in a bus full of people watching you struggle and a bus driver shouting instructions through the glass, and it becomes a downright stressful situation.

TransLink hopes the demo stations can help cyclists get the technique right so that buses can be on their way faster.

“Nervous about using the bike rack for the first time? Practice with your bike at one of our Rack and Ride demo-stations,” the transit authority tweeted Friday.

The new practice racks are available at Production Way-University and Moody Centre. TransLink installed its first practice rack at North Vancouver City Hall Plaza in 2016 and another at Main Street-Science World in 2018, a spokesperson told Daily Hive.

Correct loading technique involves a few steps. Cyclists first need to squeeze the hand grip to let the rack down, and then slot their wheels into one of the two spots. Finally, riders should clamp the front wheel so the bike doesn’t fall off.

Nervous about using the bike rack for the first time?
Practice with your bike at one of our Rack and Ride demo-stations! Try it out at the following stations:
🚲Main Street-Science World
🚲City Hall Plaza
🚲Production Way–University
🚲Moody Centre pic.twitter.com/flZicyHhFJ