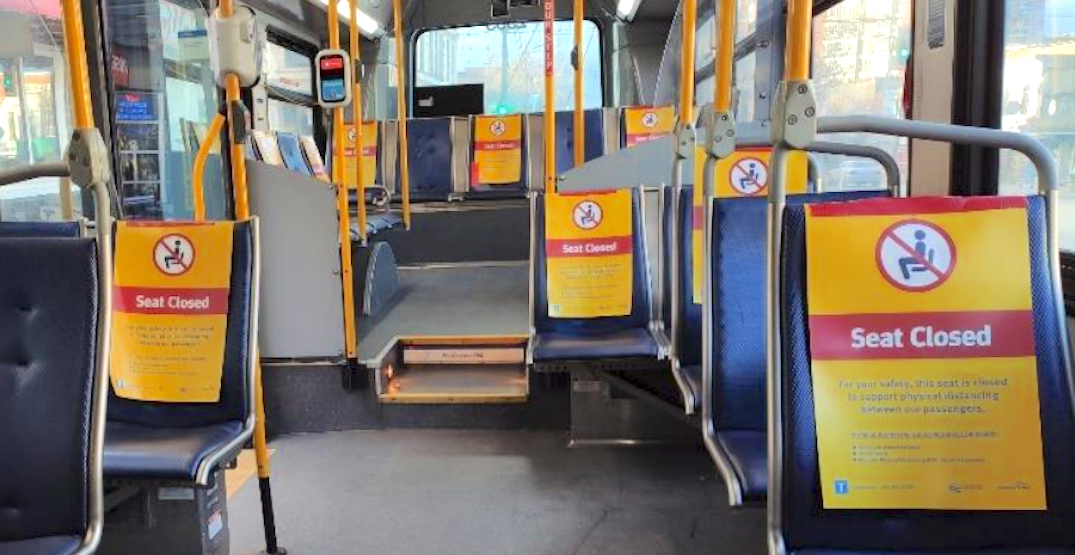 Two months after it implemented severe restrictions on how many people can fit into a bus, TransLink says it will be lifting some of these limits, effective Monday, June 1.

The public transit authority announced this afternoon all buses will be able to accommodate about two-thirds capacity before being deemed full.

“This would be the equivalent of a seat for each customer on board. We are asking customers to use the seats so the operators can better tell if the bus is full enough,” TransLink spokesperson Jill Drews told Daily Hive in an email.

“It’s not mandatory to sit, but it helps operators if people do. It’s ultimately up to the operator’s discretion to determine if the bus is too full to pick up more people.”

Since the start of April, in order to support physical distancing, TransLink reduced the normal capacity of buses by 30% through the measures of limiting seating capacity by 50% and banning standing capacity. Signs were posted onto the “closed seats” to evenly space out passengers across the bus.

The public transit authority says the capacity increase is necessary as a surge in ridership is expected under BC’s plan to restart the economy. The gradual reopening of businesses, attractions, and services, as well as the optimal weather conditions and recreational opportunities, will generate more ridership demand.

Just over the past month, bus ridership increased by over 30%, but TransLink cannot maintain this demand with the previous seating capacity arrangements.

As previously announced, June 1 will also mark the restart of fare collection and front-door boarding on buses. These normal practices are being resumed as TransLink has installed temporary plexiglass extension barriers or vinyl barriers on all buses to protect drivers.

TransLink also announced a number of enhanced health safety practices for passengers and its maintenance procedures, including doubling bus disinfecting sprays to twice weekly in addition to daily cleaning routines, and installing six-foot spaced decals at some bus stops and station entranceways.