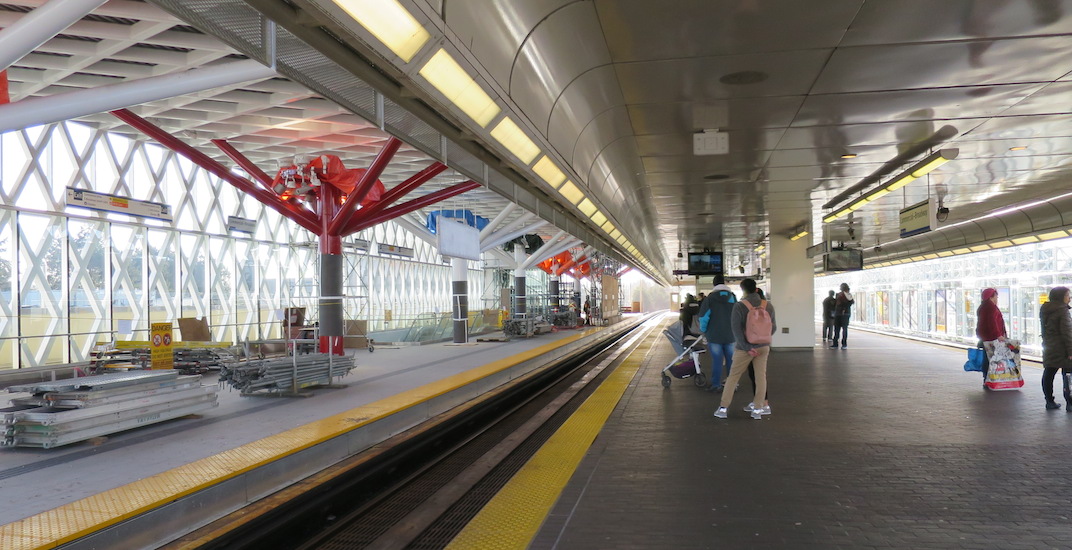 The Expo Line platform area of Commercial-Broadway Station now feels far more open, brighter, and airier with an additional fifth platform, but passengers will not benefit from the huge station capacity increase until early-2019 when the expansion is scheduled to open.

In the meantime, it appears some feathered friends in the form of pigeons are already beginning to get acquainted with the place, and TransLink is less than impressed.

“Pigeons generally are a challenge,” said TransLink spokesperson Aliya Mohamed. “They’re a challenge across the system, they pose health and safety risks for our customers and when they’re in the system they tend to do things like trigger intrusion alarms.”

Pigeons, however, are not a new issue around SkyTrain stations.

“We’ve done a lot of things across the past couple of years to manage the situations,” she added.

In January of this year, TransLink introduced a pilot project in which it partnered with Maple Ridge-based predatory bird operation, Raptors Ridge Birds of Prey, to bring predatory birds, falcons, and hawks to the various stations “in order to change the habits of the pigeons and deter them from returning.”

Now, with the new platform inching closer to completion, TransLink said the Raptors will be returning in 2019 to help combat the problem, and they are “also in the process of looking at something more long-term and more permanent.”

When asked if she could elaborate on what some of those more permanent and long-term plans were as well as a timeline for implementation, Mohamed said she couldn’t get into the details at this point because they are “still working through all of that,” but added that customers should keep an eye out during the “first quarter of 2019.”

Construction on the $60-million SkyTrain station expansion and upgrade project began in mid-2015. The project was originally slated for a summer opening, but it was later pushed to this fall and now early next year.

As a major hub and with the high rate of growth in regional transit ridership, the station is anticipated to become even busier over the coming years, especially once the Millennium Line’s Broadway Extension opens.