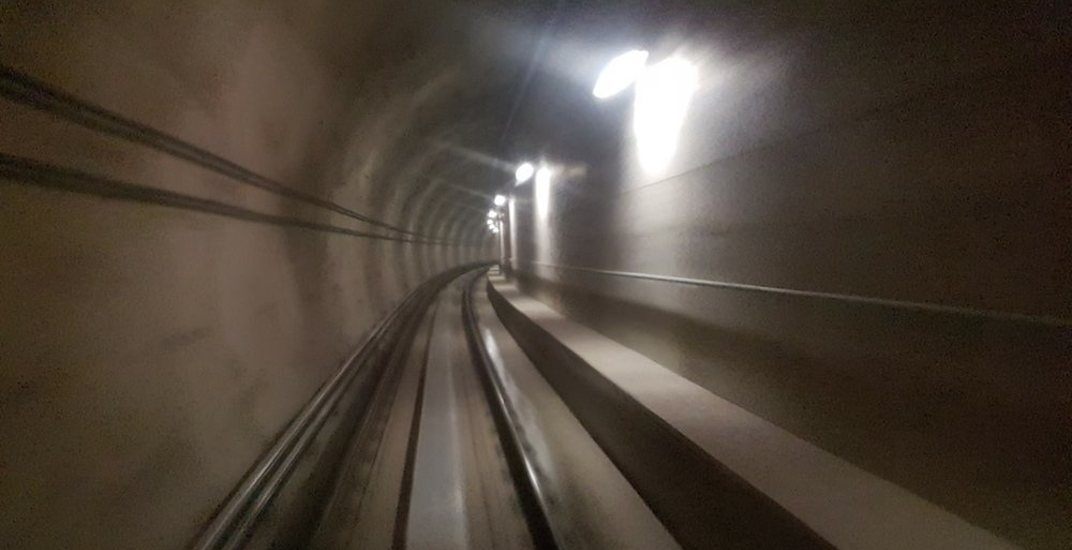 The 2.5-km-long Burquitlam tunnel on the Evergreen extension of the Millennium Line. (Kenneth Chan / Daily Hive)

Transit passengers riding the SkyTrain system can now enjoy seamless LTE wireless connectivity whenever they travel through a train tunnel.

With the completion this week of the installation of wireless service in the 2.5-km-long Burquitlam tunnel on the Evergreen extension of the Millennium Line, all tunnels on all three lines now have wireless connectivity.

Rogers Communications has been working with TransLink over the years to install wireless infrastructure in the SkyTrain tunnels at no cost to the public transit authority.

TransLink stands to receive annual revenue from the ongoing partnership with Rogers, which provides Rogers and Fido customers with connectivity. Up to three additional carriers can partner with Rogers to expand the connectivity to their customers.

Wireless connectivity within the underground portions of SkyTrain began with the Canada Line’s extensive tunnel segment through Vancouver, shortly after the line opened for service.

Then it was introduced to the Expo Line’s 1.4-km-long Dunsmuir tunnel running under downtown Vancouver in July 2016.

This was followed by installation on the short immediately tunnel south of Edmonds Station at the end of 2016 and the tunnels between Columbia Station and Sapperton Station this past summer.

“Our customers have told us that a good transit experience includes being able to use their devices across our system,” said Derrick Cheung, Vice-President Strategic Sourcing and Real Estate with TransLink, in a statement.

“We’re pleased to have worked with Rogers to bring LTE connectivity to all of the Expo and Millennium line tunnels, which ensures Rogers and Fido customers can experience the convenience that consistent connectivity affords, and all passengers – regardless of carrier – have the safety and security of dialling 911 on their devices.”

In a recent interview with Daily Hive, TransLink CEO Kevin Desmond hinted that an announcement on Wi-Fi service on transit property is coming soon. Wi-Fi is already available at SeaBus terminals and onboard vessels.