TransLink is considering a limited-stop express service (No. 222) between Phibbs Exchange in and SkyTrain’s Metrotown Station, with the route traveling along the Ironworkers Memorial Bridge and Willingdon Avenue. Major stops between the destinations will include SkyTrain’s Brentwood Station and the BCIT Burnaby campus.

Funding for this route is being diverted from a previously planned service increase of the No. 231 Harbourside route, but that has been cancelled due to lower-than-anticipated demand.

This reallocation of funds is also supported by both the City of North Vancouver and District of North Vancouver, and it was a recommendation in the findings of the Integrated North Shore Transportation Planning Project, which suggested starting with a peak hour-only service to determine ridership demand.

Another new proposed route (No. 31) would run between Metrotown Station and River District in the East Fraserlands within southeast Vancouver. There is growing traffic demand and a need for transportation alternatives to serve the density forming from the 130-acre redevelopment for up to 15,000 residents and 250,000 sq. ft. of new commercial space.

“We are always looking at our system and finding ways to improve,” says TransLink CEO Kevin Desmond in a statement.

“In a region experiencing unprecedented ridership growth and expecting to grow by more than a million people in the next 30 years – the needs of our customers are changing rapidly. This is a great opportunity for us to better serve our customers while managing our resources more efficiently.”

Under TransLink’s Transit Network Review, new services outlined in Phase Two of the Mayors’ Council’s 10-year plan and alterations to existing routes will improve reliability and efficiency. A report outlining initial public consultation feedback earlier this year from all 12 proposals will be released in the coming months.

Service changes and improvements from the current review could begin as early as next year.

For the latest public consultation on the two new proposed routes, an online survey will be open until November 11, 2019.

Proposed route of No. 31 River District/Metrotown 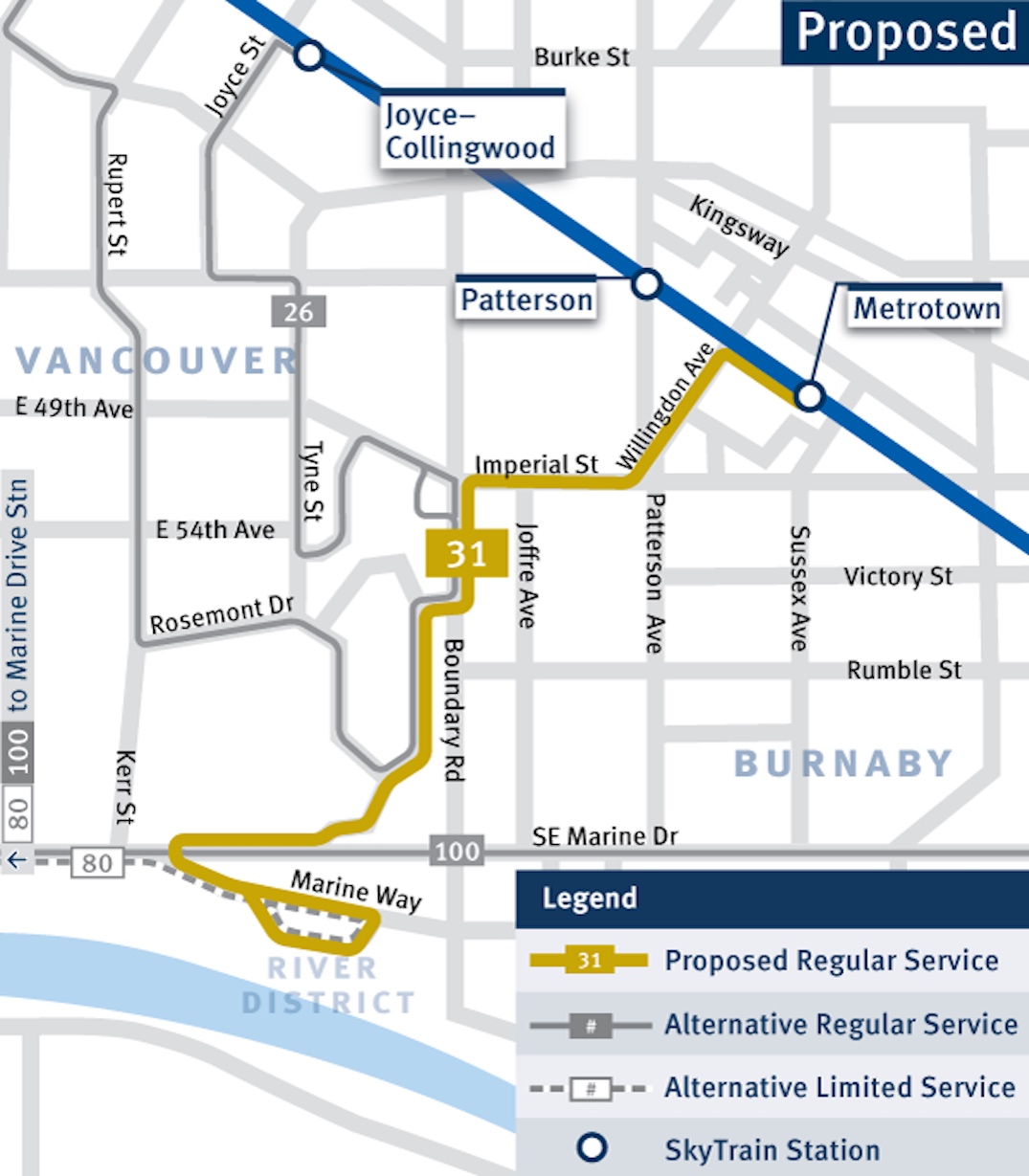 Proposed bus route of No. 31. (TransLink)

Proposed route of No. 31 Phibbs Exchange/Metrotown