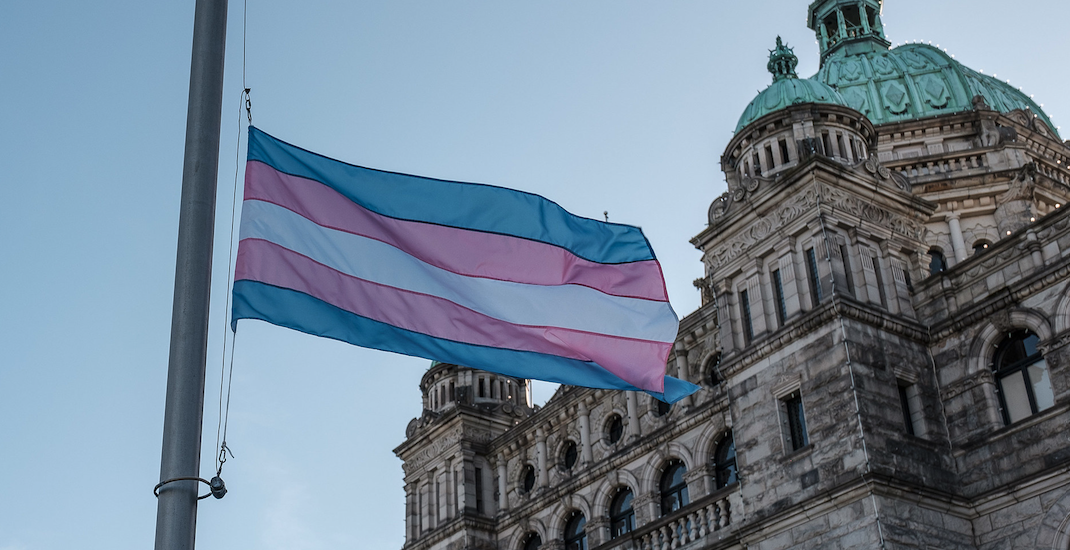 The transgender flag was raised at the BC legislature today to commemorate the Transgender Day of Remembrance.

“November 20 is the day when we honour the memory of transgender people who have been attacked, injured and murdered in acts of transphobic violence,” said Mitzi Dean, BC’s Parliamentary Secretary for Gender Equity, in a statement. “It is also the day when we affirm our commitment to end transphobic violence and build a province where trans, non-binary and Two Spirit people can safely live their lives, affirmed in who they are.”

Dean said the violence trans people experience, “especially trans people of colour and trans people with disabilities, is on top of the discrimination they too-often face in housing, employment and everyday life.”

“Each of us,” Dean continued, “needs to do our part to make sure BC is a place where trans people are safe, welcome and given opportunities to succeed.”

And although “much has been done to better support transgender people in BC, we know we still have a long way to go.”

“Today, Dean concluded, “we remember those we have lost – the parents, siblings, partners, friends and co-workers – whose lives were cut short by transphobic violence, and we recommit to making our province one that is safe and truly inclusive for all.”

On Twitter, BC Premier John Horgan said today, “we honour those who have lost their lives or been targeted by acts of transphobic violence, harassment and marginalization. Our government was the first to raise the transgender flag at the legislature and we fly it proudly once again in 2020.”

And “while we can’t gather together like this event last year, we will not waver in our commitment to make BC a place that’s safe and truly inclusive for everyone.”

The Transgender Day of Remembrance began in 1999 by transgender advocate Gwendolyn Ann Smith, who created a vigil to honour the life of Rita Hester, a black transgender woman who was killed in 1998.

According to GLAAD, “the vigil also commemorated all the transgender people lost to violence since Hester’s death, and began an important tradition that has become the annual transgender day of Remembrance.”

The Transgender Day of Remembrance is now observed across the world.

“Today, we invite British Columbians to remember those who have been killed by transphobia as we raise the transgender flag at the BC legislature for the first time in history,” stated Horgan and Dean.

“This moment is long overdue. In a better world, it would be a moment of celebration. But in this world, where so many trans people are hurt and killed for who they are, it is a call to fight for justice for all.”