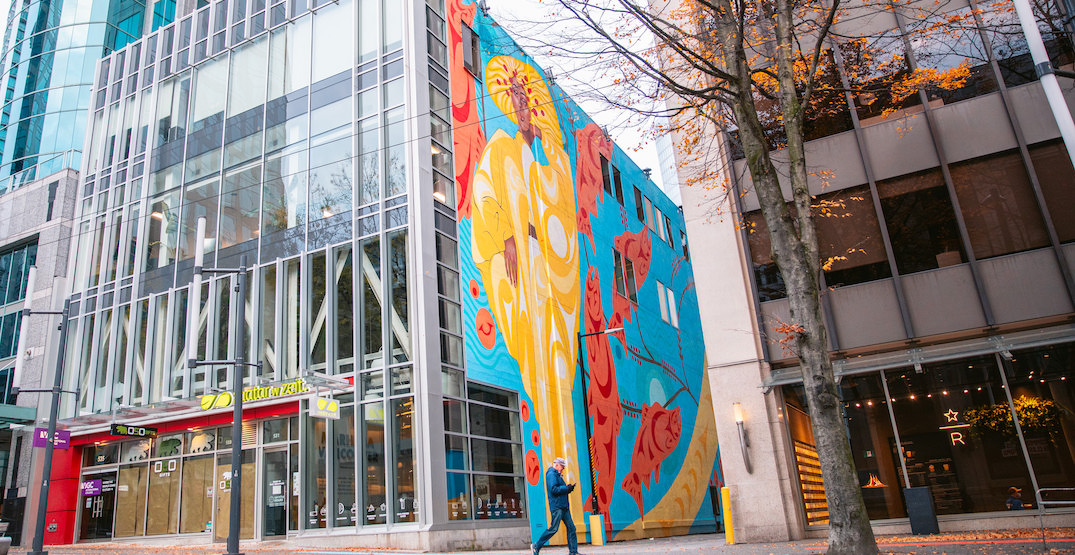 Another colourful laneway transformation project has been completed by the Downtown Vancouver Business Improvement Association (DVBIA).

The Snekwem laneway is located near the southwest corner of the intersection of Granville Street and West Pender Street — just behind the Starbucks Reserve Bar location.

Together, local artists James Harry and Lauren Brevner turned the grey walls of the laneway into a canvas for a mural with blue, yellow, and salmon-red colours.

The design is their modern interpretation of a traditional Squamish First Nation story about how the salmon came to local waters, based on the story passed down to Harry by his father. It speaks of visitors with supernatural powers who, with the help of Snekwem, meaning the sun, led the Squamish people to the village of the salmon people. 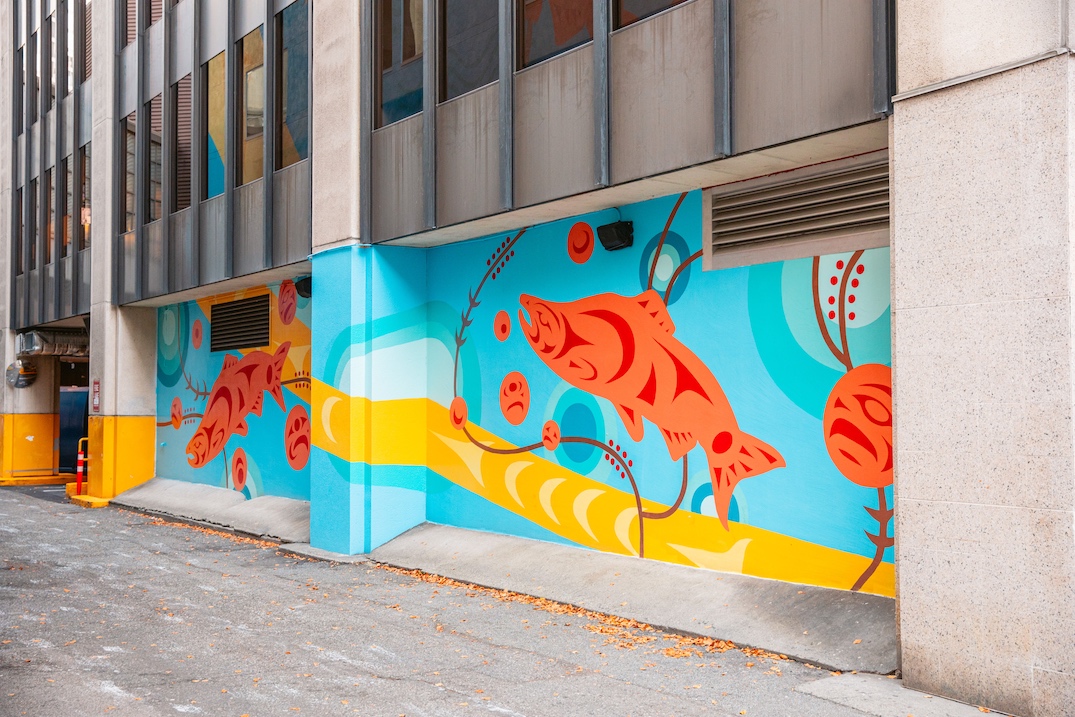 The focal point of the mural is a 50-ft feminine figure personifying the spirit of the sun and seven chinook salmon, which are the first salmon species to run every year.

Furthermore, seven is a significant number for Indigenous people as it represents the “Seventh Generation Principle” — a philosophy that the actions we make now impact the future seven generations. 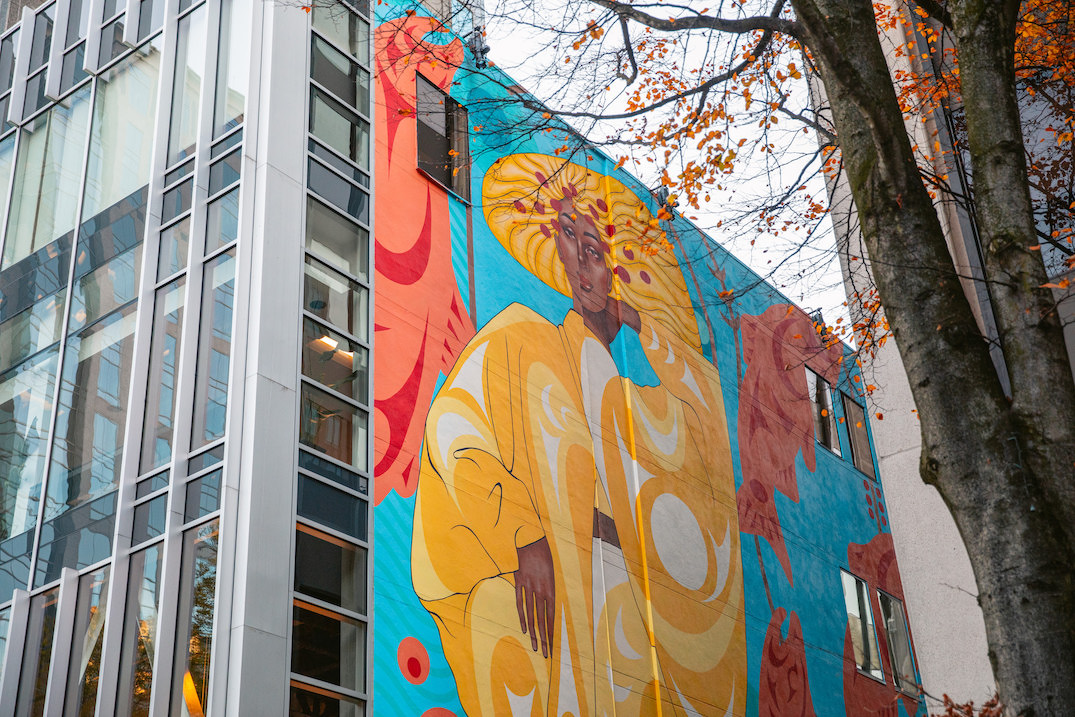 “Despite the challenging circumstances we find ourselves in, we’re proud to continue to support local artists, some of the hardest hit by the pandemic and the restrictions in place,” saidCharles Gauthier, president and CEO of the DVBIA, in a statement.

“The DVBIA is dedicated to showcasing more Salish art within downtown public spaces. Laneways have a vast amount of untapped potential, and our transformation projects use art to brighten and animate a nondescript space that further encourages people to explore downtown.”

This is the DVBIA’s fourth laneway transportation, after the nearby Alley Oop pink laneway, Ackwery’s Alley next to the Orpheum Theatre, and the Canvas Corridor in the Eihu laneway between Alberni and Robson Streets west of Burrard Street. 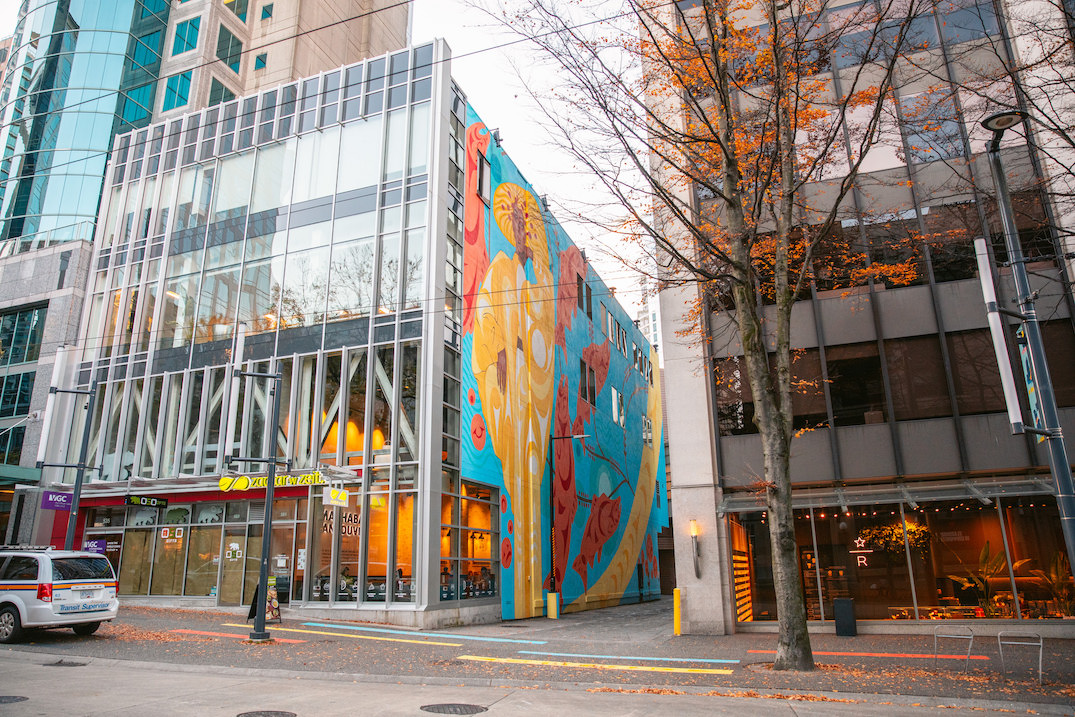