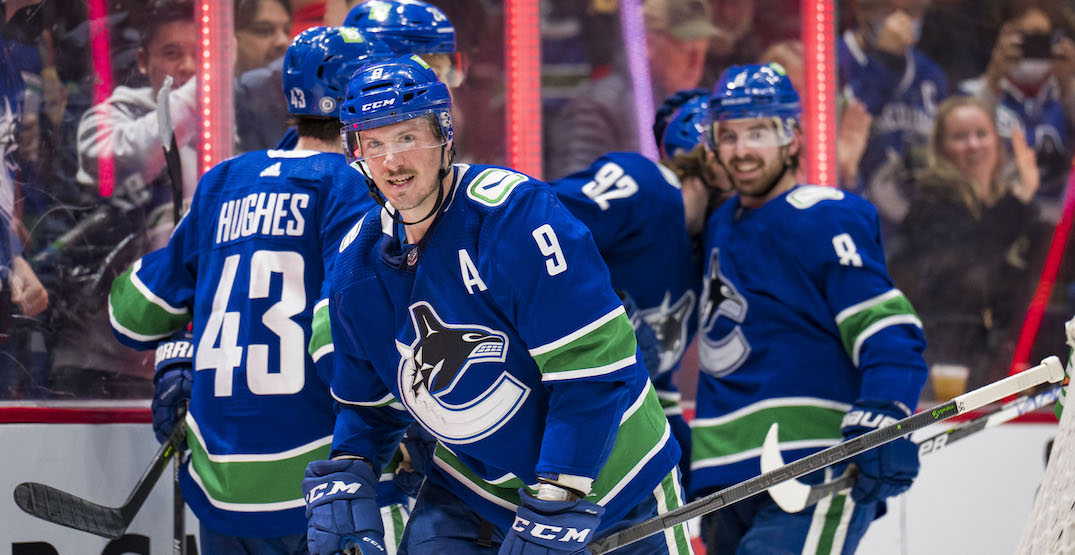 However, the most intriguing component of his list is no secret. That is, what will the Canucks do with J.T. Miller?

Miller is on an affordable cap hit of $5.25 million for one more season before he’ll demand a massive raise.

CHEK TV’s Rick Dhaliwal reported last Friday with his report that the Canucks have been listening for offers on their star forward since February. He also reported that Miller’s camp isn’t surprised by these trade rumours.

Here are six teams that make the most sense as destinations in a potential Miller trade.

However, with captain Patrice Bergeron reportedly agreeing to sign for one more season, there may be some slim hope left for the B’s.

One target for the Canucks to consider in this trade is hulking right-shot defenceman Brandon Carlo. The 25-year-old has a cap hit of $4.1 million for the next five seasons.

The Carolina Hurricanes are currently one of the best teams in hockey.

However, one thing that’s held them back is a lack of true star power.

Adding a guy like Miller would give them a true star at the top of their lineup.

Carolina has the assets to make the deal. A young centre like Martin Necas (who struggled this season) or Jack Drury could be the centrepiece of the deal, along with a high draft pick.

Could Miller continue his NHL career in his home state of Ohio?

While the Columbus Blue Jackets aren’t contenders right now, they’ve done well to rebuild their team and stock their prospect pool since seeing a couple of their top players exit during the 2019 offseason.

With young centres like Cole Sillinger and Kent Johnson on the rise, Miller could be the perfect player to insulate them during their development.

Heading into the draft, Columbus holds first-round picks at sixth and 12th overall. Right-shot prospect defenceman Corson Ceulemans, who was drafted 25th overall last year, would also be an attractive player to target.

Similar to Columbus, the New Jersey Devils aren’t in their Cup window.

However, they have a talented young core, along with assets to make this trade.

Devils general manager Tom Fitzgerald mentioned that he was “considering all options” with their first-round pick, but that was before they vaulted into the No. 2 slot in the draft lottery.

Devils centre Pavel Zacha was mentioned as a possible target for Vancouver during the trade deadline, but right-shot centre Michael McLeod would be a more suitable target. The 24-year-old is already a bona fide shutdown centre, reliable penalty killer and face-off ace for New Jersey.

Although Ohio is Miller’s home state, Pittsburgh is the closest NHL team to his hometown, being only one hour away from East Palestine, Ohio.

The Pittsburgh Penguins are one of the most interesting teams to watch this offseason. A recent report from Josh Yohe of The Athletic suggests that Evgeni Malkin is unlikely to return at this point, which would open the door to Pittsburgh acquiring a centre like Miller.

Yohe’s report also mentioned that Miller and Pittsburgh native Vincent Trocheck – two potential Malkin replacements – have been skating at the UPMC Lemieux Sports Complex on the outskirts of Pittsburgh.

The Penguins have the 21st overall pick in this year’s draft. They also have John Marino, a right-shot defenceman whom Jim Rutherford signed to a long-term extension. Yohe’s article also mentioned that Penguins’ current general manager Ron Hextall isn’t as crazy about young defenceman Pierre-Olivier Joseph as Rutherford was.

While Pittsburgh may be in the market for a top-six centre, the Washington Capitals already are.

The team announced last week that 34-year-old Nicklas Backstrom will be undergoing a lengthy recovery after he had hip resurfacing surgery just over a week ago.

It’s the same surgery Ryan Kesler underwent in 2019. He hasn’t played since.

Acquiring Miller would be an all-in move for the Capitals, who are already one of the older teams in the league.

The Capitals have the 20th overall pick in this year’s draft. While their prospect pool isn’t deep, 20-year-old centre Hendrix Lapierre and 19-year-old right-shot defenceman (and Coquitlam native) Vincent Iorio are intriguing pieces.