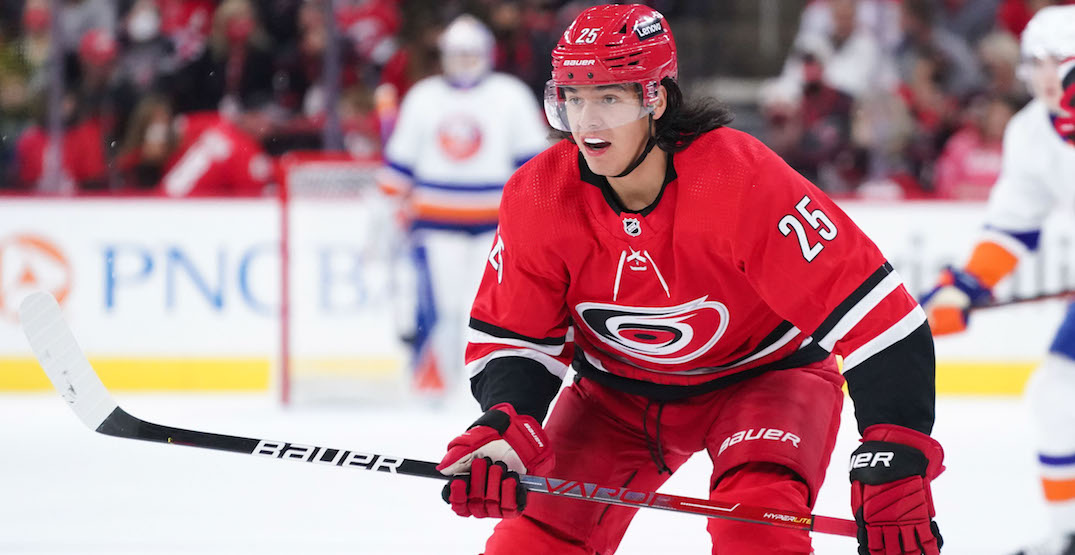 Ethan Bear is on the trade block and the Vancouver Canucks may be interested.

Bear, a 25-year-old right-shot defenceman, is a pending restricted free agent but is reportedly not close to re-signing with the Carolina Hurricanes.

Sportsnet’s Elliotte Friedman reported last week that Bear has been given permission by the Hurricanes to speak with other teams, with the aim to facilitate a deal.

Bear’s agent has spoken with the Canucks, according to CHEK’s Rick Dhaliwal.

“Early contact has been made between the agent and the Vancouver Canucks, but it’s way too early to tell where this goes,” Dhaliwal said on Monday’s edition of Donnie and Dhali. “Very, very early in the stages.”

Bear counted $2 million against the salary cap last season and is due a $2.5 million qualifying offer to retain his rights. Last season was Bear’s first in Carolina after the Edmonton Oilers traded him for Warren Foegele last July.

In our first segment @DhaliwalSports had a few #Canucks tidbits including their interest in RFA Ethan Bear.https://t.co/h4e2SKLzpb pic.twitter.com/UyrbMBt76o

Bear didn’t appear in any of Carolina’s 14 playoff games and was seen on crutches when he spoke to the media at the end of the season. Bear also had to deal with breathing problems caused by COVID-19, according to Hurricanes beat writer Chip Alexander.

The Canucks are looking to get younger and could use another right-shot defenceman. Vancouver currently has three right-shot blueliners signed to one-way contracts in Tyler Myers, Luke Schenn, and Kyle Burroughs. Travis Dermott, who is also under contract, shoots left but can play the right side.

The question is how highly the Canucks management team values Bear as a player. His $2.5 million qualifying offer is hefty for a sixth defenceman, which is where he slotted in with Carolina last season. He’s just two years removed from playing 21:58 per night, though that was on a thin Oilers blue line.