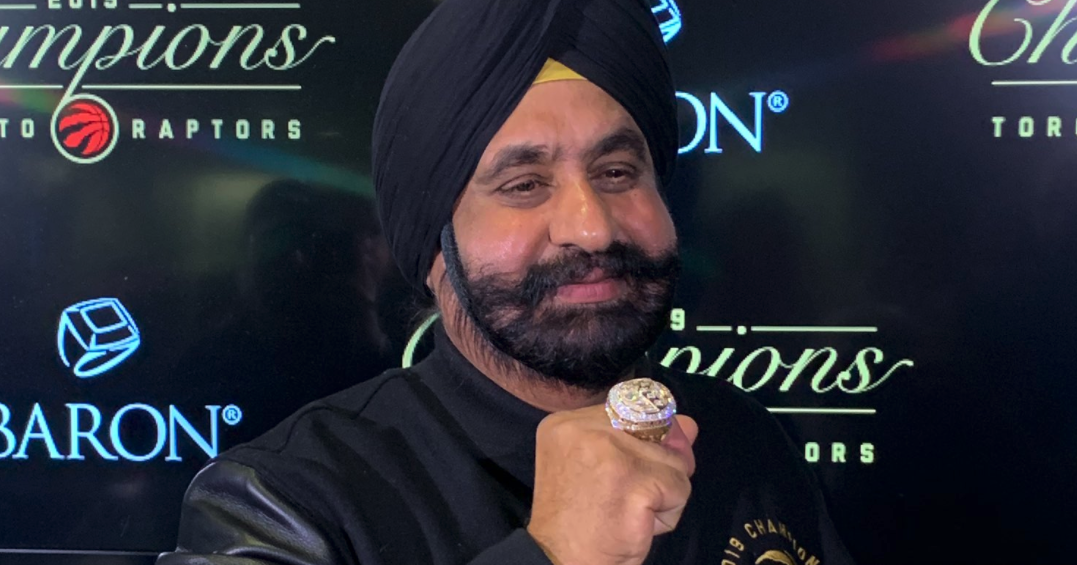 Toronto Raptors Superfan Nav Bhatia has returned an award he received for Global Indian of the Year to the Canada India Foundation (CIF).

In a lengthy statement issued on Monday evening, Bhatia explained his reasoning for giving back the award, which also came with a $50,000 donation to Bhatia’s World Vision Canada Daughters of India Initiative, which helps build washrooms for girls in need in India.

“On Sunday evening I watched my pre-recorded acceptance speech and the show for the first time like many. The past 24 hours were supposed to be a celebration for all those little girls in Rajasthan but it has been far from that,” stated Bhatia.

Prior to the pre-recorded presentation, the World Sikh Organization (WSO) released a statement on social media, urging Bhatia to reconsider accepting the award due to the CIF being “steadfast Sikh Genocide deniers and [having] a history of being Indian state violence apologists.”

The WSO attached screenshots of a letter the CIF sent to Ontario Premier Doug Ford in response to Ontario MPP Gurattan Singh’s Private Member’s Bill calling on the province to observe the first week of November as Sikh Genocide Week.

In November 1984, an estimated 3,000 Sikh men, women, and children were killed in the span of four days following the assassination of Prime Minister Indira Gandhi by her Sikh bodyguards. Much of the violence took place in Delhi, the country’s capital city.

.@superfan_nav, as someone we have recognized in the past as an advocate that raises awareness on the 1984 Sikh Genocide, we ask you decline the @Cif_Official1 award.

The CIF have been steadfast Sikh Genocide deniers and have a history of being Indian state violence apologists. https://t.co/sFiAc7O79s pic.twitter.com/JzDA2sdXFm

The WSO also stated that the CIF has invited “known Hindutva supporters & supremacists to speak at its events.”

“This is what you are being associated with & unknowingly supporting… We sincerely ask you, on behalf of Sikh Canadians across this country, to reconsider accepting any award from the [CIF],” the WSO stated in its tweet to Bhatia, who is a Sikh from Punjab, a northern state in India that is home to the majority of the country’s Sikh population.

Bhatia has previously noted that he fled to Canada for safety during the 1984 anti-Sikh riots.

He reiterated this in his recent statement.

“I came to Canada in 1984 after the Sikh genocide. Many Sikhs lost their lives. My own father was almost dragged out of a car and a burning tire was almost placed over his head. He was moments from death. He was lucky. We were lucky. Many were not as lucky,” he wrote.

“Canada is my haven. It is my heaven on earth.”

Bhatia said that while watching his pre-recorded acceptance speech, he was “made privy at this point to a lot of new information” regarding the CIF.

“I have been quiet. Not because I did not know what to say. I wanted to do my own due diligence. I made countless phone calls. I spoke to many prominent figures. I even visited the CIF (Canada India Foundation) offices to understand their exact stance on many issues. See, I am not a political person, I stay away from politics to be honest,” he stated.

“But I am a proud Sikh. And that is first and foremost. As a result, my heart cannot accept this award at this time. Not while my brothers and sisters across India are in pain.”

Currently, the largest peaceful human protests are also taking place in India, involving hundreds of thousands of farmers — many of them from the Sikh-dominant state of Punjab.

The farmers are concerned that the laws, which bring corporations into the controlled agricultural sector, will leave them at the mercy of large corporations and lead to the ultimate loss of their land and livelihood.

Bhatia also said that he stands “with all of the farmers of India,” adding that he is praying for “a safe and peaceful resolve.”

As for the CIF’s $50,000 donation to the Daughters of India initiative, Bhatia stated that if “the Canada India Foundation would like to continue with their donation then great, if not then I will personally donate the $50,000 needed to begin Phase IV.”

Bhatia says that so far, the charitable initiative has built or renovated 180 washrooms for girls in Faridkot, Punjab. Phase IV of the project is focused on building 100 washrooms and a basketball court for girls in Alwar, Rajasthan.

The CIF released a statement regarding Bhatia’s decision to return the award on Monday night.

“CIF regrets the decision and circumstances under which Nav Bhatia chose to return the Global Indian of the World Award,” stated the CIF.

“The true spirit of this Award is recognizing and celebrating the role, success, and contribution of an outstanding global Indian every year. To be drawn to India’s current politics or to pronounce on historical debates is not in the spirit of the Award.”

Daily Hive has reached out to the CIF for further comment regarding the $50,000 and if it will still be donated to the Daughters of India initiative.