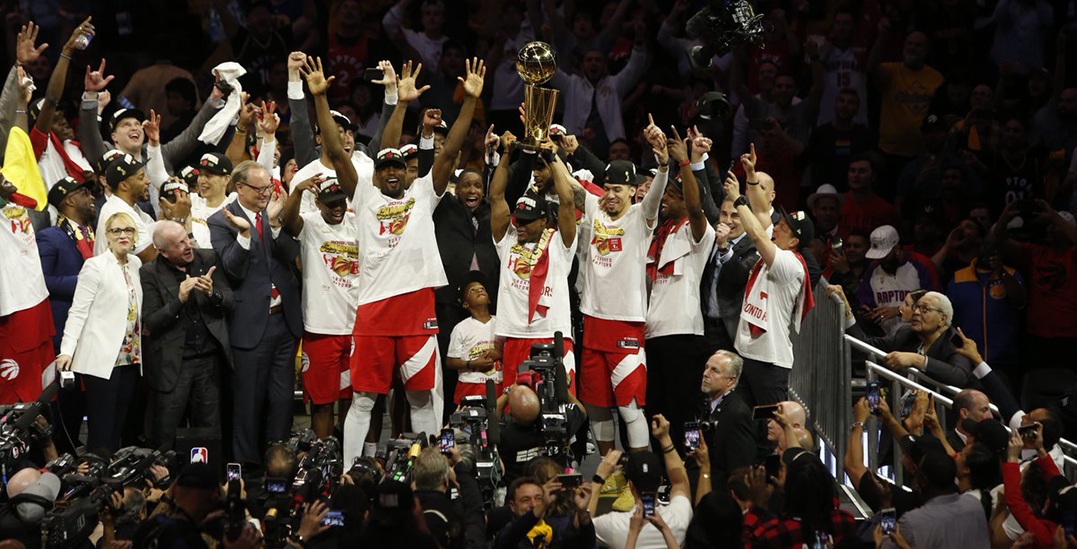 The Toronto Raptors have won their first NBA Championship in franchise history and it seems that all of Canada is celebrating with them.

It’s only natural, after all, given that the Raptors are the first Canadian team to ever win an NBA Championship.

Those that weren’t filling up the streets of downtown Toronto or watching from one of the many Jurassic Parks across Canada, took to Twitter to share their joy.

Here are some of the best reactions from last night’s historic win:

Jeremy Lin becomes first asian to get a ring.

Raptors won it all for canada while dethroning the warriors dynasty.

Kawhi is actually smiling and dancing around during his computer malfunction.

It took 73 years since the first ever NBA game was played in Toronto at Yonge and College, for the Toronto Raptors to win an NBA Championship.

read three essays this morning and they were all great, i can only conclude that the raptors win is already improving the universe

I’m incredibly proud of the raptors. I’ve been rooting for this team to win a championship for YEARS! And they finally did it with my second favorite player. They decided to end the warriors dynasty and stopped them from. 3 peating. Congrats! #WeTheNorth pic.twitter.com/WNPR9EBmP3

Just waiting for the big one now

I have been the biggest NBA follower since I was a little girl when the Raptors did not even exist. Never in my lifetime did I imagine this historic moment in Canada. Our Raptor players did it as TEAM and brought an entire nation together! #nbachamps #wethenorth #RaptorsIn6ix 🏀 pic.twitter.com/Z5QZZv6XBp

Nav Bhatia: Raptors fan since it’s inauguration in the NBA.

Ohh, just here crying listening to all the different language and cultures celebrating the Raptors win on @metromorning #wethenorth

Woke up to so many friends, some who don’t even like 🏀, text congratulating me on the Raptors championship.

2 years ago, Kawhi Leonard lost his season, his franchise’s trust and his respect. Since then, he’s moved to Canada, put together a top-five playoff run of all-time, and brought in the first championship in Toronto Raptors history. #NBAFinals pic.twitter.com/6kdG3RSyFi

Kawhi of House Leonard, First of his name, The Unfazed, Hitter of Game 7 buzzer beaters, King of the North, Finals MVPS and Toronto mans, Khal of the Great Lakes of Ontario, Protector of rims, Sir Klaw of the NBA Kingdoms, Breaker of dry streaks and Father of Raptors! #Raptors pic.twitter.com/njN774lfxl

For underestimating this scrappy team where the HIGHEST pick is #15

For Steve Francis, refusing to play in 🇨🇦

For for being bold in trading for Kawhi & Gasol

For 37 million cheering for a night 24 yrs in the making#WeTheNorth pic.twitter.com/tDXHpbgA29

The Raptors won the NBA Championship and don’t even have to think about going to the White House. Another W.

Kawhi Leonard – First of his name, Cali born, The Klaw, Defensive Monster, Fun Guy, Stopper of Giannis, Slayer of Dynasty’s, Twice Most Valuable Player of the Finals, King of the North, Champion of the Six & Greatest Raptor ever. #WeTheNorth #Raptors pic.twitter.com/QNsggoPxeQ

An overriding thought from last night amidst the jubilance, pride and camaraderie out on the streets of #Toronto:

We should do this more often.#rtz #raptors

Thank you Masai, you special man.

I’m extremely happy for @Klow7. The heart of the @Raptors for 7 years. After so many ups and downs in his career, finally a champion. 👏🏽 👏🏽

So incredibly proud of this city, the fans, the team @Raptors, their resilience, doing it our way, with intense defence and focus. To do it against the best team of our generation means so much as well. #WeTheNorth #WeTheChamps #Toronto #NBAFinals #hatersgonnahate #believe

Because we can’t get enough of the @Raptors, we just booked the @ICTorontoCentre for Sunday night and are pulling the kids out of school on Monday to do the parade! THIS IS SOMETHING THEY WILL NEVER FORGET! #WeTheNorth #notsponsored #Raptors