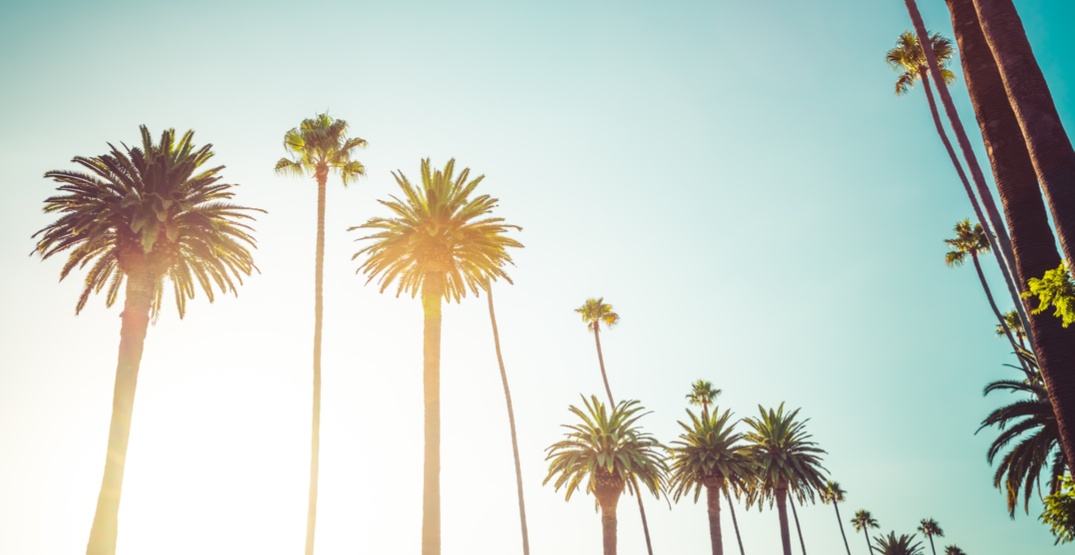 Los Angeles County is a vast, sprawling urban region that consists of many awesome areas to check out – 88 cities, to be exact!

The definition of setting yourself up for success in LA is picking a central home base and then exploring everywhere around it. We recommend renting a car so you can see as much as possible without spending a ton on Ubers (although this is a great option too if you’re looking to enjoy some boozy bevvies).

Here are a few of our favourite areas that make up the county of Los Angeles. 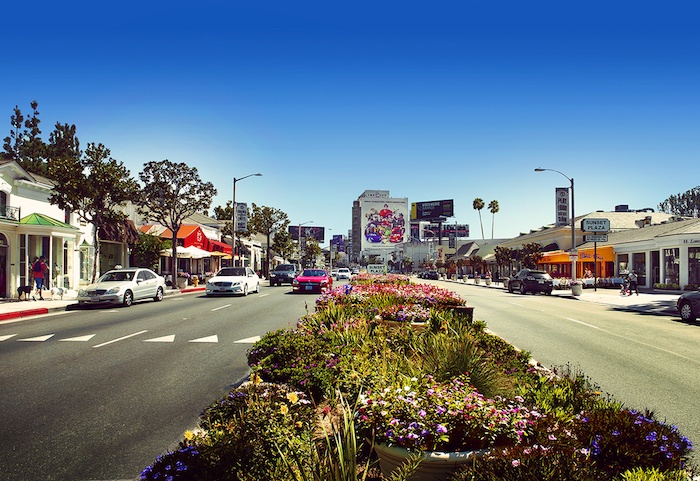 The trendy hotspot of West Hollywood (affectionately known as WeHo) is smack dab in the middle of all the action and is a perfect home base for exploring La La Land. There are plenty of hip hotels in this city, although they can be a bit on the pricey side. A stay at La Peer Hotel will do you just right and won’t break the budget as much as some of the other extravagant accommodations in the area.

The WeHo scene is trendy, casual, and luxurious all at the same time. Being an art, food, and culture hub of LA, this area will cross off all items of your trip checklist. From rooftop dining and speakeasies, to world-class design and boutiques, you’ll find what you’re looking for here.

Make sure to visit the rooftop bar Catch LA for its bird’s-eye views of city and A+ menu. We promise you will be impressed. The speakeasy Employees Only is a must-go for cocktails in a one-of-a-kind atmosphere. Be sure to have your palm read while you’re there. 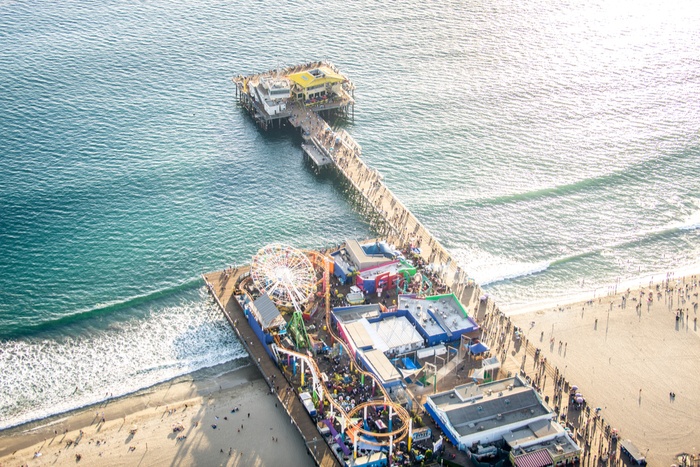 Santa Monica pier from above. (Shutterstock)

This is a must visit (and very gram-worthy) scene. Start by strolling the many shops and stopping for a patio bev along the Third Street Promenade. Then head down to the promenade where you can ride a roller coaster, win your loved one a stuffy, or take in the beautiful beach scenery on the Ferris wheel.

Pro tip: If you want to save some mula, book your parking spot online in advance. 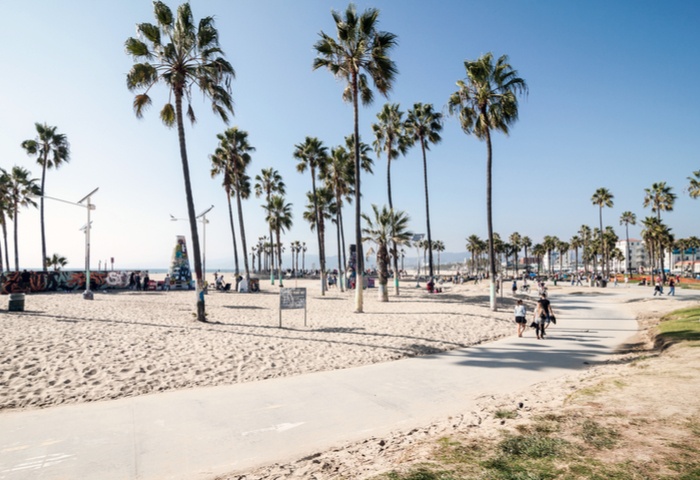 A short drive from Santa Monica, or about a 40-minute drive from West Hollywood (traffic depending) is the unique Venice Beach (this one’s not actually a city like the rest of the areas on this list). Come here for the laid-back vibes and picturesque sandy beach – and then stay for the people watching. The people of Venice are bringing a whole new meaning to turnt. Between the Muscle Beach gym, the skateboarders, and people decked out in costumes that we want to borrow for Halloween, there is always someone interesting to see in Venice.

We recommend renting a bike from one of the vendors along the promenade and cruising till your heart’s content along the sandy stretch. Stop near the graffiti-covered palm trees for that signature Insta pic, right by the skate park.

About a 15-minute walk from the beach, do yourself a favour and scope out our pick for trendiest street in LA (dare we say – in the country? In the WORLD?) – Abbot Kinney Boulevard. From the boho chic clothing and decor shops to the best veggie lunch spots, this is a must-visit. The palm tree-lined streets and vibrant murals make for great photo ops. Your feed will thank you. 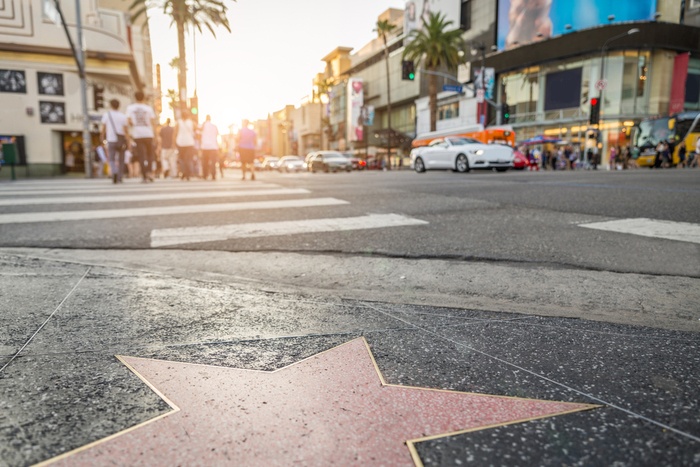 When visiting LA, you have to check out the centre of the star-studded city. Hollywood presents epic views of the hills, venues you’ve only seen on awards shows, and if you’re lucky, a celeb spotting or two.

If the stars are what you’re after, step along the Hollywood Walk of Fame to see the handprints of Mickey Mouse and Charlie Chaplin etched in the concrete on your path.

Look up to the hills to catch a glimpse of the iconic Hollywood sign. You can hike up behind it or drive to the bottom of the hill and snap a photo.

A short drive over from the sign rests Griffiths Observatory at the top of it all. We recommend hitting the grocer on the way to have a picnic at the top to take in the views. This way, you’re saving a buck or two while having a picnic above the city. We call this high-end dining.

From there, lose yourself in another world at Universal Studios as you stroll through the movie sets. A short drive from the hills and a 30-minute drive from WeHo, you’ll find the Wizarding World of Harry Potter, among other rides and attractions.

Harry Potter fans, listen up: hit the park early and head to the Wizarding World first thing. You’re not the only one wanting to get your sorting hat on, and it’s the best way to beat the lines. 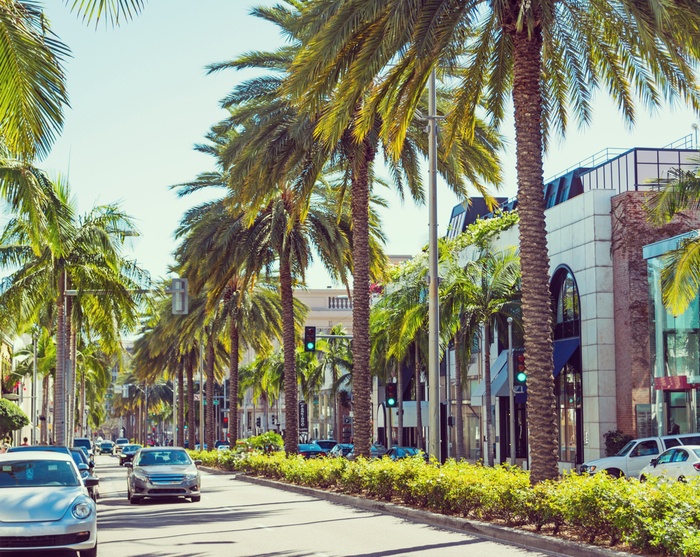 You won’t get a true feel for Los Angeles without a tour of Beverly Hills. In this area of enviable houses and perfectly manicured properties, take a guided bike tour; it’s more affordable than a bus tour and you have a private guide that will allow you all the time you need for stopping at Marilyn Monroe’s old stomping grounds and Elvis Presley’s former mansion.

Tour company Bikes and Hikes LA located in WeHo has bicycles with electronic assistance, so if you’re still recovering from the LA nightlife the next day, you can still ‘bike’ up those Hollywood hills.

For those of you who dream of expensive goods, stop by Rodeo Drive for all your window shopping fantasies. There are also some more affordable shops in the area for those of you looking for some retail therapy during your trip.

There are many other areas of Los Angeles to discover, but these are a few of our must-sees. You really can’t go wrong in LA, so you’ll just have to explore for yourself.