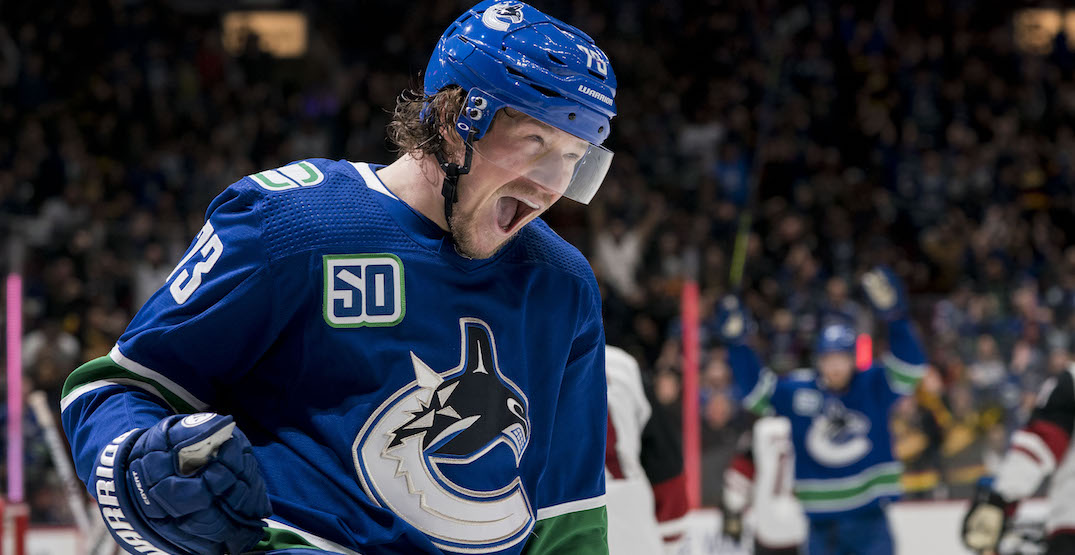 Tyler Toffoli wanted to return to the Vancouver Canucks this past offseason but was never offered a contract.

The former Canucks winger, who ranks seventh in NHL goal-scoring this season with 28 goals in 52 games with the Montreal Canadiens, revealed that and more in an article published in the Players’ Tribune today.

Toffoli couldn’t have spoken more glowingly about his time in Vancouver, where he produced 10 points (6-4-10) in 10 games before the pandemic ended the regular season.

The Scarborough native said he felt “rejuvenated” and spoke highly of the “incredible chemistry” he had with Elias Pettersson and J.T. Miller.

He said he and his wife felt a “real connection to the city” and added that it “seemed like the start of something special.”

“From the second I got on the ice there, I just loved it,” Toffoli said. “I was on a line with Petey and Millsy, and we had incredible chemistry right from the get-go. I just had a different feeling coming to the rink each day. I was rejuvenated. Obviously, everything got flipped upside down when the season shut down due to the pandemic, but I felt a real connection to the city. [My wife] Cat and I both did.”

In the end, Toffoli called it “disappointing” that he never received a contract offer from the Canucks. It was disappointing for Canucks fans too.

Toffoli ended up signing a bargain deal on the fourth day of free agency — a four-year deal worth $4.25 million.

“I got hurt in the bubble, and the series against Vegas didn’t quite go our way last summer, but it seemed like the start of something special out there. And I just felt like I really fit in with that group off the ice. Everything was easy,” he said.

“That’s why I wanted to come back to Vancouver. I could have seen myself finishing out my career there. But hockey is a business; I understand that. And at the end of the day, there was no offer from the Canucks’ end, so we had to go another direction. It was disappointing, but I knew that there was going to be a team out there that wanted me and saw me for the player I know I am.”

It was a bold move to acquire Toffoli last season, as Jim Benning mortgaged some future assets in prospect Tyler Madden and a second-round pick to get a player on an expiring contract.

The question was always whether the Canucks could re-sign him, given the team also had two UFAs like Jacob Markstrom and Chris Tanev. The salary cap didn’t rise as expected due to the pandemic, but Toffoli also signed for less than he would have in a normal year.

Jake Virtanen was re-signed at a $2.55 million cap hit. Had the team moved on from him and found a way to shave off an additional $1.7 million of salary, that would have added up to Toffoli’s current cap hit.

In the end, it’s a bad look for Benning, who has added a bushel full of bad contracts during his tenure that is now affecting the product the Canucks put on the ice.