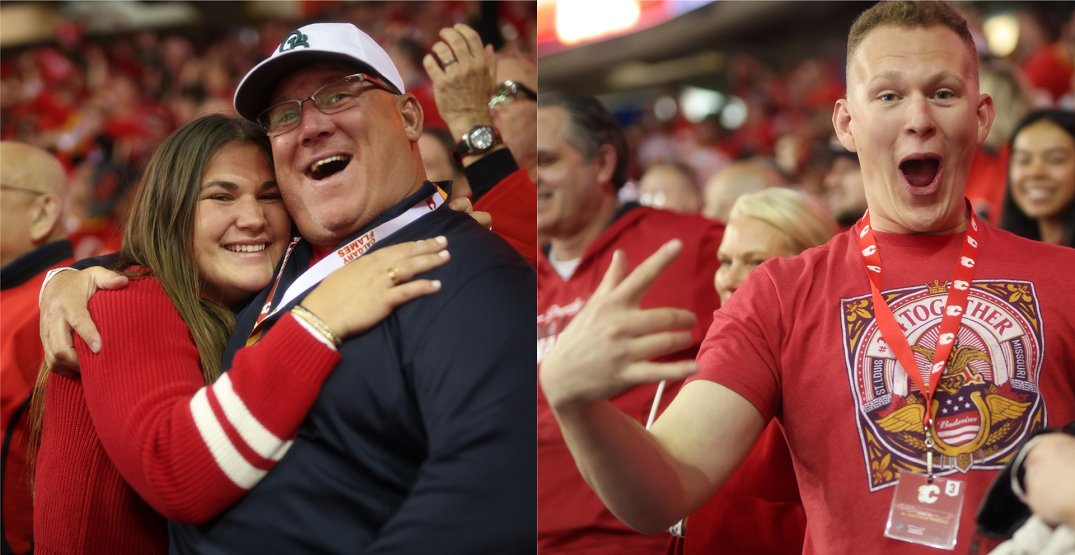 There are not too many people more supportive than the Tkachuk family.

Sure, Calgary Flames forward Matthew Tkachuk might have scored a hat trick in one of the wildest playoff hockey games you’ll ever see, with his team coming out on top of a 9-6 victory over the Edmonton Oilers on Wednesday night.

But it was his family members in attendance: brother Brady, sister Taryn, and dad Keith that were making all the headlines for their crowd support.

The Tkachuk’s are as athletic as a family you’ll find: Brady is the captain of the Ottawa Senators, Keith spent 18 seasons playing in the NHL for the Coyotes, Blues, and Thrashers, and Taryn just wrapped up her freshman season playing field hockey at the University of Virginia.

What’s better? Three goals from Matthew, or three Bud Lights, with two in each of Brady’s back pockets?

If Brady Tkachuk is drinking a beer for each goal scored in Game 1, he may need to find a few more pockets 👀 #BattleOfAlberta #EDMxCGY pic.twitter.com/tX3j83163f

The family got real fired up when Matthew netted his third goal of the night:

No one had a better night on this planet than Brady Tkachuk, that’s a fact pic.twitter.com/drPMgNKzR5

A Matthew Tkachuk hatty has Brady fired up! You know he was heckling that Oilers fan in the back. pic.twitter.com/CaVJ7t29Up

But unlike several hundred fans in attendance, Keith wouldn’t throw his hat on the ice for his son.

As for his brother, Matthew said he was “crushing it” right now.

But what if the roles were reversed? What if Brady was in the playoffs, and Matthew was cheering from the crowd?

“We’ve actually been talking about that,” the younger Tkachuk told ESPN before the game. “So I think we’re calling it the ‘shenanigans’ I’ve been pulling. Don’t think he could match all that stuff, but I think he’d be as excited as ever.”

Brady Tkachuk says Matthew couldn't match his "shenanigans" if roles were reversed with #Flames out and #Senators in the playoffs.

“Don't think he could match all that all that stuff, but I think he'd be as excited as ever." https://t.co/ZwlA6ilDw6 pic.twitter.com/4bXm9WGWbf

Brady added in that interview that he’s leaving Calgary on Saturday and is not sure when he’ll be back. So make sure you soak in the Tkachuk family content while you can.