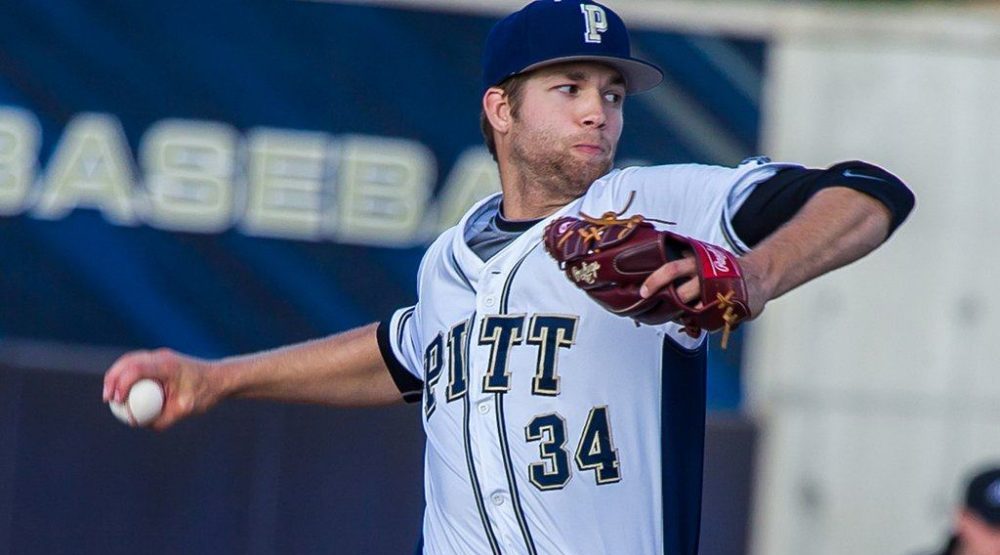 For baseball fans in Vancouver who like to see top prospects, along with their fireworks and three foot long hotdogs, the six-year affiliation between the Toronto Blue Jays and hometown Canadians has been fruitful.

Over the six rule-5 amateur drafts within that period, the Jays – and I’m including all the supplemental 1st round picks here – have had 15 first round picks. Of those 15, nine have spent time at the Nat. Not a bad hit rate considering two of those picks didn’t sign.

The latest to make his way north is the 21st overall pick from this past June, T.J. Zeuch.

Drafted out of the University of Pittsburgh, the 6’7″ righty made his professional debut last week, pitching three innings for the Gulf Coast League Jays. It’s tough to read much in three innings, but hey, a good start is a good start and the 20-year-old was perfect, setting down all nine hitters he faced via seven ground-outs and two punch-outs.

Zeuch uses his height well, creating impressive downward plane on his fastball. The report I received from his start in Florida said he threw almost exclusively fastballs. They sat in the 92-94 mph range with good, late movement. Mix in – and I’m going with what I’ve read here – two breaking balls (a slider and curve) that should be at least average offerings, and Zeuch has the tools to stick as a starter.

Of course, pitchers with long levers do sometimes struggle to repeat their mechanics – something the Jays organization will look keep an eye on, with the first set belonging to C’s pitching coach Willie Collazo.

Zeuch’s first chance to take the hill for the C’s will be tonight in Boise, which actually comes at a great time for Vancouver. After Thursday’s 7-1 mauling at the hands of the Hawks and last night’s heart-breaking loss in 10 innings, Vancouver sits one game back of the (Turtle) North Division leading Tri-City Dust Devils, with 10 games remaining in the Northwest League’s first half.

So far, the C’s starting pitching staff, aside from Justin Maese, has been pretty ordinary. Zeuch’s two starts prior to the end of the first half should provide a boost.

Zeuch’s promotion is at the expense of the aforementioned Maese whose five excellent starts – where he walked only one hitter!! – in Vancouver has earned him a promotion to the Midwest League Lansing Lugnuts. The timing seems odd given fact the C’s are jockeying for a playoff position and the Lugs have only just begun their second half. But you have to remember, when you cover (and are a fan) minor league baseball that development takes priority.

Playoffs are an added, albeit less important, bonus.

From now on I’ll be referring to Zeuch and Zach as ZZ Pop — get it, they’ll be ‘popping’ the mitt.

I’ll see myself out….