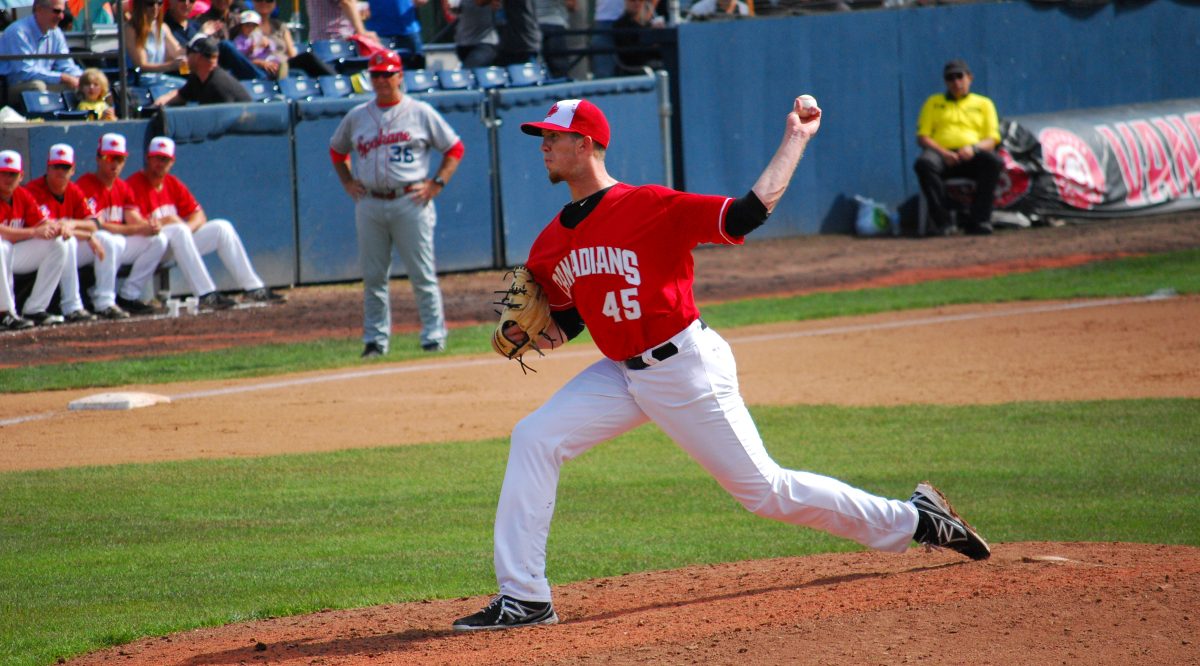 The Vancouver Canadians introduced their 2016 roster of players and coaches under grey skies on Monday. Hopefully not a harbinger of things to come.

Those players open their season on Friday, with a three-game set away to Spokane before returning home to open up the Nat on Monday against the arch rival Everett Aquasox.

Since becoming the Blue Jays single-A affiliate in 2011, Vancouver fans have been spoiled with success. The C’s made the playoffs for the first four years of the relationship, bringing home three Northwest League titles in the process. Last year the results weren’t there on the field but that didn’t stop people flocking to the revamped Scotiabank Field at Nat Bailey Stadium, with a league-leading 215,535 fans hitting the turnstiles.

Now, I’m fully aware that not all of those 215 odd thousand are as keen on the prospects as I am but that won’t stop me from slipping in a few prospecty notes in my top-five things to watch out for this season.

After 2015’s water ban wiped out all but a couple of the planned fireworks extravaganzas, the C’s brass hoped to beat any potential bans by front-loading their fireworks schedule for 2016. A dry April meant for early water restrictions but a wet May/June should mean those planned pyrotechnics get off the ground. Of course, with some of the rain we’ve been having they may not be able to play the baseball but those are mere details.

2. We should get the opportunity to see the ‘Tower’ TJ Zeuch

With the 21st pick in the #MLBDraft, the @BlueJays have selected RHP T.J. Zeuch from the Univ. of Pittsburgh! pic.twitter.com/ru5YquZGcj

From 2012 through 2015 the Jays selected four college players in the first round of the MLB Draft. Three of those draftees, Marcus Stroman, Max Pentecost, and Jon Harris, spent time in Vancouver shortly after inking their first professional contract.

Providing he signs – and nothing indicates otherwise – the 2016 first rounder (24th overall) should continue that trend. Measuring in at 6’7″, the Tower will be the tallest pitcher to grace the Nat since Matt Smoral was here in 2014.

There are couple of pitchers on the roster that C’s fans will recognize. Evan Smith and Daniel Lietz are two of them, but one that stands head and shoulders above the rest (literally) is the aforementioned Smoral.

After being drafted in the supplemental round (50th overall) of the 2012 Draft, the Ohio native was given two million bucks to sign on the dotted line despite hardly pitching, due to injury, during his senior year of high school.

I saw him during his last tour with Vancouver and came away so impressed that I wrote about him as a potential breakout prospect in 2015. Unfortunately an injury in spring training delayed his start and things never really got on track from there. He was eventually sent to Dunedin as a bullpen piece where, after 3+ terrible innings he was re-assigned to rookie level Bluefield. And then, as if things weren’t going poorly enough, a line drive to the head ended his season early.

I’m not really certain what to expect in this go around but as I’ve said repeatedly in the past, you can’t give up on tall, power lefties prematurely.

4. Don’t fall in love with the Opening Day lineup

In 2013, Jason Leblebijian, who has just made his debut in AA New Hampshire, was in Vancouver for all of five games to start the season. I believe Toronto felt that Vancouver needed a veteran presence (to keep the kids out of the Roxy?) for the first week of the season.

Whatever the reason, the roster we see on Opening Day is generally far removed from what we see over the next month or two. Of the Jays 41 draft picks this year, 24 came from various colleges. A good chunk of those should filter through to the Nat over the next few weeks.

Aside from Zeuch, we may also see Zach:

I can’t believe I’m going to say this but I fully expect to see Vladimir Guerrero Jr. in a C’s uniform at some point this season. At just 17 and with zero professional games under his belt, the usual path for someone signing out of the Dominican would be a start in one of the complex leagues before maybe finishing the season in Bluefield. Think Franklin Barreto circa 2013.

By all accounts though, Vlady Jr is an exceptional case. With huge natural power, could Guerrero be the first to blast one over the Hey Y’All porch?

So sit back, grab a three-foot-long hotdog, a frosty beverage or two, and enjoy what should be an excellent season of baseball (and, fingers crossed, fireworks) at the Nat.