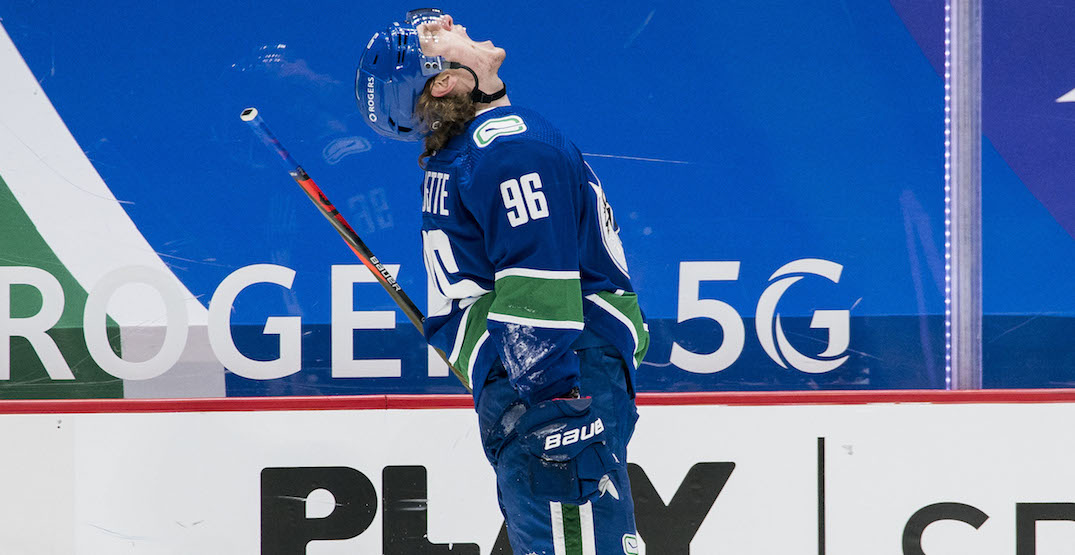 With just 19 games left, the playoffs have become nothing but a pipe dream for the Vancouver Canucks.

They’re only two points back of the Montreal Canadiens for the final playoff spot in the North Division, but the Habs have a whopping six games in hand. The next closest team to catch is the Edmonton Oilers, who are seven points up on Vancouver, with three games in hand.

That’s a lot of ground to make up, and the Canucks haven’t got much time to do it. Put more bluntly, analytics website MoneyPuck.com currently lists the Canucks’ odds of making the playoffs at 3.2%.

After a week off, the Canucks will have just six games remaining before the April 12 NHL trade deadline. The team can continue to “live day-to-day” as Jim Benning suggested during his press conference earlier this month, but to do so would be the equivalent of living in Fantasyland.

This Canucks team isn’t better than their record suggests. They’ve played better since January, when they leaked shots and goals at alarming rates, but that’s a low bar. Their turnaround in March was due in large part because of the outstanding play of Thatcher Demko. That’s great news for the Canucks’ goaltending future, but telling for where the rest of the team is at.

Plain and simple, the team isn’t good enough to even compete for a playoff spot this season, so it’s time to stop pretending they are.

That doesn’t mean the players shouldn’t try their best to win games, and you can’t fault the coaching staff for doing all they can to cling to their slim playoff chances. Players, and to a lesser extent, coaches, really do have to “live day-to-day.”

But management can’t live day-to-day. Benning has admitted that his team won’t be ready to become a credible Stanley Cup contender for another two years — after many regrettable contracts expire.

Winning a Stanley Cup is really hard, and it will require more than waiting for draft picks to develop and $3 million fourth-liners to go away. As the GM of an NHL team, Benning needs to have a wider lens. He needs to plan ahead, gearing all of his moves for two years from now.

Michael DiPietro hasn’t played a competitive game in 380 days, as the Canucks continue to let their top goaltending prospect rot on the taxi squad as injury insurance. The 21-year-old needs to play games, and he’s quickly running out of time this season.

It’s long past time to send DiPietro to Utica and find any other goalie to sit and wait as insurance. Even if you still want to do everything you can to make the playoffs, the Canucks already need Vezina calibre goaltending from Demko to have a prayer. If Demko and Holtby get hurt, their season will be shot no matter who steps in off the taxi squad.

Another player slowly rotting away at the moment is Olli Juolevi. Currently on the taxi squad, the 22-year-old former first-round pick is healthy but hasn’t played a game in over a month, since Travis Hamonic returned to the lineup.

Juolevi has appeared in just 15 games this season, showing some potential, but in a highly-sheltered role, playing just 13:12 per game. Only a few weeks away from his 23rd birthday, the Canucks still don’t really know what they have in Juolevi, and at this point, it makes sense to find out.

Adam Gaudette has played most nights this season, but he’s been used very sparingly. The 24-year-old ranks 13th among Canucks forwards in average ice time (10:54), playing more on the wing than at centre, due to an apparent lack of trust in the defensive zone.

The decision to shy away from leaning on Juolevi and Gaudette is understandable, from Travis Green’s perspective. He’s paid to win hockey games, and particularly given the fact that he doesn’t have a contract beyond this year, he needs to play the players he believes will give him the best chance to do that.

So Green is justified in choosing players like Jordie Benn and Travis Hamonic over Juolevi, and Brandon Sutter and Jay Beagle at centre instead of Gaudette.

If you’re taking it day-by-day, that makes perfect sense.

But from a management perspective, it’s decision time. Have they given up on Juolevi and Gaudette? If not, they need to play more meaningful minutes.

If we’re looking at Benning’s two-year timeline, players like Hamonic, Benn, Sutter, and Beagle aren’t likely to be in Vancouver anymore. The way things are going, maybe Juolevi and Gaudette won’t either, and if the Canucks were a playoff team, that would be the cost of doing business.

But the Canucks aren’t a playoff team this season, so they can afford to prioritize development. It probably necessitates trading depth pieces like Sutter and Benn, but realistically, it’s in the team’s best interest to recoup value for them anyway.