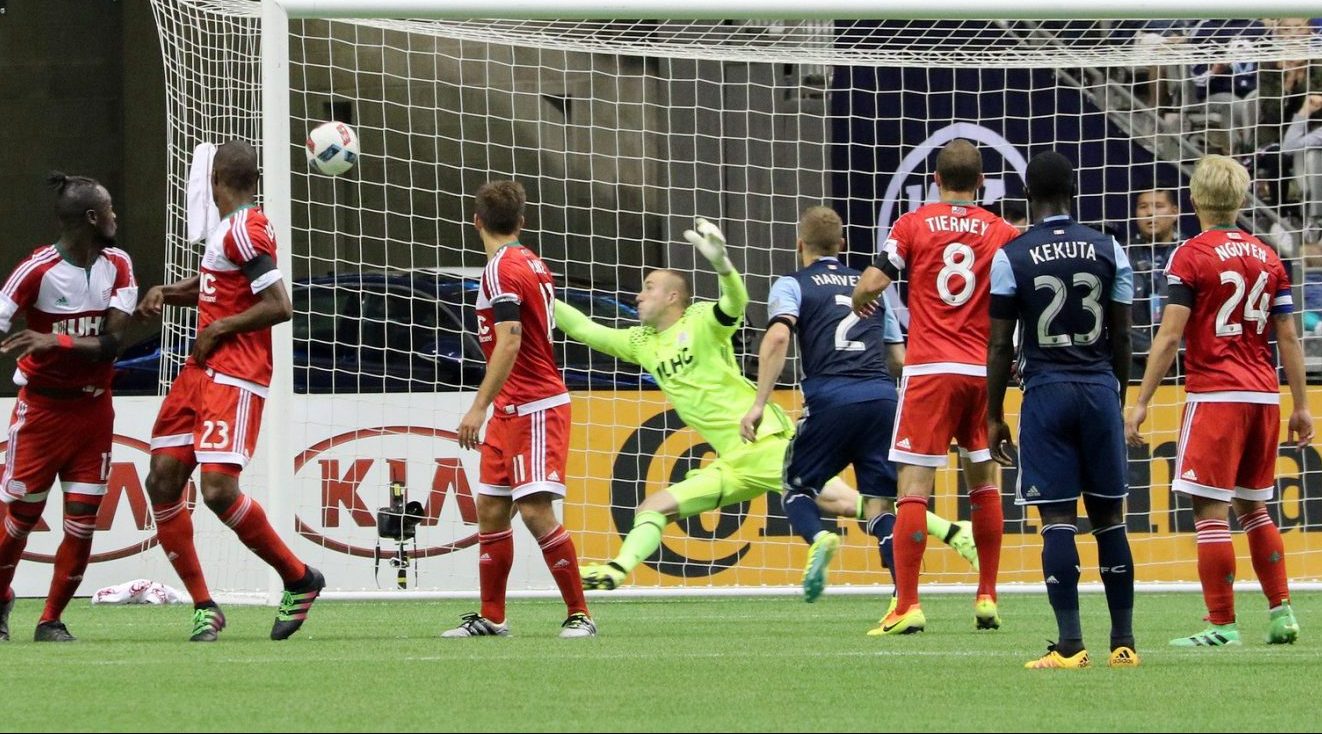 Isn’t international soccer grand? The best of the best representing their countries, putting on a show, disrupting the North American domestic season… such fun. Or, y’know, the opposite of that.

The Vancouver Whitecaps looked every bit the club knocked out of their rhythm and struggling to shake off rust against the visiting New England Revolution on Saturday night. As a result, crucial points in the razor-thin Western Conference were thrown away in a 2-1 loss at BC Place.

It’s strange how sometimes you just happen to make multiple moves with the same team. I’m sure there’s no intentional grand plan to re-create Vancouver out east, yet there they were: Tom Soehn on the sidelines as a coach, Brad Knighton in goal, Daigo Kobayashi in midfield, Lee Nguyen beside him, and Kei Kamara leading the line.

All right, technically, Nguyen never saw the pitch for Vancouver. Arguably his biggest impact was a homophobic tweet which preceded what I’m sure was an entirely coincidental exit from the Whitecaps. As for Kamara, I’m being tongue-in-cheek here after all the hullabaloo that surrounded his almost-to-Vancouver trade.

The point is, you see that motivation spike for wanting to show up your old team all the time in professional sports. There’s a reason Pa Modou Kah keeps seeing time in away matches to Portland, for example. For Vancouver, seeing that many hostile parts working together surely can’t be a good thing. On this night, it certainly wasn’t.

Not that long ago, our Jorge Mendoza spoke to striker Octavio Rivero for a feature article here on Daily Hive.

After that article went up, Rivero began scoring. Fast forward to Jorge’s latest feature with Nicolás Mezquida and, lo and behold, Mezquida put Vancouver on the board in this match with a beautiful free kick to make it 1-1.

It’s clear there’s some sort of “Mendoza Effect” in play here. With that in mind, maybe Jorge should speak to Erik Hurtado next. Hurtado played the holding forward role we’ve seen Rivero in and, while he emulated the defensive and set-up abilities of the Designated Player, his finishing was not exactly highlight reel material.

Hurtado managed to blow chance after chance, including a golden opportunity where he managed to flick a ball past Knighton but the spin sent it away from, not towards, the goal. This is not the finish that gets you an extended run in the starting lineup once the latest round of suspensions have been served.

It’s a shame, too, because Hurtado, Mezquida and Kekuta Manneh did some beautiful things on the left-hand side of the pitch. There was a clear chemistry on display, with speed, passing and crosses butchering the New England defence all afternoon.

Unfortunately, build-up counts for squat when you don’t finish your chances.

On Wednesday, New England were taken to extra time by a resilient Carolina RailHawks squad in the US Open Cup before a 103rd-minute goal punched the Revs’ ticket to the next round. That’s a full 120 minutes of competitive action, though you’d be hard-pressed to see any negative impact it had on the contest.

Then again, maybe it never had a chance to. As I was preparing to let fly with a scathing condemnation of letting a weakened team off the hook, I noted this passage from the MLSSoccer.com recap:

The teams played the first nine minutes of the game before a lightning delay of 2 hours, 15 minutes…

Oh, well then, my mistake. It was only 111 minutes of uninterrupted soccer. That’s nothing in the modern game. Carry on, then. Meanwhile, I need to get some ice for my poor cheek owing to how hard I’m cramming my tongue into it.

The Whitecaps had a ten-day break to rest after they comprehensively took down Ottawa in their Voyageurs Cup semifinal. The Revolution had less than three days to recover from a narrow win and a cross-country journey. There is zero excuse for the ‘Caps not being sharp enough, fit enough, prepared enough or any other metric you want to use when it comes to seeing out what should be three points at home.

“The performance was excellent, I just said to the guys in there,” said Robinson in the post-game press conference. “The result is disappointing. I’ve got a disappointed bunch of players in there. I think we didn’t get what we deserved today. I think we deserved to win the game, but it’s what you do in both boxes.”

Free Kick: How not to defend

WHYYYYYYYYYYYYYYY ARE YOU ALL BACKING AWAY AND GIVING KELYN ROWE ACRES OF TIME AND SPACE, AAAAAARRRGGGGHHH