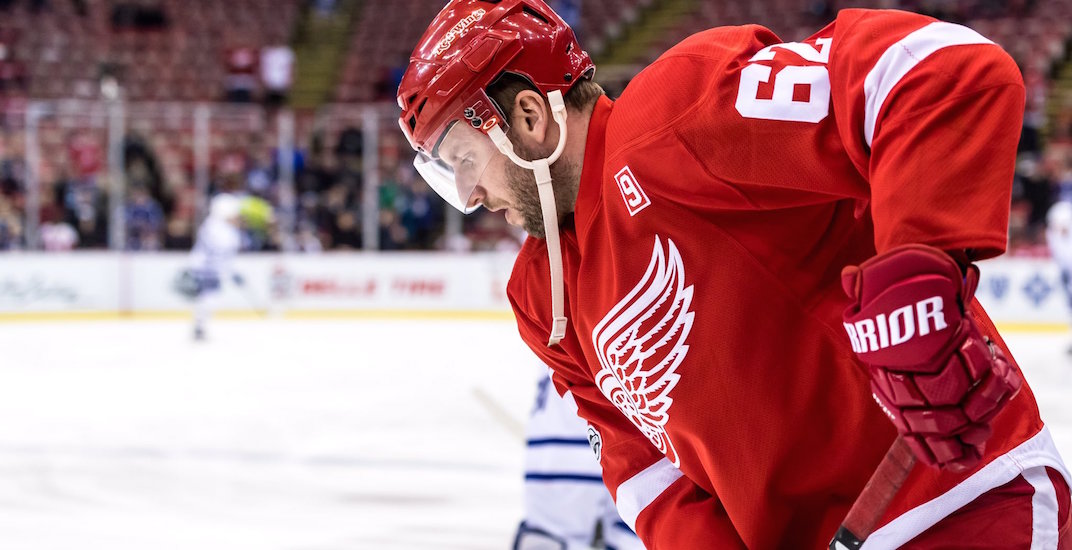 As with most off-season moves in Vancouver, the Canucks signing of Thomas Vanek was met with a variety of strong reactions from the bleachers.

At first glance it looks like a low key move. The Canucks are simply signing a veteran player to a one-year deal, someone who can come in and provide some offence to a team that was clearly struggling to produce last year. This was a team that at one point struggled to get a shot on net in a period, much less a goal. And on paper, it’s hard to deny that seeing the 48 points Vanek put up last year looks a lot nicer on the roster sheet than the eight points Jayson Megna put up.

Remember that pit of despair and sadness that would form in your stomach when Willie D would trot Megna out on the power-play with the Sedins? Vanek is a goal scorer, and a right handed shot. He is much better suited for that power play role than many of the options used last year. He also clearly fits the annual tradition of “bring in a new guy to play with the Twins” that we hold so dear here in the ‘Couve.

Thomas Vanek's #canucks deal does not include any no-trade protection. He'll be a moveable asset at the trade deadline.

It’s also a savvy move for the trade deadline next year. If the Canucks are struggling to make the playoffs, they can flip Vanek in the annual “Trade Vanek to a playoff team and watch his production drop” tradition the NHL holds so dear. It’s the kind of move many in Vancouver were hoping they would pull off with Radim Vrbata, moves many rebuilding teams use to leverage ‘free’ draft picks by dealing short term free agents to playoff teams.

If you’re an intangible kind of guy or gal, then this move also pays off by bringing in an NHL veteran. Someone who can help bring leadership and a veteran presence to the locker room, an area the team lost a step in with the trades of Alex Burrows and Jannik Hansen last season.

The 33-year-old can be the guy who teaches Brock Boeser how to keep his hair gel in place even under his hockey helmet. The kind of tips only veterans know after years of playing in the NHL.

That being said, the reason there is some dissent amongst Canucks Nation is because it once again makes people wonder how committed the Canucks are to a youth movement.

Boeser, Jonathan Dahlen, Olli Juolevi, Nikolay Goldobin, Jake Virtanen, Brendan Gaunce, and Reid Boucher are just some of the young men that will be trying to prove they deserve a spot on the Canucks. Now, how close some of them are to making the team is up for debate.

But the fact the Canucks have signed Sam Gagner, Alexander Burmistrov, Michael Del Zotto, Patrick Weircoch, and now Vanek, has made the path to making the team a lot harder. Ten of the 12 forward spots are pretty much locked up, and that doesn’t take into account Derek Dorsett’s status, who at $2.5 million, is most likely going to get a spot if his injury from last year doesn’t hold him back.

33 year old Thomas Vanek signs a 1 year deal with the Canucks?
Only one response…WTF!#rebuild?

There is also the fear that the Canucks are still trying to sneak their way into the playoffs and into short term success over the idea of long term goals, ie. a first round exit next year, versus a deep playoff run several seasons later. The word ‘rebuild’ became so contentious last year, it go to the point that everyone was waiting to see if Trevor Linden could even physically say the words. He ducked the word like it was dodgeball, to the point where it became sort of a sick game to see if we could somehow manage to make him say it.

The fear is that instead of letting young kids learn on the job and showing the team what they can do, the Canucks are bringing in a bunch of veterans to prop up the team, and “see what happens.”

Maybe they don’t trade Vanek or Gagner at the deadline because they’re six points out of the playoff race. Maybe the Canucks try for the playoffs next season and miss them, and the Canucks have nothing to show for their soon to be free agents.

The biggest point of contention, though, is probably the one that has a young player losing a potential spot on the team. Now, there is the idea that you earn your spot, and that being a good player supersedes your contract and age. But you would forgive Canucks fans for being a bit leery of that after watching Coach Willie play favourites the last couple of seasons (granted he’s gone now, but he left a lasting impression). Boucher would score a goal last year then get benched the next game while we all watched Megna get 15 minutes and power play time and produce nothing.

It would also be a big blow to fan excitement if Brock Boeser had a great preseason but still started the year in Utica because they’re paying Vanek more money. Hell, the NHL is hyping up Boeser as a potential rookie of the year contender, so it’s easy to understand why it would be seen as a letdown if he didn’t get a spot on the roster on opening day. In a city where there hasn’t been a lot to cheer for lately, even a potential chance of having a top ranked rookie is a pretty big deal here.

The thing is, though, there is no magical formula for when a player should be in the AHL versus when he should make the leap to the NHL.

For every mismanaged “they played him too early!!!” Gilbert Brule war cry, there is a “the kid learned on the job!!!” Bo Horvat. If the NHL knew when to play kids in the pros versus putting them in the minors, we would have no more busts. The reality of the situation is that nobody can 100% claim that starting a lot of the young kids in Utica is a bad thing.

The problem with it is, is the excitement level.

The idea of watching a young team coming together is the shining beacon of hope for teams that finish in the basement. They are the lifeblood of ticket sales and ratings. Remember after the dark years of Mark Messier? When the West Coast Express was just starting to come together? That is the kind of thing fans in Vancouver are dying for. No one is suggesting Boeser, Horvat, Goldobin, etc. are the coming of the next big era in Vancouver, but there is hope that they are the next playoff bound team with a chance to win the Cup.

But it’s also a deal that might make the Utica Comets the most intriguing team for Canucks fans next season.