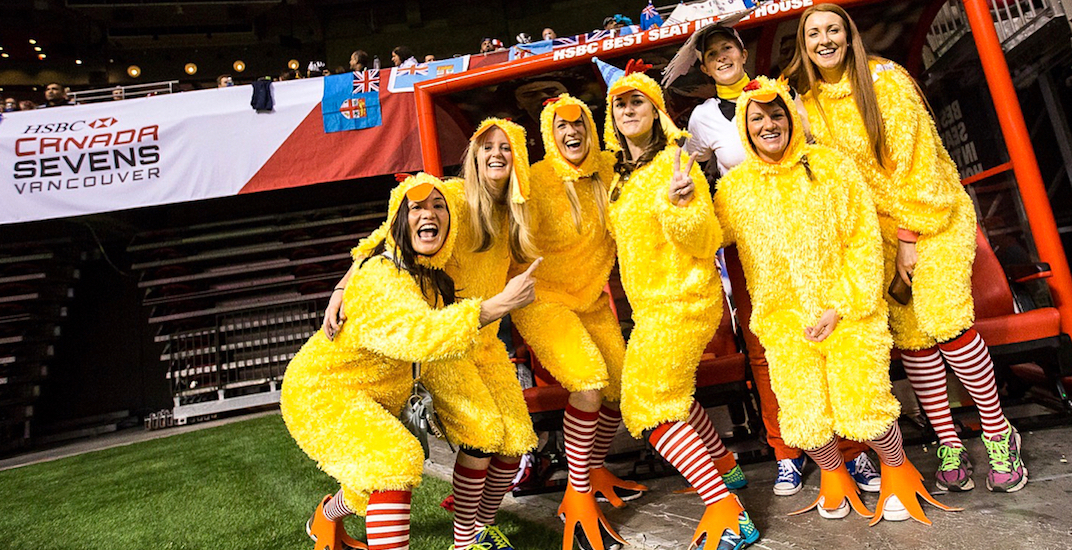 Rugby sevens is getting ready to take over Vancouver for the sixth year in a row.

The annual Canada Sevens tournament was delayed from its usual weekend in March, but the 2021 tournament will indeed go ahead this weekend. Sevens was one of the last major events held in Vancouver before the pandemic, and it will be one of the first in 2021.

There will be some differences, but many things will stay the same — and that’s good news for fans attending the festivities at BC Place this weekend.

1. Yes, there will still be whacky costumes

You might need to incorporate a mask into your costume this year, but fans will be showing up in “fancy dress” all the same.

Sevens’ unique culture includes dressing up like it’s Halloween, which only adds to the party atmosphere. Vancouver has embraced this part of Canada Sevens in the past, and they expect it to continue.

After all, you’ve got to go all out to land on Daily Hive’s prestigious “best dressed” list, right?

Canada Sevens will be the first major sporting event in British Columbia to limit attendance to vaccinated fans only. As part of the provincial health order, fans that are 12+ years of age will need to show proof of vaccination (beginning with at least one dose) to enter BC Place.

Everyone 12+ will need to wear a mask at all times during the event unless they are eating or drinking at assigned seats. Fans must enter through specific gates based on the location of their seats and are not permitted to linger in the concourse.

Other health and safety rules include capping attendance at 50% of lower bowl capacity, allowing fans to be spaced out. BC Place staff has also enhanced its cleaning protocols, and hand sanitizer is being offered throughout the stadium.

Twelve countries will be competing at this year’s tournament, including:

New this year is a “fast four” women’s tournament, featuring Canada, USA, Great Britain, and Mexico. Canada won bronze at the 2016 Olympics in women’s rugby sevens and finished ninth this summer in Tokyo.

This sport is a grind for players, and also for fans. Saturday’s action begins at 9:44 am, with the final match scheduled for 6:33 pm. Sunday’s games begin at 9:20 am, with the championship match set for 5:28 pm.

The all-day aspect makes for a festival-like atmosphere in the stadium. Check out the full detailed schedule on the Canada Sevens website.

Sevens is the fast-paced, high-scoring cousin of traditional rugby.

Games begin and end in about 20 minutes in real time, which is great if you have a short attention span. Each half lasts only seven minutes, and there are just seven players on the field per team.

Scoring is similar to traditional rugby, though points can only come from tries (5 points) and conversions (2 points).

In a sport as rugged as this one, new rugby sevens fans will likely be surprised by the sportsmanship displayed by the players.

Competition is fierce, but respect for one another is high. Games are played with intensity and toughness, but you’re not likely to see much pushing and shoving when the play is over, nor should you expect to see players arguing with the referees.