While many of us whip up a New Year’s resolution during the final days of the year, Jim Benning’s goal for 2020 became evident back in June.

When the Canucks general manager traded a conditional first-round pick for J.T. Miller, he made it evident that he believed this team should make the playoffs. Now, Benning has been making “win-now” moves for years, but for the first time since his first year on the job, the team he’s assembled actually has a reasonable chance of qualifying for the playoffs.

Friedman: “Don’t look now, but if Vancouver beats Chicago on Thursday, the Golden Knights need four points in their next two games to prevent Travis Green from being the Pacific Division’s All-Star coach. Wasn’t he getting fired last week?” #Canucks

After securing five straight wins, the Canucks are not only in a playoff spot, they’re within striking distance of first in the Pacific Division. 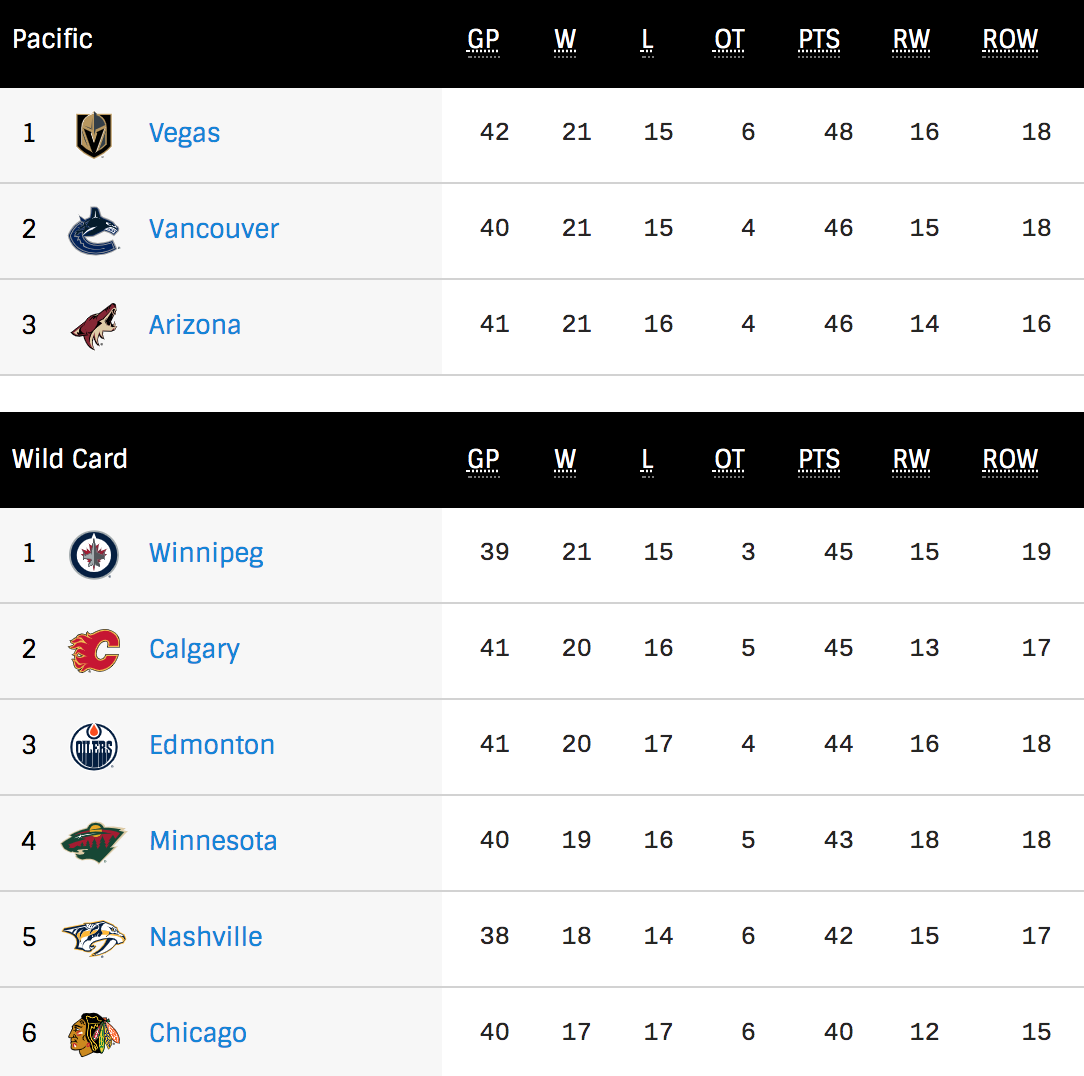 The Canucks currently sit in second place in the Pacific Division (NHL.com)

Here are five things that need to happen if this team is going to make the playoffs after 82 games.

Arguably the Canucks’ biggest strength is their ability to put the puck in the net.

The stars have been producing, the power play is clicking, and depth guys such as Jake Virtanen, Tanner Pearson, (the now injured) Josh Leivo, Adam Gaudette, and Antoine Roussel have provided secondary scoring. 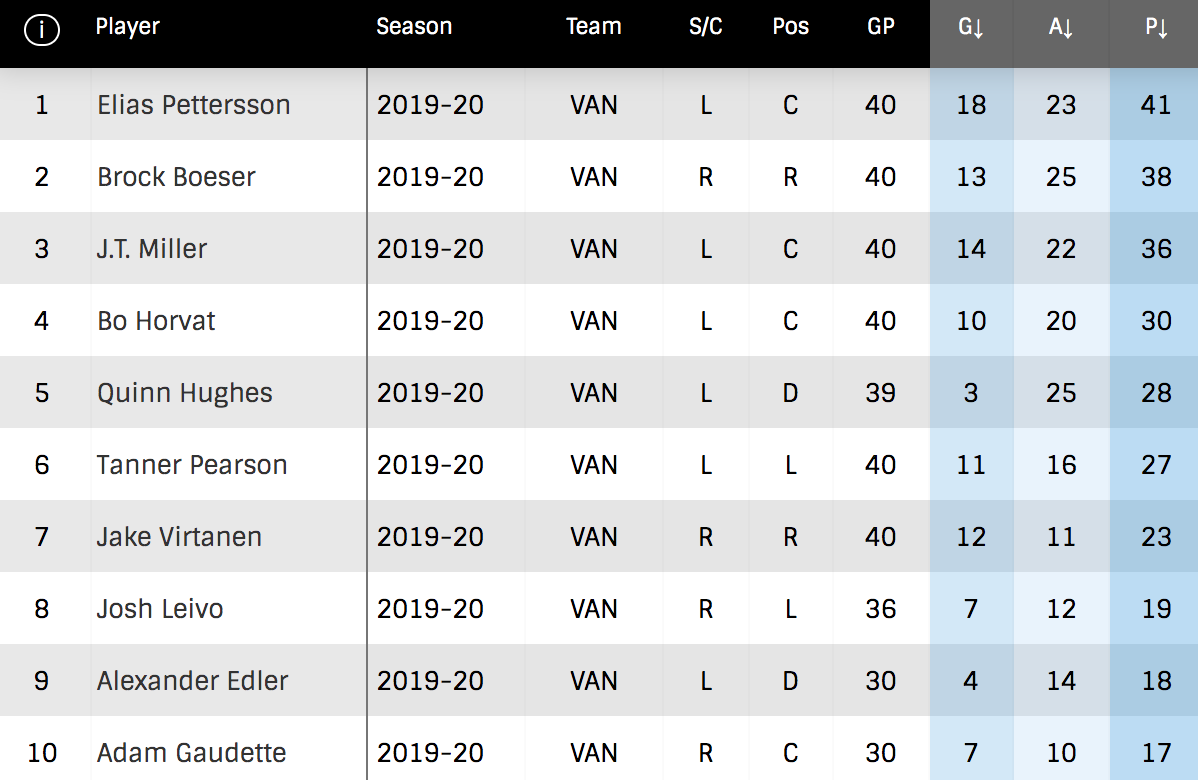 The top 10 scorers on the Canucks after 40 games (NHL.com)

The Canucks are currently third in goals per game among Western Conference teams, behind only the Colorado Avalanche and Nashville Predators.

To make the playoffs, the Canucks probably have to finish the year top-10 in the league in goals, considering that their play away from the puck is a weakness.

I’m not sure how much improvement we can reasonably expect from the Canucks here, but you hope this group can be at least average. Right now, that’s not the case.

The Canucks are in the bottom third of the league in both shots against and scoring chances against at even-strength. Despite all the changes on defence, this is still a team that relies way too heavily on their goaltending.

Jordie Benn and Troy Stecher have seen their possession numbers plummet after a decent start. Same for Tyler Myers. If this group is going to start dominating possession as they did in October, at least two of those guys will need to step up.

You can check this box off for the Canucks as well.

Jacob Markstrom’s .919 save percentage is his best total during his three years as the number one guy in Vancouver. Despite questions about fatigue in Thatcher Demko’s absence, Markstrom has posted a sparkling .927 SV% over his last 10 games.

Demko’s save percentage has dropped to .905 on the season, but that doesn’t tell the whole story. His quality start percentage is 75%, which is among the league’s best marks — 53% is considered average, and anything over 60% is good (Markstrom is at 56.7% on the season).

The San Diego native had three bad games against the Buffalo Sabres, Pittsburgh Penguins, and Colorado Avalanche, but has looked good in every other start this year. His health is the main concern but his ability to perform well when called upon hasn’t been an issue.

After playing the Edmonton Oilers prior to Christmas, the Canucks will have 15 of their final 43 games against divisional opponents. In a Pacific Division where no one has grabbed the bull by the horns, it’s not farfetched to say that the Canucks need to win the majority of these games if they want to make the playoffs.

Their contests against Edmonton are wrapped up by Christmas, but here’s what’s left of the division:

The Canucks need to continue dominating in California as they did earlier in the season, and they need to pick up wins against the teams in front of them. We haven’t heard this much before, but those games against the Arizona Coyotes could be monumental. Three of those four games come after March 1 too.

This is something Canucks fans haven’t been used to, a (mostly) full stable of healthy bodies. That’s a rarity for most teams towards the end of the season, but the Canucks have been hit with a number of injuries early this season.

None of them have been crucial, other than the loss of Alex Edler. The concussion for Demko did put an unhealthy amount of work on Markstrom’s plate, but we’re still talking about the back-up goalie.

The Canucks will probably need all of Brock Boeser, Bo Horvat, Elias Pettersson, Miller, Hughes, and Markstrom to stay healthy if they want to make the playoffs. Depth injuries can be dealt with, but the Canucks are in trouble if any of those guys go down.

If the stars stay healthy, there’s a good chance that the combination of good goaltending and potent offence might just be good enough for the Canucks to sneak into the playoffs in 2020.