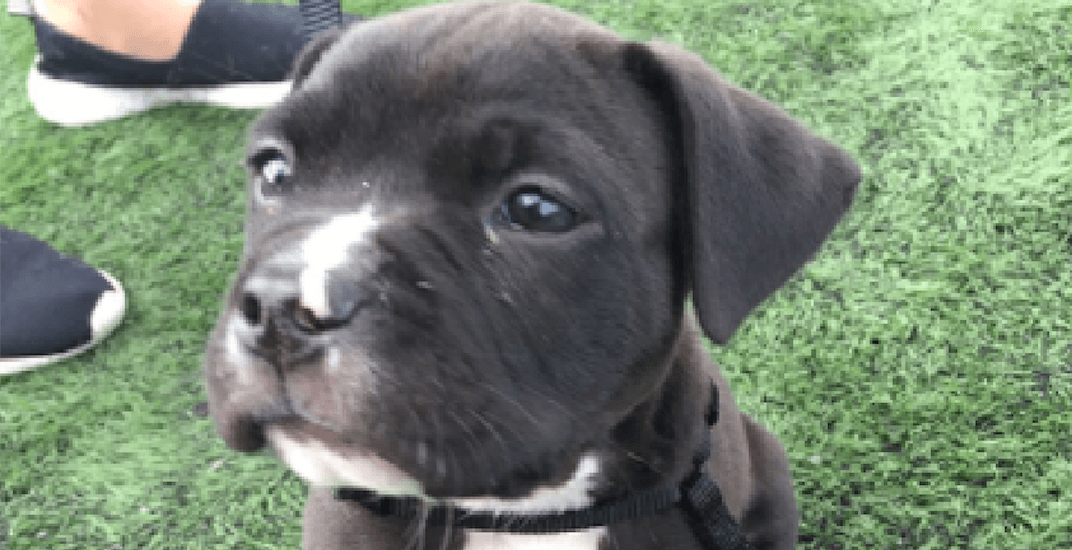 Thieves stole this dog, named Tank, and punched a woman in the face in Surrey recently. (Surrey RCMP)

Surrey RCMP are looking for two thieves after the pair allegedly stole a pitbull from a woman and punched her in the face recently.

In a release issued on Friday, police said that on September 28, at around 3 pm, police received reports that a woman’s eight-week-old puppy was stolen from her.

The owner, who had advertised the puppy for sale online, was contacted by a potential buyer and a meeting was arranged at Fleetwood Park near 80th Avenue and 160th Street.

Two men met the woman and one of them grabbed the puppy, named Tank, and “ran off”, police said.

The second man then allegedly grabbed the victim’s cell phone and punched her in the face.

The pair was last seen leaving in a car that was possibly a brown Toyota Tercel.

Now, police are turning to the public for help in tracking down the two suspects.

The suspects are both described as South Asian men in their 20s.

One suspect was wearing a black hoodie with Crooks and a picture of Monopoly’s Rich Uncle Pennybags on it. The second man was wearing a blue sweatshirt and pullover red hoody.

Tank is described as a black pit bull with white accents on his chest, feet, and chin. He has a very distinctive small white line that runs over his nose

In light of this event, police are reminding the public to take precaution when buying or selling items online.

Anyone with more information is asked to contact the Surrey RCMP at 604-599-0502, or to remain anonymous, call contact Crime Stoppers at 1-800-222-TIPS or leave a tip online at solvecrime.ca.