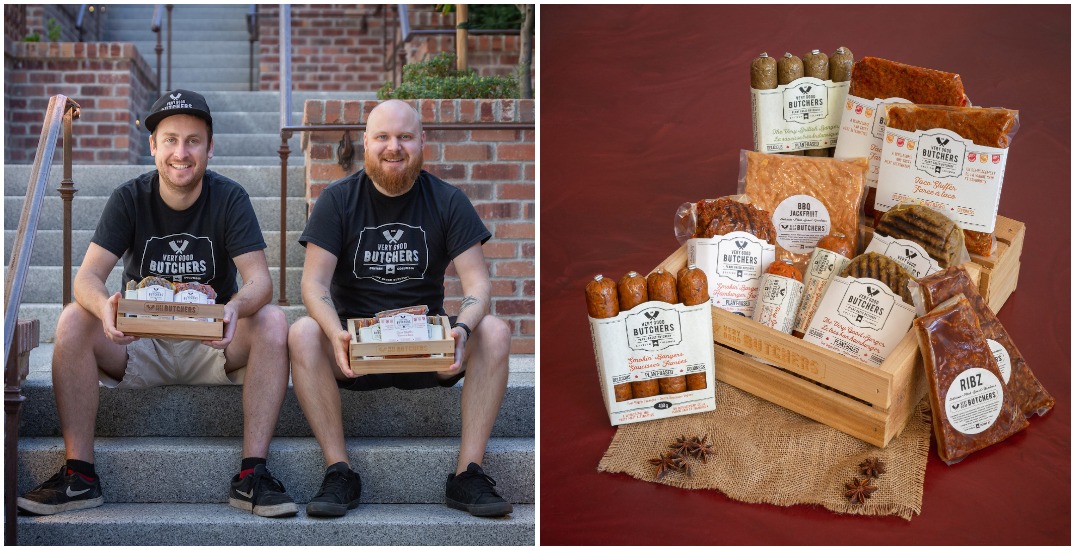 What started out as a conversation about veggie burgers at a family barbecue five years ago has grown to be a multimillion-dollar business today, called The Very Good Food Company.

Selling products under the names The Very Good Butchers and The Very Good Cheese Co., it sells more than a dozen plant-based meat alternatives and dairy-free cheeses — made of organic ingredients and spices you can pronounce and feel very good about.

The Very Good Food Company’s mission, it says online, “is to use progressive food technology to create plant-based meat and other food products that are delicious while maintaining a wholesome nutritional profile.”

It also adds that it believes in butchering beans, not animals.

In a phone interview with Daily Hive, CEO and co-founder Mitchell Scott says when he and co-founder (and also a chef) James Davison (whose wife’s brother is married to Scott’s sister) were at a family barbecue in the summer of 2016, Davison made the veggie burgers he made and sold at the farmers’ market on Denman Island and brought them for everyone to share.

“I grew up vegetarian,” Scott says, “I had a lot of not-so great veggie burgers. I tried his products… I was blown away… really just nailed it in terms of taste and texture.” 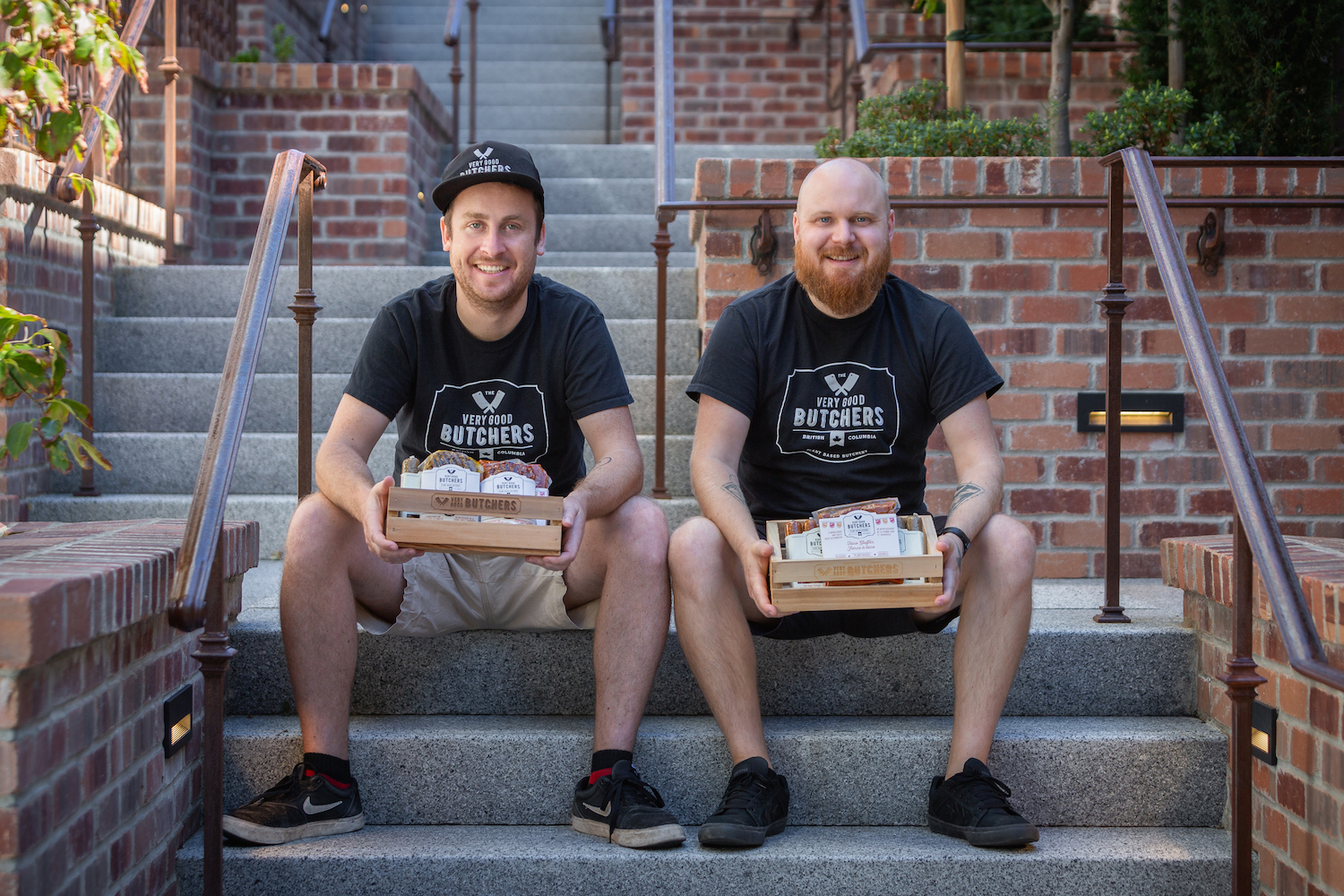 At the time, Scott was working remotely for a company in sales and marketing, but he was ready for something else. “We just got to chatting and decided to team up and see where we could take it.”

After a few months of selling products at local farmers’ markets, the pair shared on Facebook that they were taking their products to their first event, at a Christmas market in Victoria.

“We took our coolers of ‘meat’ up there, set up at a little six-foot table [and] had a great response,” selling out their stock. 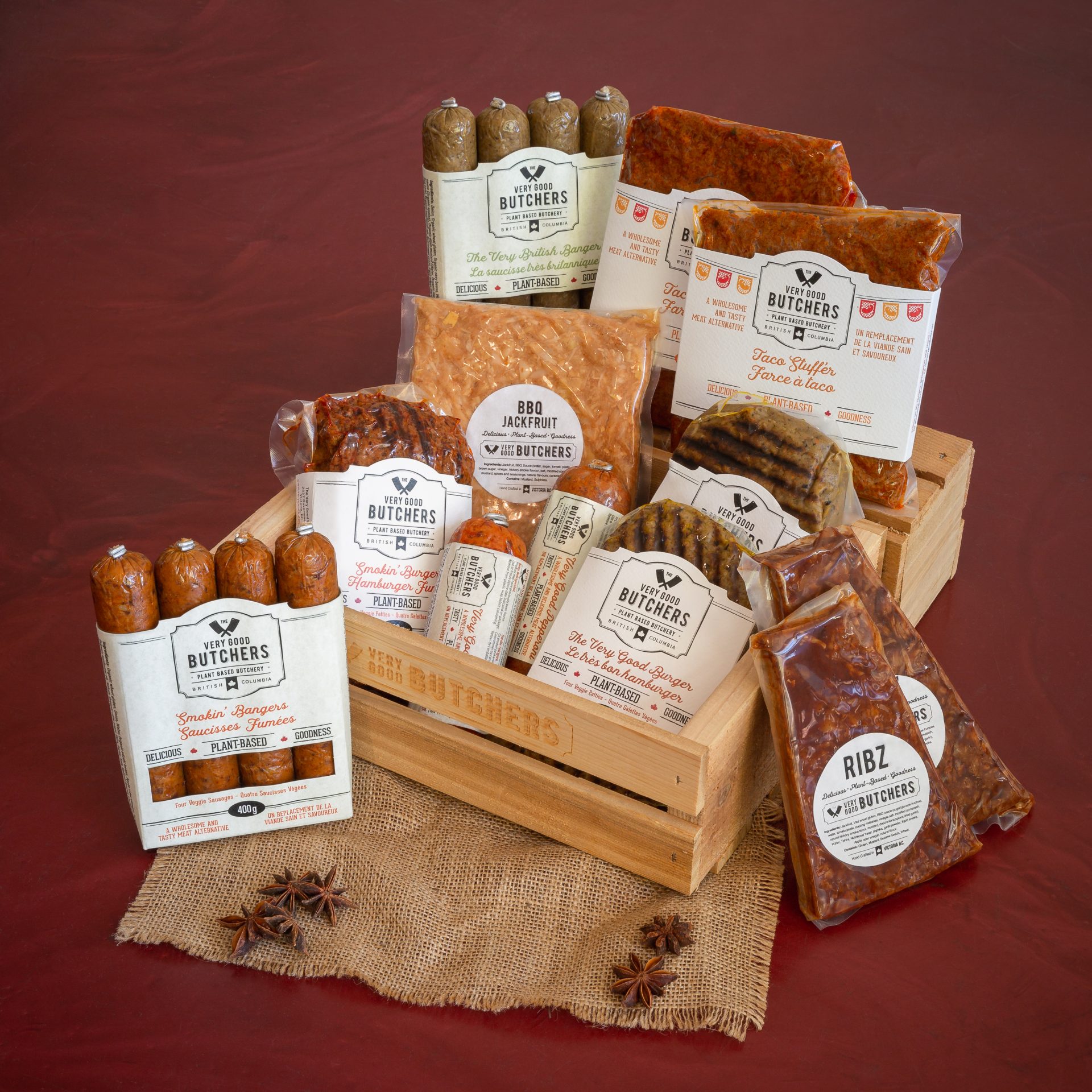 While Scott and Davison were at the market, they noticed a vacant retail space where they ended up opening up the first vegan butcher shop on the west coast in February 2017.

“We had about 1,000 people show up on our opening day and we had to shut down for a week after that just to restock everything,” Scott says.

After opening up the shop, they launched a Kickstarter campaign to raise money for a larger space.

The Very Good Butchers’ shop is just like any other traditional butcher shop. “We’ve got these big deli cases, we’ve got meats, cheeses, we’ll slice it up, serve it by the 100 grams.”

There is also a casual restaurant attached serving vegan comfort food such as burgers, mac and cheese, and poutine “to showcase products and show that plant-based eating is approachable and delicious.” 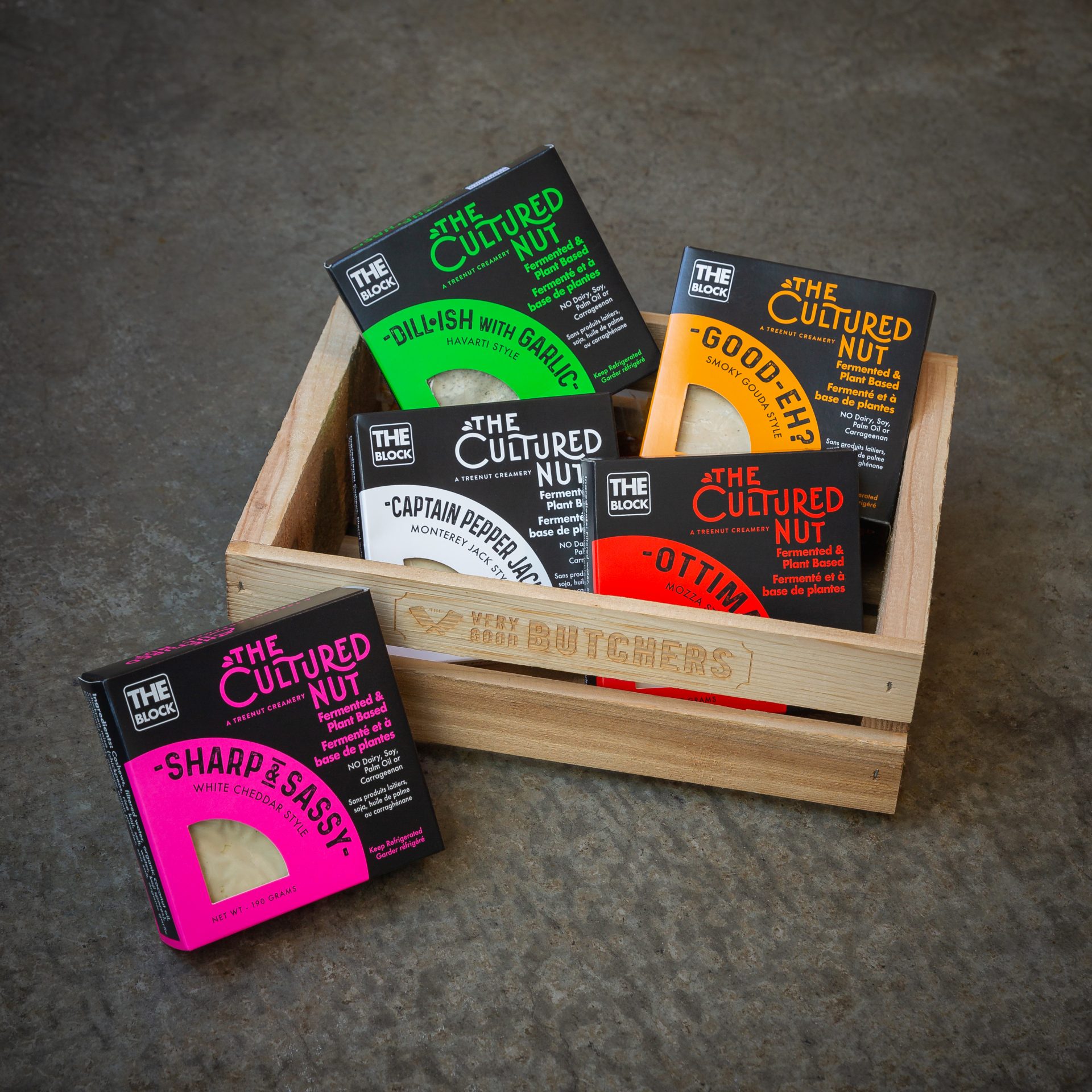 Later, they went on to Dragon’s Den and launched an equity crowdfunding campaign.

“We raised $600,000 from 250 investors across Canada,” he says. They included customers, friends and family, and expanded to a production facility in Victoria.

Scott says 10 months ago, the company went public as The Very Good Food Company, “and since then, that’s kind of put a lot of fuel on the fire.”

“We’ve been expanding. We’ve been making some great hires. We’re in the middle of opening up a new, much bigger production facility in Vancouver.” 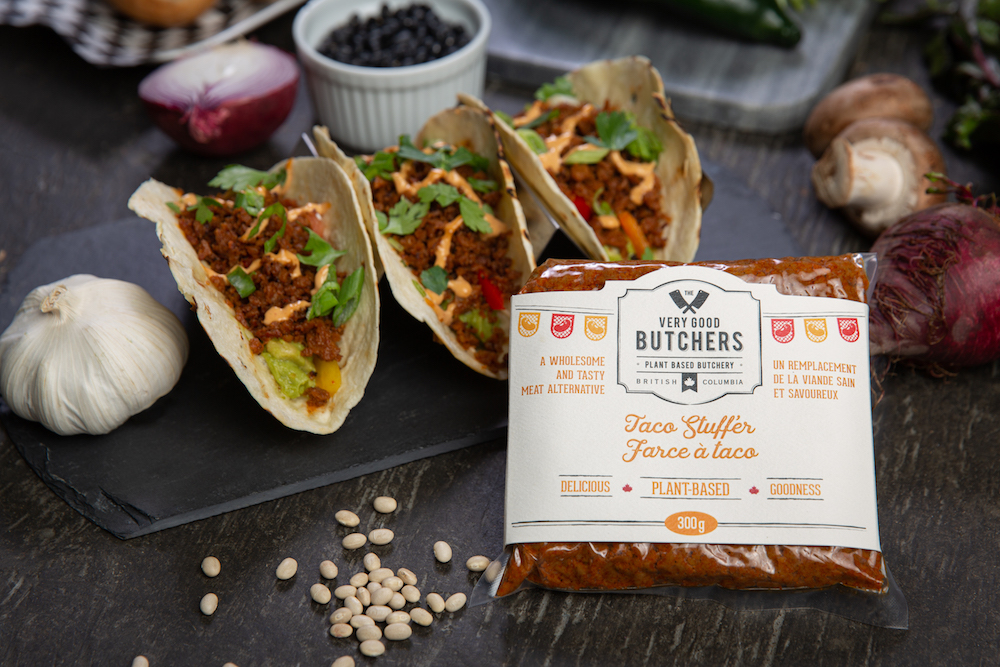 Today, The Very Good Food Company’s products are sold at their brick-and-mortar store in Victoria, online (shipping across North America), and at about 330 grocery and retail stores across Western Canada. Scott says they plan to expand the company to the east coast and the US this year.

According to Scott, the company is worth around $400 million. “We’re publicly traded, so it changes day to day.”

“We’re really just excited, you know, having access to capital, being able to scale and grow, and doing all these things we’ve kind of been dreaming about.”

Scott says he’s learned how important it is to hire people who fit the company’s culture and align with its mission. “It makes everything so much easier, and obviously, you need funds to do that,” and “in order to really grow and scale, and to take it to that next level, you can’t do everything yourself, like we kind of did the first couple years.”

During that time, they went from having about 30 employees to 120 in a year, and today they have around 250 staff members.

With more plant-based companies showing up on the market, creating more competition, or going up against popular brands, Scott says, “It is great. I love it,” because “they are creating new customers for everyone.”

Compared to 20 years ago, when there were few plant-based companies to choose from, “Now people are having these experiences with Beyond Burger, the Impossible Burger, and they are being blown away, and they are like, ‘Wow, plant-based foods taste good.’ And now all of a sudden they are more open to trying more of it. They may not go vegan overnight, but they’re going to be definitely open to it and potentially try our products.” 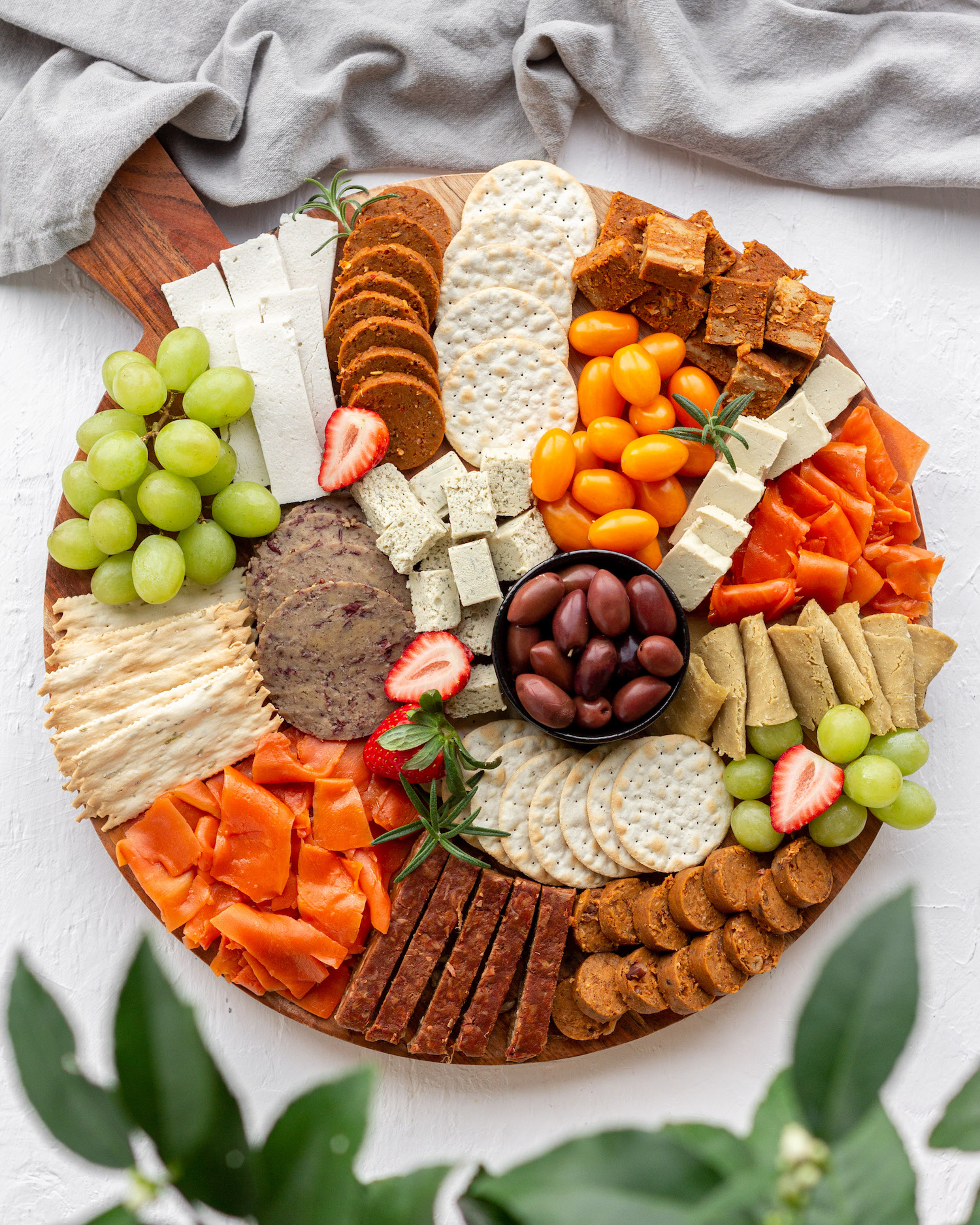 “It’s pretty incredible looking back. The first three or four years were super tough,” he says. “We boosted up business, we poured every penny back into it. There were a lot of sacrifices made along the way.” He added that they are excited about the years to come.

You can learn more about The Very Good Butchers online and find them on Instagram.