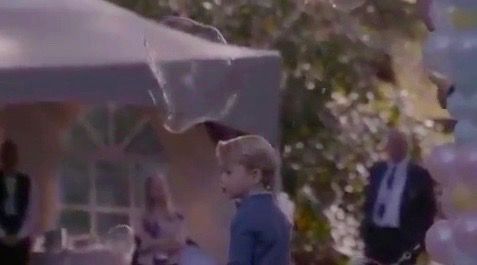 Those are just some of the descriptions being tossed around to describe a thank you video the Royals put out after a birthday party for Prince George and Princess Charlotte was held in Victoria, BC last Thursday.

And it’s not hard to see why.

After a “Thank you, Canada, special moments from Thursday’s children’s party,” is posted on the screen, the usually photo-friendly royal family appears in a what can only be described as dark, slow motion sequel to The Others, The Omen, or just something that will play at a funeral one day.

Currently, the video on Kensington Palace’s Twitter account has been retweeted 666 times. That is not a coincidence.

We’re not entirely sure who made the video, but we are entirely sure someone is going to get fired for it. Watch and see for yourself, but don’t blame us if you can’t sleep tonight.

We have created such happy memories for our children during this visit #RoyalVisitCanada pic.twitter.com/S1v0XO3WvT