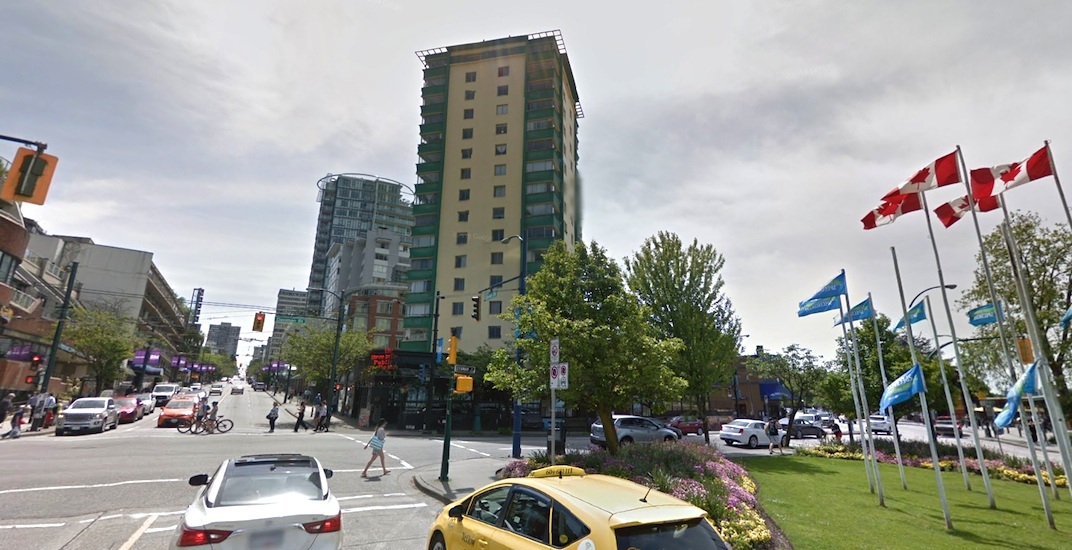 The Berkeley, the green and yellow-coloured tower, at 1770 Davie Street, Vancouver. (Google Maps)

Tenants of The Berkeley tower in downtown Vancouver’s West End neighbourhood staged a protest yesterday ahead of their scheduled eviction to make way for extensive renovations.

Reliance Properties acquired the 1958-built, 16-storey, 58-unit rental building at 1770 Davie Street – the southeast corner of the intersection of Davie Street and Denman Street at English Bay – in 2016 for $43 million.

This past summer, residents were told by the developer that they would be evicted so that a major reconstruction and structural work can be undertaken, as the aging building requires upgrades in order to extend its lifespan.

“Reliance Properties bought this well-known 60-year-old building two years ago and it has never had major upgrades, so we are embarking on significant and crucial remediation – including to the building envelope, life-safety equipment, and energy systems – which will make it healthier for tenants and the environment, plus ensure its longevity,” Jon Stovell, President and CEO of Reliance, told Daily Hive in a statement.

Renovations beginning next year are expected to last for 2.5 years, with the first residents leaving their suites in 2019 and the last evictions possibly in 2020.

The work includes: new plumbing, water, electrical, and ventilation systems; major structural repairs and alterations; remediation of the exterior walls; replacement and energy upgrades of all windows; and rebuilds of all kitchens and bathrooms.

As a result, all apartments will be open to the elements, and without heat, water, and fire safety systems for a significant period.

“I’ve been living here for two decades and you’re basically telling me that I need to move out because you want to turn these apartments into luxury suites,” one of the tenants told Daily Hive under anonymity. “The disruption in our lives will be immeasurable… these are our homes.”

However, Reliance believes its compensation package to residents is more than fair. It is offering each unit $10,000 on average for their eviction, which is double the provincial government’s subscribed regulations that would allocate about $5,000 per unit, with compensation based on length of tenancy and unit size.

“Reliance Properties knows the lengthy and comprehensive reconstruction project is difficult news for tenants, and to reduce impacts, we are significantly exceeding what governments require of us by offering long timelines for vacating, generous compensation packages – almost double what’s required by law – and additional support relocating for those who need it,” continued Stovell.

“Several tenants have already accepted our tenancy package with others doing so this week. Once the comprehensive reconstruction project is finished, tenants have the first right of refusal and may come back at market rents, as per new rules introduced by the provincial government in the Residential Tenancy Act.”

Tenants staged their protest on Wednesday at Morton Park, where the A-maze-ing Laughter statues are located, across the street from the tower.

According to Canada Mortgage and Housing Corporation, vacancy rates for rental apartments in the West End area are hovering at around 1%.

At the Berkeley Towers with 56 tenants facing renoviction! pic.twitter.com/q8oJWhzyt9

“I’m young and I’m open to change, but there’s nowhere to go” already paying half her income on rent. pic.twitter.com/nYUZK6O74T