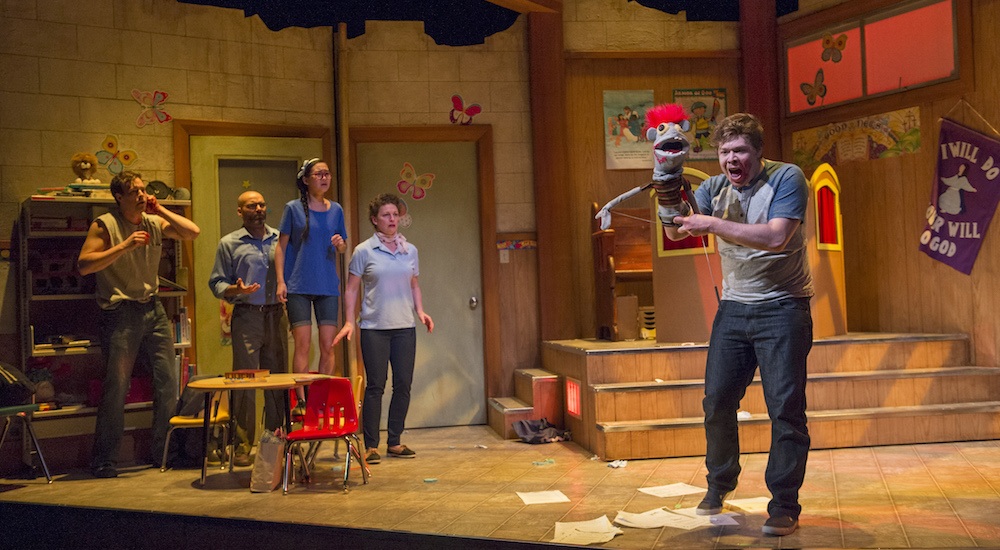 There’s always been something creepy about the puppet and puppet master relationship. For example, the concept of the ventriloquist dummy who gains a mind of its own has always been disturbing.

But the idea of a boy whose hand puppet becomes possessed by the devil in a Texas church is next level creepy. Combine that frightening theme with outrageously sexual and contemporary humour and you have yourself a winning show.

Arts Club Theatre Company’s latest play is all of that. Hand to God is a combination of Are You Afraid of the Dark?, The Exorcism, Santa Clarita Diet and Avenue Q. Seeing this show is a unique experience, as you’ll find yourself howling in laughter while terrified at the same time.

The plot involves Jason, an awkward teenage boy whose father has recently passed away. To keep herself and her son busy, Margery runs a puppetry club for teenagers in their church basement. As the show begins, we meet the two other kids besides Jason who are part of the club – the headstrong Jessica, and troublemaker Timothy. 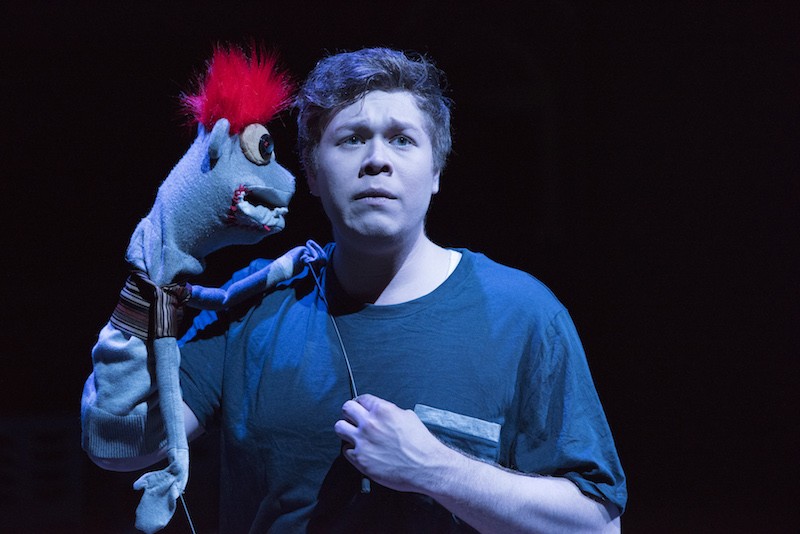 Margery, suffering a low point in her life after losing her husband, pretends not to notice how pathetic her puppetry club is. And no seems to be making things easy for the poor woman. Young Timothy has the hots for her, as does the ridiculously cheesy Pastor Greg who tries to use his church and God talk to manipulate Margery into dating him.

In the midst of all this silliness, Jason has finished creating his hand puppet, Tyrone, whom he uses to sing church hymns. But Tyrone soon starts to take a demonic life of his own, to the point where Jason no longer has control over him, and the characters are sent screaming for their lives. 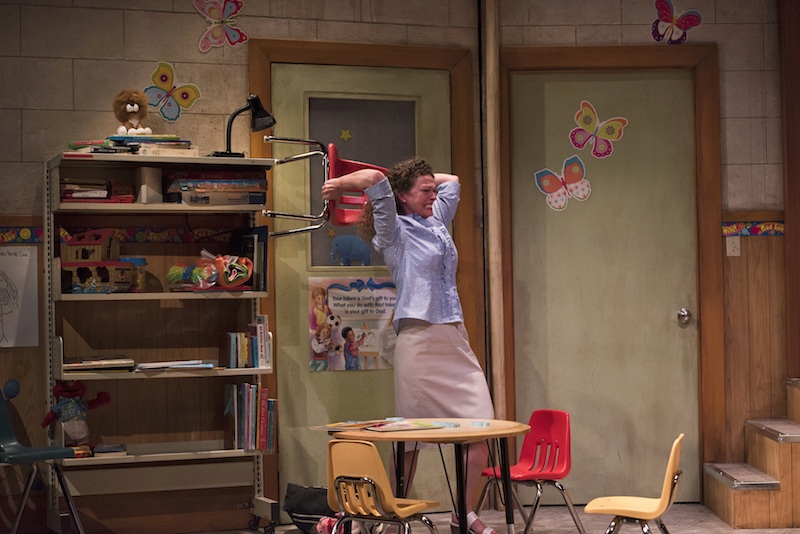 Above all else, this show is over-the-top hilarious, including a racy puppet sex scene. If you’ve seen Avenue Q, you’re no virgin (no pun intended) to witnessing puppets getting off on screen. However, the puppet sex in Hand to God makes even Avenue Q’s sex scene seem innocent.

Oliver Castillo delivers a standout performance as young Jason and his demonic puppet Tyrone. Castillo is brilliant in essentially playing two characters simultaneously. Watching Tyrone revel in graphic sexual activity with a female puppet, while innocent Jason winces in disgust is a highlight of the show. And Castillo is eerily masterful in enacting battles between Jason and Tyrone, where the puppet master tries to escape from his puppet. It’s amazing how Castillo is able to change his voice when speaking as the demonic-sounding Tyrone. 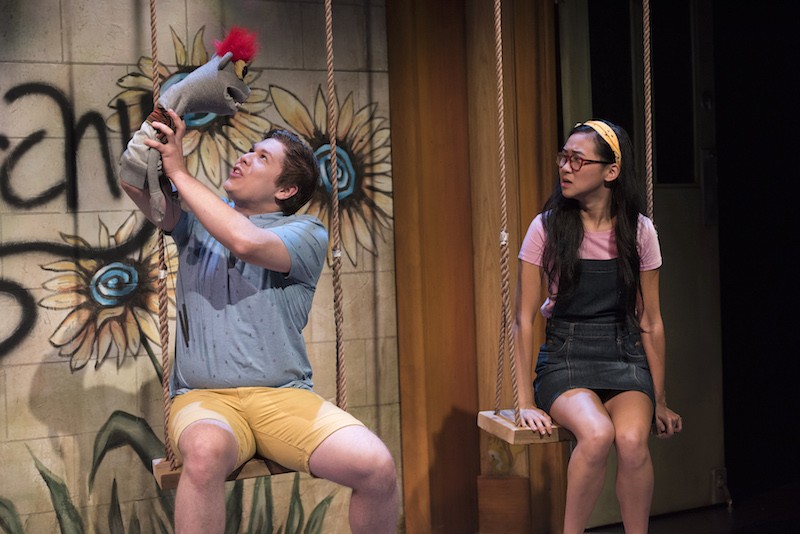 As Margery, Jennifer Lines holds the show together with her empathetic portrayal of a broken mother who just can’t seem to catch a break. As a widow and mother trying to pick up the pieces of her life, she’s hounded by a hormone-crazed teenage boy, a hormone-crazed pastor, all while trying to deal with the fact that her son’s puppet seems to be possessed. Lines does an outstanding job maneuvering her character’s constant emotional changes, which understandably are all over the map.

Julie Leung is cool as a cucumber in her performance as Jason’s friend, Jessica. Her portrayal of Jessica as a level-headed, smart-thinking kid is a nice balance to all the craziness flying around the stage. Mike Gill is hilarious as the rowdy bad-ass kid Timothy. His wannabe teenage hoodlum act and irrepressible adolescent sex drive is bang on for his character. And Shekhar Paleja rounds out the cast perfectly with his somewhat twisted Ned Flanders-like version of Pastor Greg. 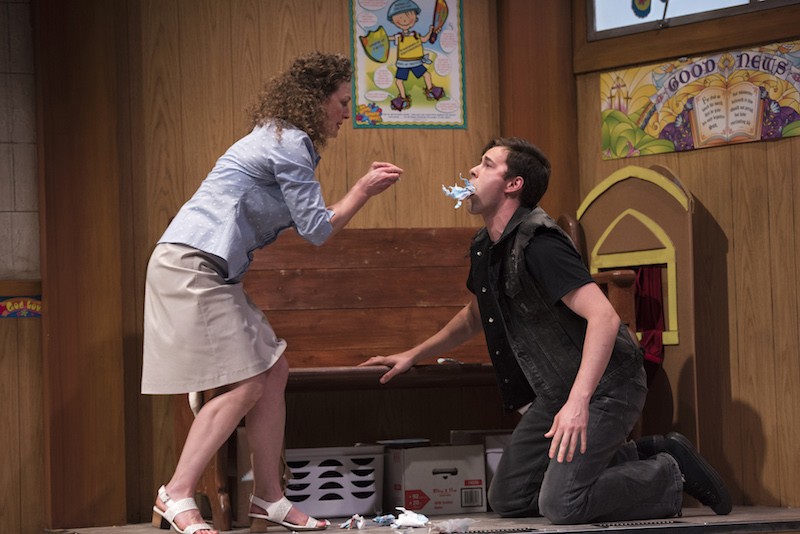 Deserving of praise is Brian Ball’s extremely functional set design. You can’t help but chuckle while watching all the demon-possessed puppet drama unfold in Ball’s concept of a church basement, with its child-friendly furniture and Christian posters on the walls. But what really makes Ball’s set a ton of fun, is its ability to break into pieces, as the characters engage in wild sexual escapades, temper tantrums and demonic outbursts.

With all the movies and stories about devil possession, Hand to God is a fresh take on the subject matter. It resembles an HBO or Netflix Original series such as Santa Clarita Diet, in that it takes a dark theme, humanizes it to relate to contemporary society, and doesn’t hold back on gruesome visuals or language. You feel guilty roaring in laughter throughout the show, because what’s happening on stage seems so wrong…but so funny at the same time.

Behind all the campy humour and fun of Hand to God, there’s also an intriguing and slightly disturbing message underneath. Whether Jason’s puppet is actually possessed or whether this is just the issues of a repressed teenager surfacing in the form of a “possessed” hand puppet is up to audience interpretation. It’s some extra food for thought that comes with this wickedly funny and spooky play.

When: Running until June 25